We look in the drawers of history and find abundant support for Knoxville's claim as the "underwear capital of the world" in the 20th century. 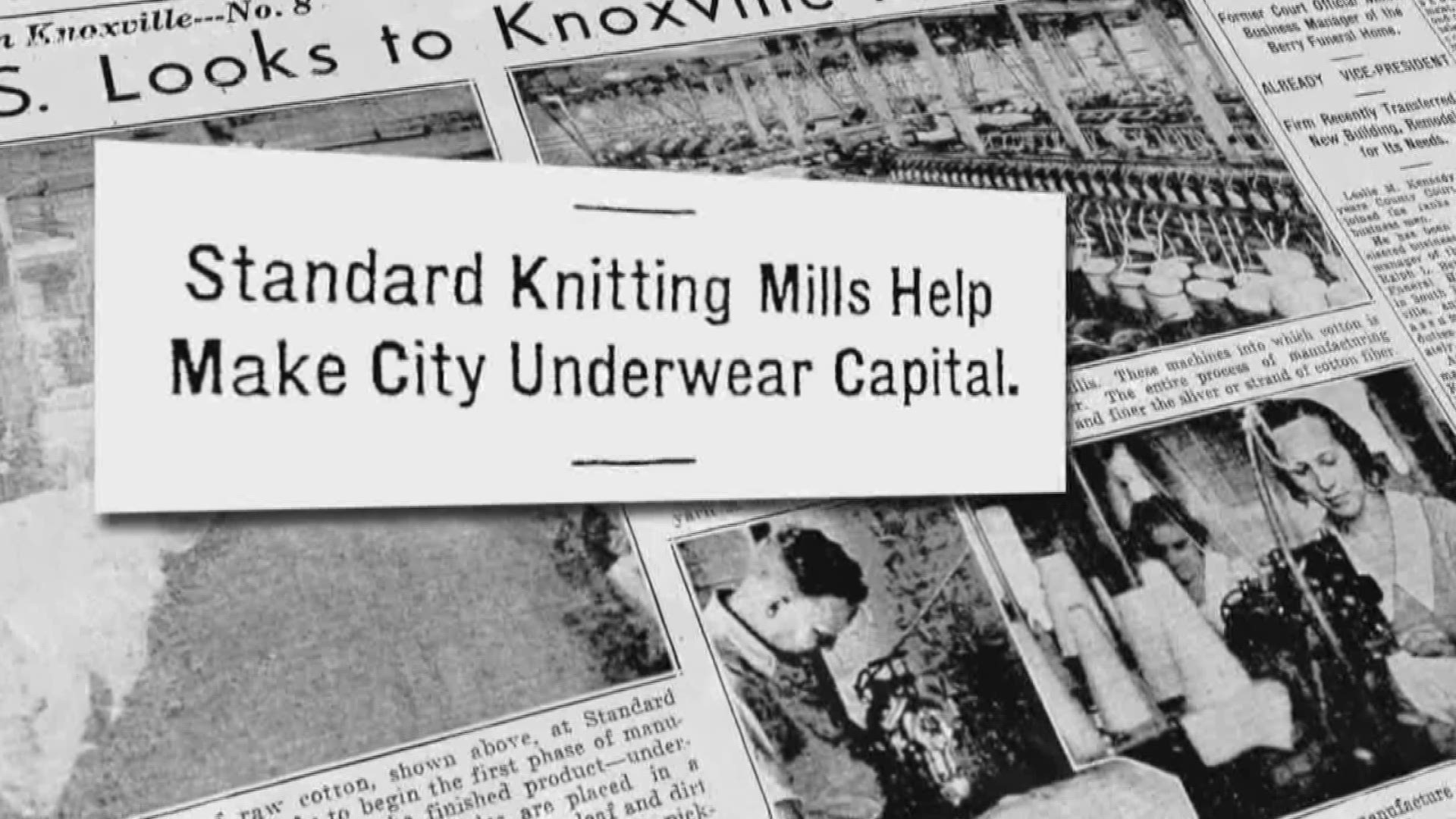 Knoxville's industry and spunk has earned the city nicknames ranging from "The Marble City" to "Scruffy City." Yet, it was the fabric of the city's economy in the 20th century that made Knoxville a "capital of the world."

"Knoxville was known as the 'underwear capital of the world' because of all the underwear manufacturing. At one time, there were 13 textile mills in Knoxville. It was enormous," said Jack Neely, executive director of the Knoxville History Project.

Neely can spin an honest yarn about the magnitude of the mills, especially when reflecting on the Standard Knitting Mill just east of downtown.

"The old Standard Knitting Mill, most of what is left is a later addition to a mill that has been here since about 1901. It was the single-biggest employer in Knoxville at one time when more than 3,500 people worked here. At one time, it claimed to be the biggest textile manufacturing plant in America. They made 43 million garments a year, just an incredible number. They mainly made undergarments, t-shirts, and underwear," said Neely.

Knoxville became one of the industrial hubs of the South in the decades after the Civil War. Railroads and industry intertwined with a large workforce to form a tapestry of textile mills. Brookside Mills came first in North Knoxville, followed by Knoxville Woolen Mills and a dozen others that manufactured canvas, hosiery, wool, jeans, and cotton items.

Newspaper headlines in the 1930s verify Knoxville's one-time title of underwear capital of the world.

"It was incredible, the number of things Knoxville made for the whole nation," said Neely. "We had another place called Appalachian Mills that made long johns or 'union suits' as they called them in those days. We had three different hosiery mills that made socks, which is another kind of underwear."

In the 1930s, Knoxville emerged from the Depression with another textile boom that included the new bombshell of briefs or "jockey shorts." Advertisements called the jockey shorts a revolution that could make "every man resemble the brawny Tarzan of vine-swinging fame."

Knoxville plants landed huge contracts to cover the military with thermal "longies," boxer shorts, t-shirts, and other garments. Breathable cotton t-shirts were especially appreciated by men serving in the sweltering tropics of the South Pacific.

After the war, Knoxville kept cranking out undergarments for the military and civilians. Yet, within a decade, many mills were hanging by a thread and eventually shut down.

"Foreign competition was part of the reason we started losing our textile mills in the 1950s. We lost them piece by piece. With all these huge employers shutting down, Knoxville lost 10 percent of its population in the 1950s," said Neely.

While most of the mills permanently unraveled, Standard Knitting Mill saw growth in the 1959 and sales soared with one of the nation's most popular brands of underwear.

"The Healthknit brand, which you saw all over the country and the world, was all manufactured right here at Standard Knitting Mill," said Neely.

The Healthknit brand went beyond bland boxers and briefs and threaded its way into a new market of colorful expression in the 1960s and 1970s.

"We forget that t-shirts were just underwear for a long time. They were all white. About the late 1960s, you started seeing pictures and slogans on t-shirts. A lot of the cool new t-shirts with 'Keep on Truckin,' Mickey Mouse, and all these things the hippies were wearing were made here [at Standard Knitting Mill]." Neely added, "I had a friend whose dad worked here. We were able to come here and see all the new crazy t-shirts before the people in San Francisco were wearing them. It was surprising that there was a hip side to underwear manufacturing."

Interior of the Standard Knitting Mill in 1979.

WBIR coverage of the Standard Knitting Mill in the late 1970s portrays a business that has remained immune to an overall downfall in American textiles. The reporter says, "Standard has been lucky. They haven't had a major shutdown since 1955. And, in fact, in the past few years they've had too much overtime rather than too little work."

Eventually, the economic pressures in the 1980s unfolded to doom Standard Knitting Mill. With Asian products invading American markets, the mill was forced into a series of layoffs.

In September 1988, Standard Knitting Mill sold out to Delta Manufacturing. Leadership with Delta spoke for months about expansions and improvements to the plant. The CEO told then-mayor Victor Ashe it would absolutely never close the mill in Knoxville. In June 1989, Delta announced it would shut down the mill, a move that would suddenly hang hundreds of surprised employees out to dry in 60 days.

Delta said the cost of running the 1 million square-foot plant was too expensive. It closed the Knoxville mill and increased production at its other plants in Tennessee.

Hundreds of workers sewed their last stitch at Delta on August 11, 1989. The shutdown also resulted in the closure of adjacent businesses that served the workers, including Betty's Restaurant.

Many of the old mills have been razed or repurposed. Cherokee Mills on Sutherland Avenue is home to the Knoxville Neurology Clinic. Standard Knitting Mill, however, has remained standing while struggling for decades to find serious suitors for the sprawling space. It sits vacant and heavily-vandalized while other old buildings in the area have found new life. Knox Heritage has routinely listed the mill as a top priority on its annual list of fragile properties.

Until it can find a new use, the old Standard Knitting Mill provides a peek at the past when mills intertwined to make Knoxville the "underwear capital of the world."

Neely says Knoxville potentially has another undergarment claim to fame. The website for Bike Athletic claims it made the world's first "jockey straps" in 1874 in Knoxville. The supportive suspension device was designed to benefit people riding bicycles on bumpy cobblestone streets in Boston.

"I have seen some assertions that the first jockstraps were made here by national sources, including the Bike website. I have not been able to find any local sources during that eras to support the claim. I would really like to nail it down as fact, but haven't yet," said Neely.