It's unclear whether Nashville will begin play in 2020, as originally proposed, or earlier in 2019, which the commissioner didn't rule out. 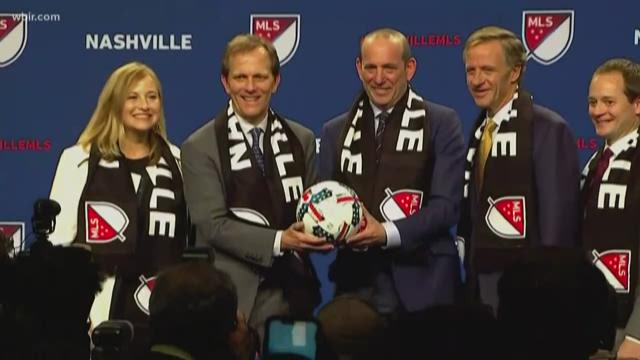 In front of a boisterous, electrified crowd of scarf-wearing Nashville Soccer Club fans and city boosters, MLS Commissioner Don Garber made the worst-kept secret official Wednesday, telling a crowd at the Country Music Hall of Fame and Museum that Nashville has been picked for league expansion.

The news leaked the previous morning. But this was a moment for celebration — a party, really — as soccer fans marched into the event chanting and heard the news they wanted to hear from the only man who could deliver it.

"This is a city that we've really fallen in love with," Garber said in an interview. "Everything about it fits our brand. We're young. We're on the rise. We're very diverse. We're very interested in trying to do things a bit differently than the other pro sports leagues have done. We recognize that we've just finished our 22nd season. We've got generations of growth in front of us."

Soccer fans cheer in the lobby of the Country Music Hall of Fame outside the announcement that Nashville is getting a Major League Soccer expansion franchise Wednesday, Dec. 20, 2017, in Nashville, Tennessee. Photo: Andrew Nelles, The Tennessean.

It's unclear whether Nashville will begin play in 2020, as originally proposed, or earlier in 2019, which the commissioner didn't rule out. Garber said a decision will be announced later.

Nashville was one of the last of an original group of 12 cities to join the race for the next wave of expansion teams in the fast-growing MLS.

It made it a self-described “underdog” in the beginning, but lead local owner John Ingram, billionaire chairman of Ingram Industries Inc., steadily steered Nashville up the ranks.

Bill Hagerty, a Nashville businessman who kicked off Nashville’s bid a year and a half ago before being appointed U.S. ambassador of Japan in the Trump administration, was not on stage but later attended the celebration.

"Damn right, we accept (the invitation)," Ingram said after Garber's announcement. "We're only here making this announcement because we live in a city that works together and a city that thinks big."

Ingram said Nashville accomplished in one year what might have taken other cities two or three years to accomplish.

He also said he would assume the role as an "engaged curator."

'We also are a soccer city,' mayor says

In its push for MLS expansion, Nashville was aided by a popular brand that continues to resonate far outside Tennessee. 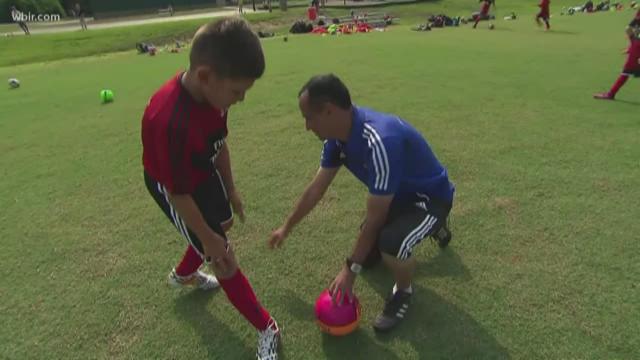 The city’s bid also got a key assist from Barry, who pushed an expedited timeline for the Metro Council to approve $225 million in revenue bond funding to go toward a $275 million stadium project at the fairgrounds.

Stadium construction — still contingent on a few additional votes in the council, including the demolition of some existing fairgrounds buildings — won’t begin until the end of 2018.

In the meantime, the team will have to find a temporary venue. Ingram said Nissan Stadium, home of the Tennessee Titans, is the most likely option, but he didn't rule out other possible venues.

"This is amazing, y'all, and completely exciting for us to be here today," Barry said.

Barry then thanked the Metro Council members who "made this possible."

Barry said with it being the holiday season, it is a great time to give and receive and Nashville is getting the best gift ever.

She said the fairgrounds and speedway would be kept intact after the soccer stadium is built.

"It's definitely Music City, but we also are a soccer city," Barry said.

Other cities in the running

Cincinnati, Detroit and Sacramento, California, were the other finalists for the expansion franchise won by Nashville, and they appear to still be in play for another spot the league plans to fill.

Garber said an announcement on the timetable for future expansion will be coming Thursday.

The decision to enter Nashville — which carries some risk because Nashville, unlike other cities, has not proved it can support pro soccer — makes MLS the third major sports league to locate to Music City, joining the National Football League and National Hockey League.

The Tennessee Titans and the Nashville Predators have been supportive of Ingram’s push for MLS. The addition of an another pro sports team will challenge Nashville’s capacity for ticket sales and fan support across three major leagues.

Nashville’s ongoing soccer buzz began in May 2016, when Nashville was awarded a USL franchise, Nashville SC. Even with the MLS news, Nashville SC is still slated to hold its inaugural season this spring at First Tennessee Park, home of the minor league baseball Nashville Sounds.

The focus on MLS initiated in August 2016 when Hagerty launched a committee of around two dozen business and political heavyweights to try to bring MLS to Nashville.

Although Nashville was already primed for a USL franchise, Hagerty argued then that Nashville faced a fast-closing window if it ever wanted MLS, and that the city had to move immediately.

Hagerty later passed the baton to Ingram, who signed on last December as controlling owner and lead investor of Nashville’s MLS bid. Son of philanthropist Martha Ingram and a member of one of the city’s most prominent families, Ingram’s involvement gave Nashville’s bid the backing it needed to attract the eye of MLS.

Meanwhile, soccer fans ate it all up on Wednesday. Rowdy fans made a loud entrance before the news conference with chants, drums and an air horn.

Jason Moles, a fan with the Nashville Roadies, manned an air horn as chants of “Nashville” filled the room.

Moles, 42, from Lebanon, said he runs a youth program and a Nashville MLS team is exactly what the region needs.

“This is absolutely what we need,” he said. “And it was totally unexpected. This was just a pipe dream 12 months ago.”

But it’s a perfect fit, he said.

“Soccer in Nashville is about community and it’s about reaching across community lines," Moles said.

Reach Joey Garrison at jgarrison@tennessean.com or 615-259-8236 and on Twitter @Joeygarrison.