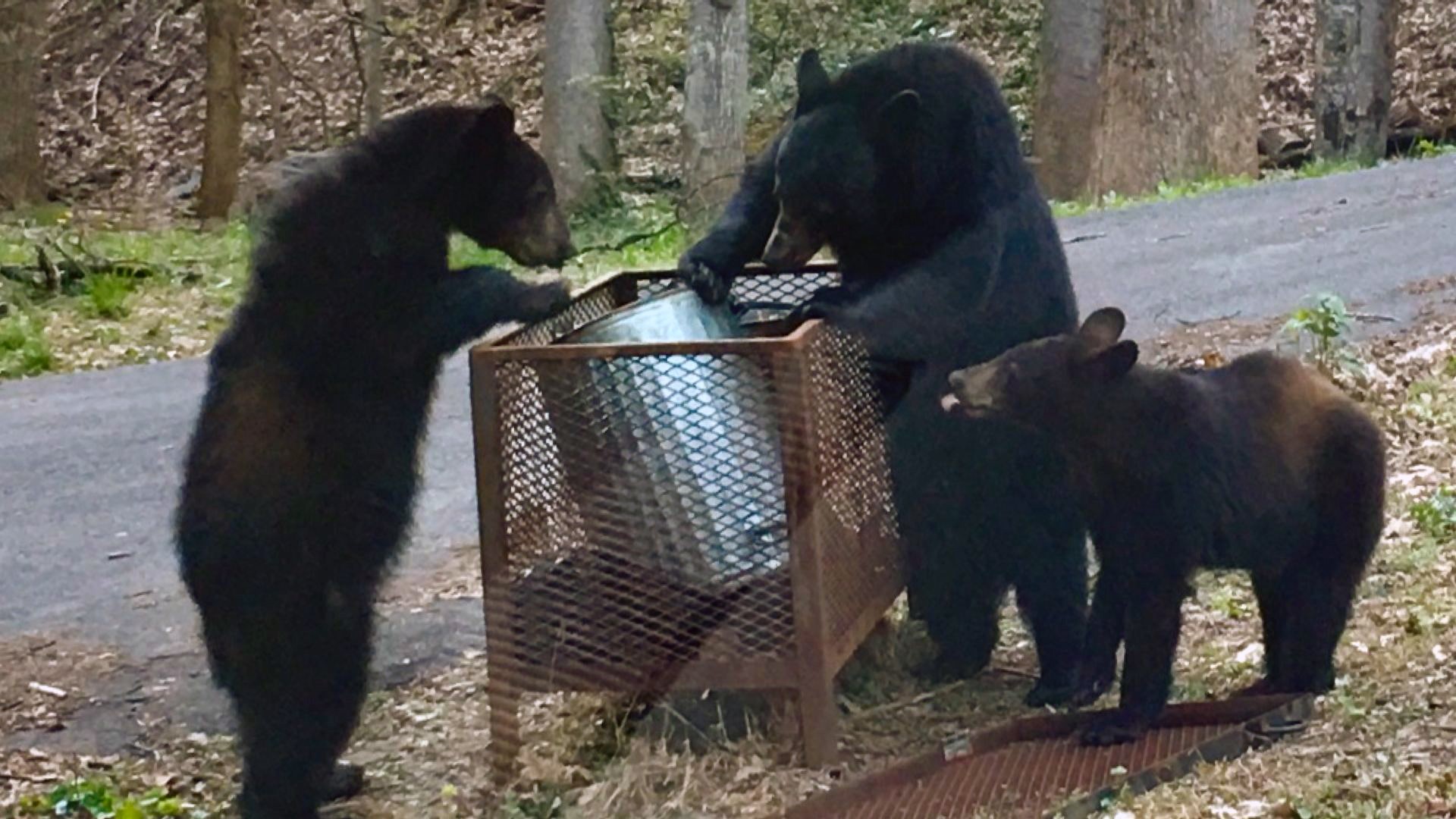 GATLINBURG, Tenn — Memory is often developed through repetition and reinforcement.  In Gatlinburg's Chalet Village, the black bears remember every easy meal and repeat the rewarding behavior.

"The craziest situation has been getting six bears out of six different cars in the last four weeks alone here in Chalet Village within a couple of blocks of my house. It is not cute and it is not funny.  It's a safety risk," said resident S.J. Geis. "The bears can smell any food or candy wrappers in cars. They break in. Four of the cars with bears inside were visitors renting cabins. Two were contractors."

People who live and work in all the gateway communities and counties surrounding the Great Smoky Mountains National Park (GSMNP) are teaming up to repeat a strategy that helped reduce human-bear conflicts in the past.  They have revamped the Smoky Mountains BearWise Community Taskforce to tackle the complex problems created by a growing population of people and bears.

Credit: WBIR
A back bear sits in a jeep it broke into searching for food in Gatlinburg's Chalet Village neighborhood. Photo by S.J. Geis.

Since 1990, the bear population has tripled to approximately 1,600 animals. The number of people living in Sevier County has doubled to around 100,000. Tourism in the Smokies has grown from 8 million to 12.5 million annual visitors.

The BearWise taskforce was created in September 2016, but it was almost immediately sidetracked by the historic deadly wildfires that ravaged Sevier County and the national park.  The group regained momentum a few months ago, only to find itself dealing with another historic obstacle.

"This taskforce is really committed to continue our mission and have not let the COVID-19 pandemic stop us from meeting and making progress," said Jeff Hunter with the National Parks Conservation Association (NPCA).  "This is something that is really important for the people who live around the park, the businesses, and the bears."

While bears quickly learn how to land an easy meal from our trash, bird feeders, and other attractants, the communities that surround the Smokies often struggle with short-term memories.  New waves of tourists constantly show up with no prior knowledge of how to behave around bears.  As soon as you teach them, they're gone and you have to start from scratch with the next round of visitors.

Credit: WBIR
A portion of a fact sheet on the Smoky Mountains BearWise Community TaskForce.

Whether they know anything about bears or not, they almost all want to see a bear.

"We get asked at least a dozen times a day about the best place to see bears," said Bill Morrissey, general manager of the Nantahala Outdoor Center (NOC) in Gatlinburg. "We don't just tell them where to go. We want to make sure they know how they impact bears and how to be BearWise."

Morrissey said although people visit the area to see bears, a conflict with a bear is bad for business.

"In the last year, we probably had about a dozen visits from bears actually coming on our front porch. You can't go in or out of the store. Bear safety is part of our employee training," said Morrissey.  "All it takes is one bad accident or conflict with a bear and it could be extremely detrimental to a business and a community.  We want to get at the root of the problem, what is driving these bears downtown.  Bottom line, it is coming down to food."

Morrissey said the BearWise taskforce is an important effort because it includes residents and business owners.

"I was one of those tourists who was excited to see a bear, no matter what. Being part of this group has really opened my eyes to why it is important for the bears and the ecosystem and this area to be BearWise. People can start to tune out government agencies. It can have more impact when it's your neighbors with everyone working together to educate and keep bears safe," said Morrissey.

The goals of the group include finding ways to reach tourists.  Ideas include handouts at rental cabins and placemats at restaurants that quickly teach people about bears.

The ordinance in Gatlinburg was a proactive step a few decades ago. However, it only covers a small portion of the city. New GPS research shows bears travel great distances directly through the ordinance zone to reach garbage throughout the counties surrounding the national park.

"You can bear-proof one street. But if your neighbor is not bear-proof, you're kind of shooting yourself in the foot. We need to step back and look at a wider area," said GSMNP wildlife biologist Ryan Williamson in a 2019 interview.

One example of inconsistent bear-proofing is at Gatlinburg City Hall on Highway 321.  The southern side of the highway requires bear-resistant trash cans that are difficult for the animals to break into. Bears only have to cross the street to get out of the ordinance zone and find flimsy trash cans overflowing with garbage.

Geis said she would like to see the bear-proof requirements expanded. She also wants better enforcement of the current ordinance.

"There are some homes that have been cited several times and still avoid fines. We need to enforce the rules we have. There are people who don't lock their trash cans or have them overflowing where you can't close them," said Geis.  "How many times can you say secure your trash? Secure your car. Secure your home. Stay 50 yards away from bears. 'A fed bear is a dead bear.' These are all BearWise basics and we all have to keep saying it for the sake of people and the bears," said Geis.

Geis is optimistic the BearWise taskforce can help educate and empower people to understand how our habits influence the behavior of bears.  For example, many bears hit by cars are roaming into high-traffic areas in search of food from human sources.

Geis said repetition and reinforcement is required to ensure everyone remembers bear safety.

"When a bear breaks into a car, a trash can, a home, it's not good news for the bear. The bear is often deemed a nuisance and has to be euthanized. This area is a wonderful place to live and visit. But we also need to hold ourselves accountable and do what's right to safeguard ourselves and the bears," said Geis.

If you are interested in more information about the Smoky Mountains BearWise Community Taskforce, please contact Bill Stiver at bill_stiver@nps.gov.