Naloxone, also known commercially as Narcan, is administered by first responders when a person is suspected of overdosing on opioids. 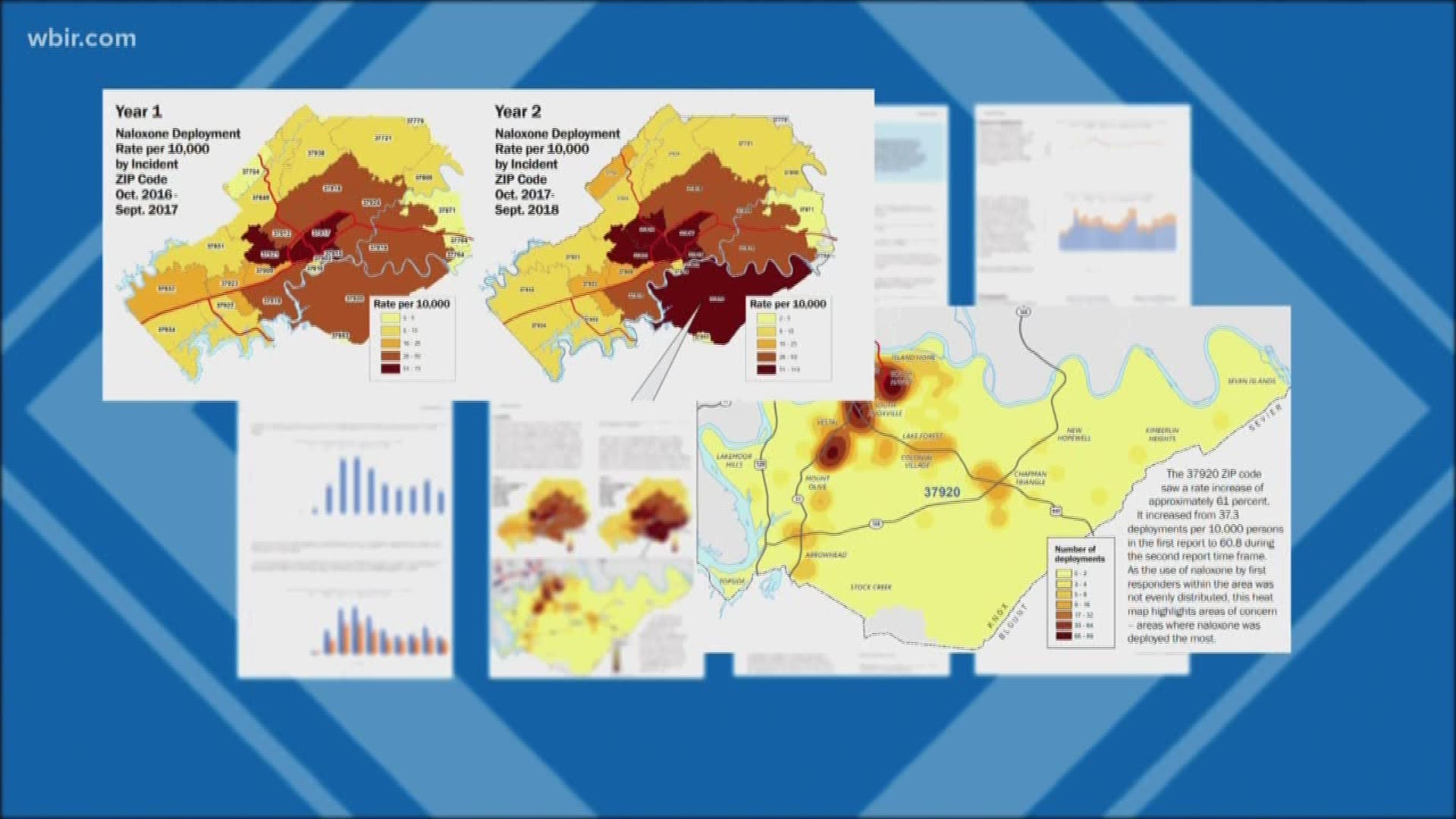 KNOX COUNTY, Tenn. — The Knox County Health Department, with the support of the Harm Reduction Coalition, released its second report Monday on naloxone deployment by first responders. It found that more than 2,700 individuals received naloxone from Oct. 1, 2016 to Sept. 30, 2018.

The Harm Reduction Coalition is studying naloxone deployment and releasing the findings to help both the coalition and the larger community better understand the substance misuse epidemic.

"Since Oct. 1, 2016, nearly 3,700 doses of naloxone were deployed by first responders in Knox County. More than 250 individuals required the medication on more than one occasion over the span of 24 months. More deployments occurred in winter months with peak deployment occurring in January. This pattern was seen during both years of data collection," the report said.

It also found that white males ages 25 to 39 received naloxone most frequently. Since 2017, the report found the number of individuals receiving naloxone increased by 7.7 percent.

Last year, the Metro Drug Coalition announced that more than 1,200 people received naloxone in Knox County from October 2016 to September 2017.

Similar to the demographic makeup of Knox County, individuals who received naloxone were predominately white. The report found black individuals made up 8 percent of those receiving naloxone, while 10 percent of individuals did not have race/ethnicity listed or declined to provide the information.

The 37920 ZIP code saw a rate increase of approximately 61 percent. It increased from 37.3 deployments per 10,000 persons in the first report to 60.8 during the second report time frame. As the use of naloxone by first responders within the area was not evenly distributed, this heat map highlights areas of concern – areas where naloxone was deployed the most.

“It’s crucial that we have comprehensive data and that we use it to inform how we address this devasting issue, only then can we develop a more targeted and effective response,” said KCHD Director Dr. Martha Buchanan. “While the information in this report will help advance our efforts and those of our partners, it’s important to note that these findings are just the tip of the iceberg. There are likely many, many more people in our community suffering from substance use disorders.”

RELATED: Year in review: 2018 proves to be another deadly year in the fight against opioids

The Harm Reduction Coalition asks the community of Knox County to consider the following actions:

• Learn how to use naloxone

• Carry naloxone with you to potentially save a life

• If you are a parent, talk to your child about substance misuse: drugfree.org/

• Safely dispose of all unused and no longer needed medications: countitlockitdropit.org