The state Supreme Court order came down Friday. A statewide group of defense attorneys also has called for justice system changes in response to virus threats. 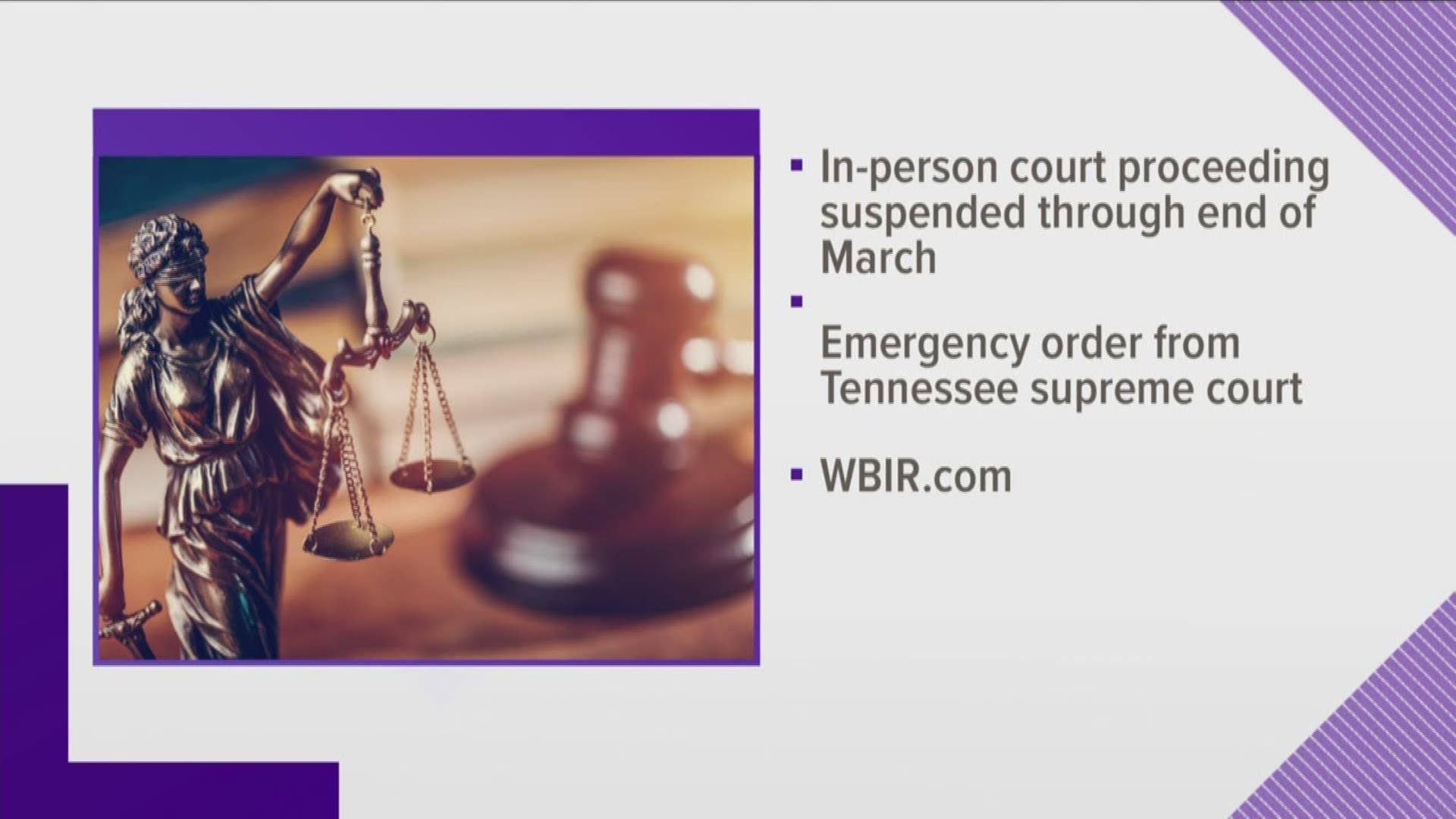 KNOXVILLE, Tennessee — Most in-person judicial proceedings in Tennessee are being postponed for the rest of March, but state courts will continue to operate, according to an emergency order Friday from the Tennessee Supreme Court.

The court is moving to reduce the number of mass gatherings of people in courts while also ensuring that judicial personnel can keep doing their jobs and the judicial system can continue to function, the court announced Friday.

Judges and clerks will remain on the job.

Generally speaking, if they haven't started already, criminal and civil trials will be put on hold through the rest of the month, the order says.

All in-court proceedings that occur "will be limited to attorneys, parties, witnesses, security officers, and necessary persons as determined by the trial judge."

"We encourage judges, court clerks, attorneys, law enforcement and others to work together to develop creative solutions that work for their individual jurisdictions," a statement from Chief Justice Jeff Bivins reads. "The goal is to limit the number of people coming into court each day while continuing to meet our duty and administer justice."

Knoxville City Courts announced it will be suspending all in-person judicial proceedings starting March 16 through March 31.

Knox County Civil and Criminal Court jurors should not report to duty through March 31 even if they were summoned.

There's a long list of exceptions to Friday's order. Also, phone and video conferencing can continue and may offer an obvious option in lieu of in-person proceedings, the court said.

The order is subject to change, according to Bivins. He noted the unusual circumstances the nation now finds itself in with the threat of the highly contagious virus.

Earlier Friday, the Tennessee Association of Criminal Defense Lawyers, or TACDL, called on criminal justice leaders to adjust how they're currently handling inmates in custody and people accused of crimes.

"The Knoxville Police Department is continuing to monitor the public health threat posed by COVID-19 while working collectively with the City of Knoxville, the Knox County Health Department and other public safety entities, and has plans in place to maintain the continuity of law enforcement operations while prioritizing public health and safety if further issues arise. The KPD will follow the recommendations of the Centers for Disease Control and Prevention as it pertains to protection from exposure, assessment of risk factors, response to signs, symptoms and possible exposure, and limiting communal spread."

Finally: "The order expressly does not prohibit court proceedings by telephone, video, teleconferencing, email, or other means that do not involve in-person contact. The Court’s Order also suspends any Tennessee rule, criminal or civil, that limits a judge’s or clerk’s ability to utilize available technologies, including telephone conferences, video conferences, and video arraignments, that can help limit in-person contact. The Order does not affect a court’s consideration of civil or criminal matters that can be resolved without oral argument."

TACDL President Jonathan Cooper, a Knoxville defense attorney, said members of the defense bar are concerned about how their clients' constitutional rights will be preserved in the midst of the current uncertain atmosphere.

People accused of crimes have the right to a speedy hearing or trial, he said. The system needs to ensure they're not lost in the shuffle inside the county jail.

Delaying a defendant's opportunity to see a judge, even for a few weeks, has "significant repercussions," he said.

He said he's concerned inmates may feel "undue pressure to resolve their case on a plea of guilt to get out of jail."

"My personal hope is that defense lawyers and prosecutors can work together to achieve a just result to accommodate these detained persons in this extraordinary time.

"But that may be naïve. We will find out next week," he said.

In its release Friday, TACDL suggested six steps that courts, police and sheriff's offices should consider and take as the state tries to curtail the spread of COVID-19.

*They say all people coming into the jail system should be screened.

*A system for quarantining and isolating inmates should be created for anyone infected with the virus.

*A greater reliance on a pre-trial release program for non-violent offenders to control the number of inmates in confinement.

*Release inmates who are more vulnerable from a health perspective.

*Pause the practice of holding arrestees without bond for probation violations, especially when no new offense has been committed.

*Start using citations more in lieu of arrest "when permitted."

Sheriff's offices in the state are responsible for the jails. Tennessee has 95 counties, and they hold tens of thousands of county and state inmates.

Knox County, for example, routinely holds some 1,400 people in several locations including its main detention center on Maloneyville Road. The majority are accused of crimes but have not been convicted.

The inmates are shuffled in and out of the court system daily for arraignments, hearings and trials.

10News has reached out to the Knox County Sheriff's Office and Knoxville Police Department for comment.

"Once the disease enters the incarcerated population, it is likely to spread quickly among inmates and correction officers," the release from TACDL President Jonathan Cooper of Knoxville states.