"Mountain dew" has multiple meanings and origins in Knoxville. There's good ol' moonshine, the first Mountain Dew soda in 1928, and a 1940s brand of Dew that evolved into one of the world's best-selling soft drinks. 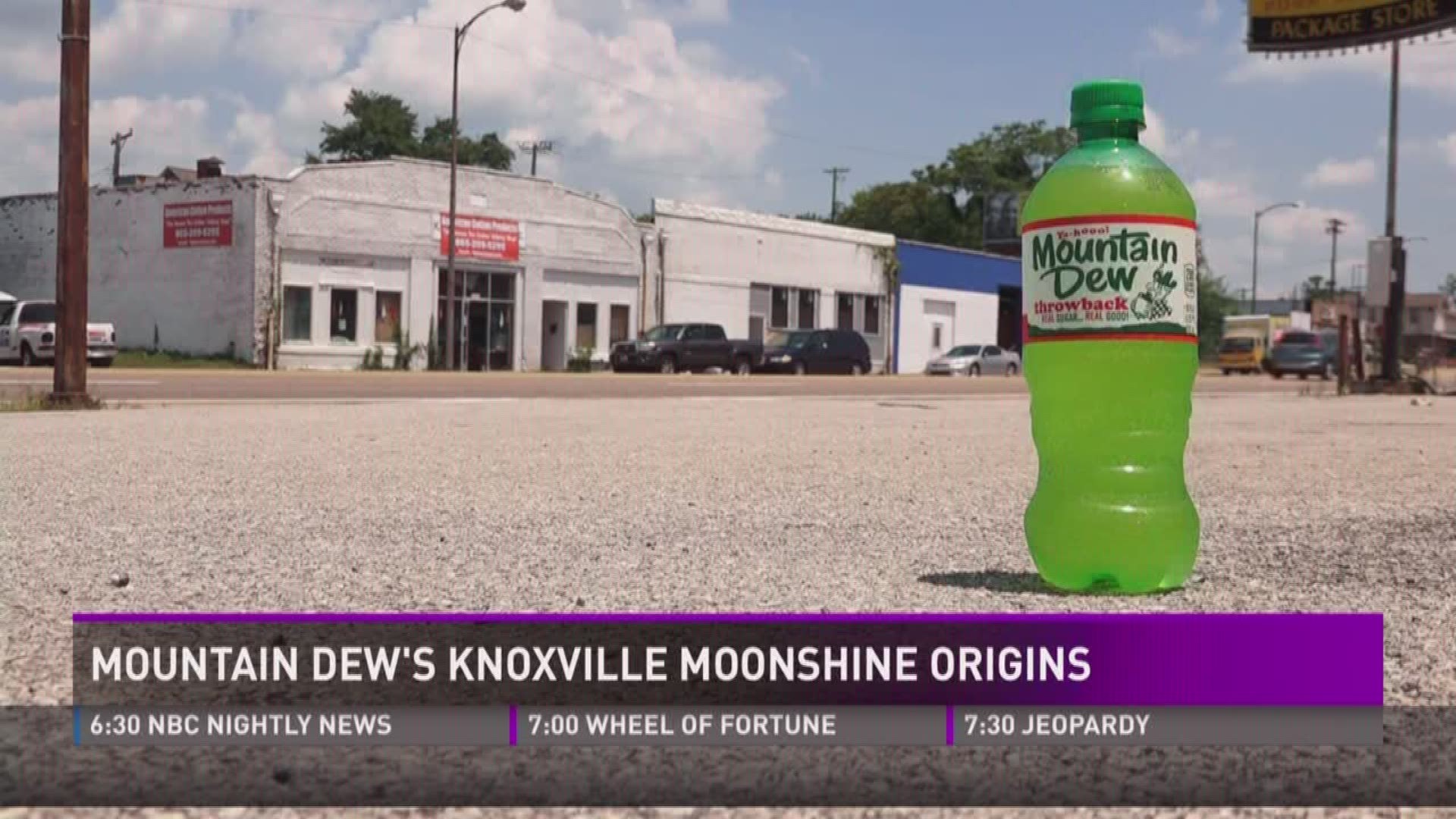 The term "mountain dew" has multiple meanings and origins in Knoxville. These days, the first thought is likely the popular neon soft drink made by Pepsi. For most of the 20th century the phrase referred to high-octane clear Appalachian alcohol straight from illegal stills into glass jars without being aged.

"Mountain dew, before the 1940s, was mainly a nickname for liquor. If you said mountain dew, you meant moonshine," said historian and author Jack Neely. "It was a well-understood term."

Uncle Dave Macon, Grandpa Jones, as well as Willie Nelson have all recorded individual renditions of a popular song titled "Mountain Dew." The chorus of the song says, "They call it that ole mountain dew, and them that refuse it are few."

Throughout the first half of the 20th century, newspapers routinely splashed the words "mountain dew" on front pages with stories about moonshiners and the federal "revenuer" agents who raided the illegal distilleries.

Even during prohibition, people in East Tennessee were playful about forbidden firewater. The Littlefield & Steere candy company in Knoxville made "Smoky Mountain Dew" candy bars for children in 1926. The candy bars sold for the advertised price of "5 cents a swig."

Smoky Mountain Dew candy bars sold in Knoxville in 1926 for &quot;5 cents a swig.&quot; Image is a compositve of photos from the McClung Digital Collection.

In 1927, an established bottler named Max Licht decided to make a new type of mountain dew that could even be enjoyed by teetotalers. The Licht and Son Bottling Company developed a line of non-alcoholic carbonated dew drinks that included Grape Dew, Strawberry Dew, Hun-Nee Dew, and Mountain Dew. Licht developed a glass bottle that looked like a barrel and patented the design.

For much of 1928, Licht heavily advertised his dew drinks "in a bottle like a barrel." This first Mountain Dew soft drink was described as a clear sparkling-white thirst-quencher, with advertisements always noting the beverage was a "pure lemon" drink rather than illicit alcohol.

The first Mountain Dew soft drink was made from 1927-1928 in patented barrel-shaped glass bottles.

It is unclear exactly when Licht stopped making Dew soft drinks, but advertisements in the newspapers taper off near the end of the summer of 1928. Licht and Son was successful at bottling other products such as vinegar and later developed a liquid sugar-substitute called Smoky Mountain Sweetener.

The company was founded in 1899 and the plant that bottled the original Mountain Dew was on South Broadway, approximately where the Sunsphere is located today. Licht and Son relocated to Hall of Fame Drive in 1978 and remained in business until 2015 when Max Licht's grandson retired. He sold the product line to a food services company headquartered in North Carolina.

After Max Licht's original version of Mountain Dew went flat, it took more than a decade before another Knoxville bottler would reincarnate the carbonated beverage. The next attempt would evolve into one of the world's best-selling soft drinks.

"The Hartman Beverage Company on Magnolia Avenue in East Knoxville was the birthplace of the current brand of Mountain Dew," said Neely. "In the 1940s, brothers Barney and Ally Hartman started a soft drink that they wanted to make as a mixer for moonshine. It was something that would mix with moonshine to make it taste better, more or less. They originally only made it for themselves."

"You don't need caffeine when you're drinking moonshine," said Neely. "It was really just there to make the moonshine taste better."

The product shined publicly for the first time in 1947. The Hartman brothers made a run of Mountain Dew soda for a bottlers convention in Gatlinburg.

"They gave it a hillbilly logo. A hillbilly swagger," said Neely.

Barney Hartman's hand-drawn labels featuring "Willy the Hillbilly" were a hit at the convention. The brothers drew up another label with the hillbilly pointing a gun. The trademark for Mountain Dew was approved in 1948 and the current brand was officially born.

"This all happened at a time when, suddenly, hillbillies were cool for the first time ever. I think Snuffy Smith had something to do with it. So did the comic Li'l Abner, which was also a Broadway musical. This was around the time of the Grand Ole Opry, too. The late 1940s and 1950s is even when the University of Tennessee starts using hillbilly mascots and bluetick coon hounds, so all this stuff is going on," said Neely.

While the hipness of hillbillies relied heavily on stereotypes, it was undoubtedly popular. The Hartman brothers capitalized with Mountain Dew hillbilly logos and the slogan: "It'll Tickle Yore Innards."

The Hartmans&#39; 1948 trademark for Mountain Dew. At right, the hillbilly from a 1966 Mountain Dew television ad.

Just a year after launching the Mountain Dew brand, the Hartman Beverage Company was struck by tragedy. Barney Hartman had a heart attack, was hospitalized for months, and died in May 1949. Ally Hartman continued operating the company without his brother, but Mountain Dew was not a big seller in the early 1950s.

"It brought on the other-worldly hue and the high volume of caffeine that Mountain Dew is known for today," said Neely. "For a long time, before all of the current energy drinks came out, Mountain Dew had the reputation of having one of the highest caffeine contents of all the soft drinks."

The Tip Corporation in Marion, Virginia, made the first &quot;new Mountain Dew&quot; by combining the brand from Knoxville with the bright yellow citrus drink from the Tri-Cities.

Ally Hartman eventually sold his shares in Tip Corporation and the rights to the Mountain Dew brand. However, he retained the franchise rights to Mountain Dew in Knoxville and continued manufacturing the popular drink at Hartman Beverage Company.

The new Mountain Dew was so popular, Pepsi bought it in 1964. The company initially continued marketing the product with ads full of hillbilly high jinks. The first television advertisement for Mountain Dew in 1966 used the same melody as the popular mountain dew song. Willy the Hillbilly shouted "Yahoo! Mountain Dew!" and "It'll tickle yore innards!"

"They had the guy that shoots a hole in his own hat, just like all hillbillies do," joked Neely. "They kept that up for a few years, but shed the whole hillbilly theme."

A sign at the Pepsi plant in Knox County says &quot;Knoxville is the Home of Dew.&quot;

Pepsi began to market Mountain Dew for its "barefoot feeling," then told consumers to "dew it to it," and later evolved into a "Do the Dew" marketing campaign. The main advertising images today are full of thrill-seeking, extreme sports, and adrenaline. Pitchmen for Mountain Dew products include Dale Earnhardt Jr. of NASCAR and 2017 NBA MVP Russell Westbrook. The branding has also shortened the word "mountain" to Mtn Dew.

While the color, the flavor, and marketing has changed since the creation of the Mountain Dew brand in the 1940s, some things remain the same. Mountain Dew is still made and bottled in Knoxville. The Pepsi plant at the Forks of the River Industrial Park manufactures 10 different types of Mountain Dew for plastic bottles and aluminum cans.

Police seize a car loaded with moonshine in 1957.

Pepsi makes a total of 28 Mountain Dew products. One gives a nod to the brand's Knoxville origins. The Dewshine beverage is clear like the Hartman's original formula and uses real sugar.

Simply put, nobody would be "doing the Dew" today if not for the drink's hillbilly heritage in East Tennessee, where secret stills thumped a potent mountain dew in the misty hills of Appalachia.