Days after ousting former Pastor Valentino McNeal, Mount Olive Baptist Church is welcoming a new interim pastor, and making sure the former does not come back. 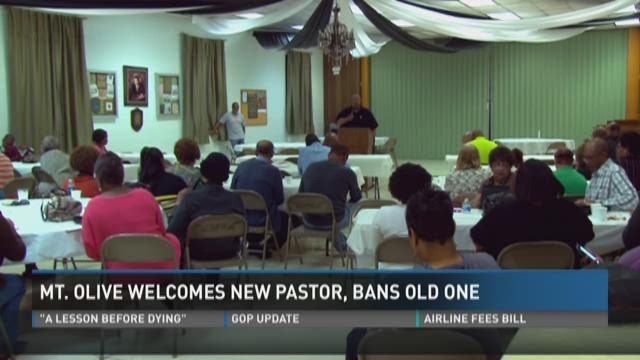 Days after ousting former Pastor Valentino McNeal, Mount Olive Baptist Church is welcoming a new interim pastor, and making sure the former does not come back.

The church filed a restraining order against McNeal Wednesday, and then introduced its new pastor, Jesse Williams, Sr., at a bible study Wednesday, where McNeal claimed he would still show up.

The former pastor did not attend, and Williams said the action is meant to "hasten the healing of the church."

"I'm not seeking any limelight," Williams said. "I want to stay in the background and try to lead the people to healing and reconciliation."

Williams grew up attending Mount Olive. He then went on to serve St. Mary's in Maryville for decades.

"I retired in December, and here we are again," Williams said. "We're looking forward to the challenges and doing things to lead these people."

Before Monday's ousting, the church went through months of turmoil, voting to remove McNeal from the church, and even taking its fight to the Knox County Chancery Court.

"We've got a lot of healing, a lot of hard work ahead of us to heal this church and to restore it to the prominence in the community that it historically deserves," longtime church member Theotis Robinson, Jr., said.

Both Robinson and Williams did not know if McNeal had been served the restraining order prior to the bible study, but there was talk the former pastor was leading his own bible study somewhere else.

"If he wants to go out and start his own church, I don't have a problem with that," Robinson said. "It's just that he cannot hijack this church and make it his own."

Williams said he plans to meet with McNeal in the near future, but off the church grounds.