NICU room to be named for Emma Walker 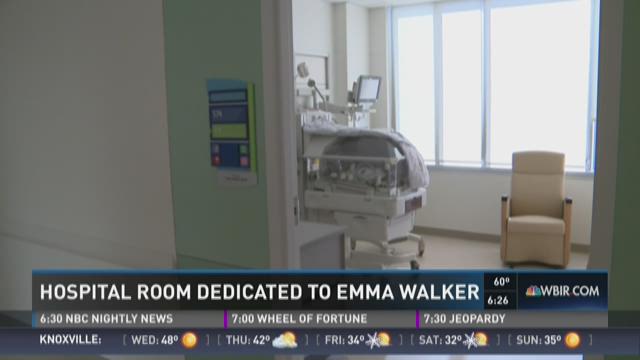 A patient room in the Neonatal Intensive Care Unit at East Tennessee Children's Hospital will be named for Knoxville teen Emma Walker, the hospital said Monday.

Walker's dream was to become a NICU nurse.

"She wanted to help. She wanted to be a nurse, she wanted to work with babies in the neonatal unit," her aunt Jenny Walker Weldon told 10News in November, "She had so much potential and so much purpose in her life."

As a way of memorializing Walker and honoring that dream, ETCH said one of the 44 private NICU rooms in its newly-opened Scripps Networks Towers will be named for Walker.

The 16-year-old was a junior at Central High School. She died on Nov. 21, 2016, when officials say her ex-boyfriend shot through a window in her home while she slept.

William Riley Gaul is charged with first-degree murder in Walker's death. His case is still before a grand jury.

Hospital spokesperson Erica Estep said Walker's family was looking for a way to honor Walker and do something in her name.

The hospital's development office set up a fundraising campaign to accept donations in honor of Walker.

Estep said the money donated to name rooms in the new building will go toward the cost of the new NICU or equipment for the wing.

"It was one of those moments you knew everything was meant to be. Everything had fallen into place," said NICU nursing manager Tracie Savage.

"There will be a plaque on the wall that says in memory of Emma Walker and as people will ask for years to come, 'Who’s Emma Walker?'  We’ll be able to share the story and what we’ve done for the family and what the community has done for them."