State lawmakers voted down a bid to remove a statue of Nathan Bedford Forrest from the State Capitol. The bust has been protested since it was installed in 1978. 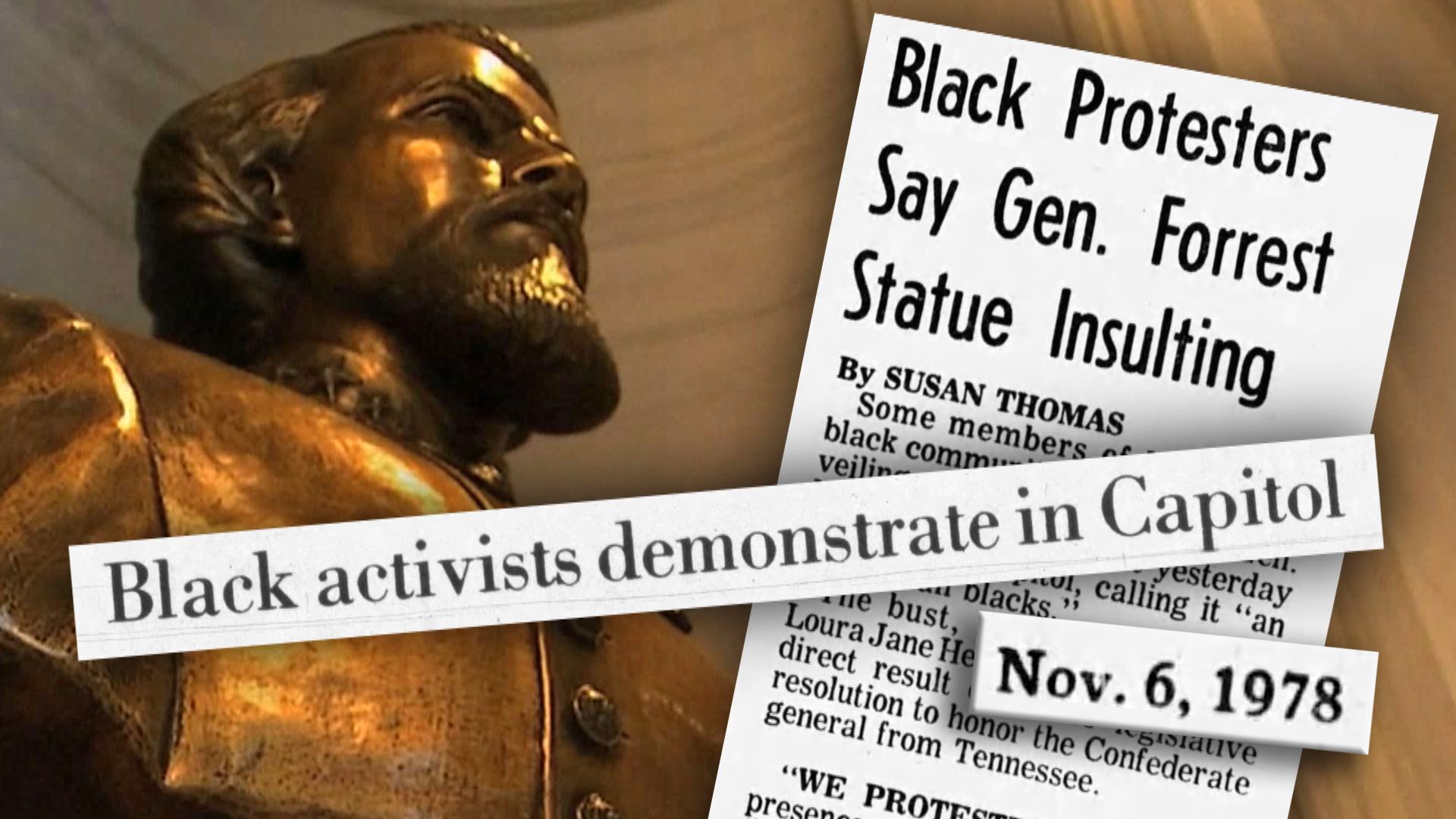 NASHVILLE, Tenn. — State lawmakers grappled Tuesday with a couple of controversies involving Nathan Bedford Forrest, a man born almost 199 years ago. One issue is the statue of the slave-trader, Confederate general during the Civil War, and early member of the Ku Klux Klan. The other is a state holiday in his honor.

Objections to the bust displayed in the capitol did not begin in recent years. The protests started when the statue was discussed and created in the 1970s. The bust was installed in 1978, meaning it's younger than Star Wars and Saturday Night Fever.

From the start, black members of the state legislature and the NAACP objected to the statue and called it an insult.  In 1979, meetings were held with new governor Lamar Alexander to ask for its removal. Alexander said it was up to the legislature.

As for why the statue was put up in the 1970s in the first place, a state lawmaker said the idea came from the existing bust of Admiral David Farragut.  Farragut, a Tennessee native, was a hero of the United States Navy during the Civil War. The lawmaker thought if a Civil War hero for the United States had a statue, so should the Confederacy.

The statue of Forrest was damaged in 1979 when it was hit with a ball-peen hammer.  A black member of the legislature commented it should not have been vandalized, it should have been pulled down completely.

In 1980, leaders of the Ku Klux Klan met beneath the bust while wearing their well-known robes and hoods. They said it was appropriate they meet beneath a statue of Forrest as they outlined plans to train SWAT teams for a coming race war.

Credit: WBIR
Nathan Bedford Forrest bust in the Tennessee capitol with superimposed 1980 newspaper clipping from The Tennessean of KKK members meeting beneath the statue.

After 42 years as a source of division, the bronze likeness continues to spark controversy in the state legislature.  Tuesday, a house committee voted down a bid by Rep. Rick Staples (D-Knoxville) that would have suggested the capitol commission remove the bust of Forrest and replace it with someone more deserving.  The rejecting vote was 11-5 with all nay votes from Republicans and the supporting votes from four Democrats and one Republican.

The other main issue Tuesday is the state holiday that was created in 1921 to honor what would have been Forrest's 100th birthday on July 13.  The law still exists, and the governor is required by law to sign a yearly proclamation declaring July 13 Nathan Bedford Forrest Day.

In 2019, Gov. Bill Lee said he did not want to sign the proclamation but was required to by law.

Committees in the House and Senate debated bills that would eliminate the holiday.  The House deferred without voting.

The committee in the Senate amended the bill so it would not get rid of the holiday that honors Forrest.  Instead, the bill was changed to say the governor is not required by law to sign proclamations for state days of observance, "be it Mother's Day or any other day." The amendment did not mention Nathan Bedford Forrest.

Some have defended Forrest's reputation by claiming he changed some of his opinions on race and slavery late in life.  Opponents note the statue is not of an elderly Forrest reflecting on the err of his ways.

The National Park Service cosponsored a historical marker in Memphis to note Forrest's involvement in the slave trade.

Forrest was known as a bold military tactician who wreaked havoc on United States forces. He was also known for his involvement in the massacre at Fort Pillow, an atrocity where around 300 black soldiers were killed after they surrendered.

Forrest's nickname as a skilled cavalryman was "the wizard of the saddle."  This moniker was used to name him the first "grand wizard" of the KKK in 1867.

RELATED: May 12, 2020 - Battle ends over statues and graves of Confederate General Nathan Bedford Forrest and his wife