President Obama's plans to fight the drug abuse epidemic impacts those suffering from opioid and heroin addiction back home in Tennessee. 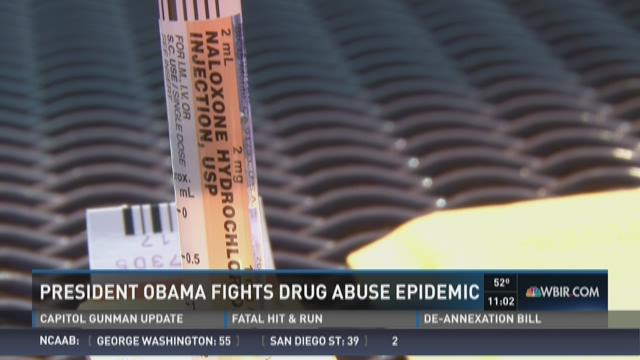 He joined in the National Prescription Drug Abuse and Heroin Summit in Atlanta, where he proposed funding $1.1 billion to treat those addicted to drugs, along with increasing access to life-saving drugs such as naloxone and buprenorphine.

"The most important thing we can do is to reduce demand for drugs," he said. "The only way that we reduce demand is if we're providing treatment and thinking about this as a public health problem."

Knoxville Police Chief David Rausch attended the summit this year and has gone the past four years. He said the summit is the primary location to find solutions for the drug abuse epidemic.

"It’s the reason we’re using naloxone in Knoxville," Rausch said. "It’s because of what I learned at this summit. A number of bills that were passed in our Legislature were based on information that we learned here that I shared with legislators and others.”

Rausch said the main message of the summit was Obama's effort to approach drug addiction as a mental illness, rather than a crime.

“This is a chronic disorder that we need to be addressing as any other public health issue," he said. “Just two weeks ago, we had four saves in five days. Since then, we’ve had two or three more saves, and we’ve had about three deaths as a result of heroin overdoses, so it’s clearly an issue in our community and clearly something we need to continue to work on.”

Betsy Tant lost her nephew, Henry Granju, to opioid overdose nearly six years ago, and she said it's about time that drug addiction is seen as a mental illness.

“For the longest time, so many people needed this help and people weren’t talking about it because there was a huge stigma," Tant said.

Since her nephew's death, she has been working for Henry's Fund, which raises money to help fund treatment for addicts, along with hosting training sessions to administer naloxone, the antidote to opioid overdose.

“The more people in our community who have naloxone and know how to use it, the more lives can be saved," Tant said. "What we do is because we don’t ever want another family to feel what we felt.”

Besides more access to treatment, she said it's even more important to help addicts fully recover.

“The most important part after that is that once a person has been physically stabilized, that we figure out how we can help them so that this doesn’t happen again," she said.

“If someone has died of an overdose, we have no chance of saving them and getting them into recovery and having them live a happy, healthy life, so everyone’s life is worth saving.”

The president's plan also includes access to a medical-assisted treatment to curb opioid addiction, as well as making treatment benefits available to those who are enrolled in Medicaid and the Children's Health Insurance Program.