A new hotel is now open in the building of the former Farragut Hotel, embracing the history of the classic scene. 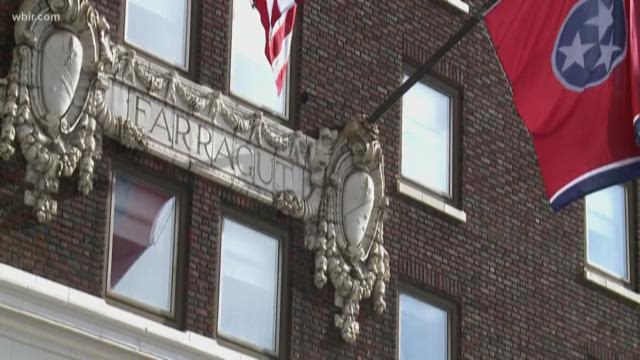 The Hyatt Place Knoxville will open this week on the 500 block of Gay Street. The same building once housed the famous Farragut Hotel.

On Tuesday, all those involved with the process of renovating this 100-year-old building met to cut the ribbon and mark the beginning of a new era for this corner of downtown.

"Thank you, thank you for coming today," said general manager of Dover Development Rick Dover. He leads the execution for Hyatt Place.

The building was constructed in the early 1900s as the Farragut Hotel.

"It's a historic preservation project for a 100-year-old building at the corner of Gay and Clinch downtown," Dover said, "so wow, what an honor to be able to do this project."

Named after Tennessee's very own Admiral David Glasgow Farragut, construction for the hotel was finished in 1919.

The hotel played host to a number of famous figures and events: The Knoxville Symphony Orchestra got its start in the ballroom in the 1920s; Lou Gehrig and the Big Bam, Babe Ruth, visited in the early 30s with the New York Yankees; and the Southeastern Conference, yes, the SEC, was founded in the halls of the Farragut Hotel.

Dover has some history of his own in the building.

"As a boy, I used to ride the bus down here and meet my dad. My dad worked at Sterchi Brothers down on the 100 block for 35 years," he said.

It was a barber shop that kept Dover coming back to the Farragut.

"There was a barbershop at the bottom of this building, so I would meet him there, I'd sit next to him as a little boy, get a haircut and a shoe shine and go to S&W for some lunch," Dover said.

With 165 guestrooms and all the modern amenities, Dover hopes the Hyatt can become a staple in Knoxville, just like the Farragut Hotel once was.

"Every city needs a signature hotel," Dover said. "Hopefully this will be the authentically Knoxville hotel it always was and something we can all feel like we want to be a part of."