Since Bernard Myers shared the story of a tree planted in Cades Cove after the attack on Pearl Harbor, the sweet gum has grown into a destination for tourists. 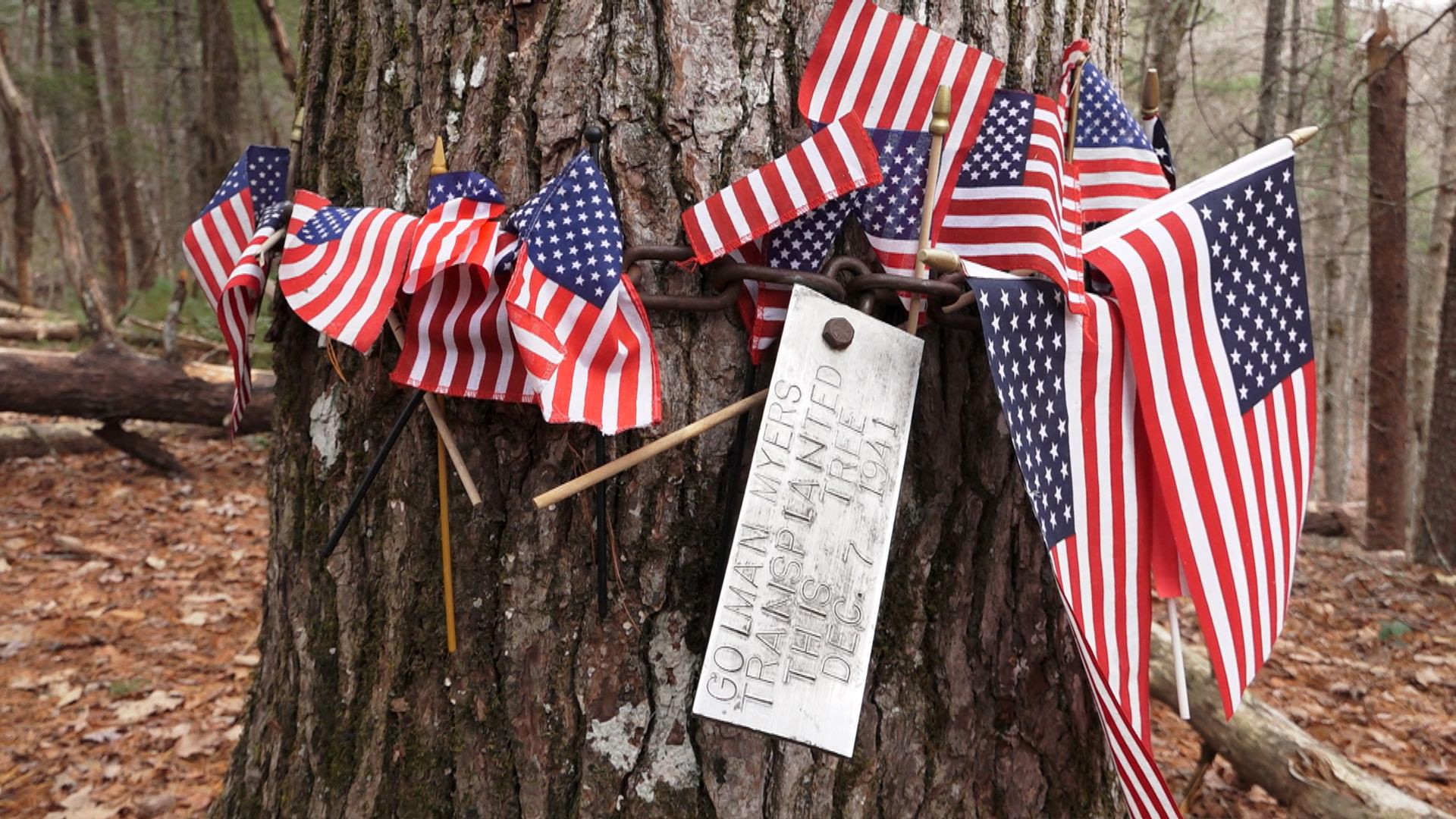 TOWNSEND, Tenn. — Sometimes the reaction to a story can become a story itself.

When Bernard Myers tells the story of the "Pearl Harbor tree" his father planted in their yard in Cades Cove immediately after learning of the attack in 1941, the tale now includes the public reaction after sharing his story with WBIR in 2015.

"The last few years, the response has been amazing. I have people call me all the time wanting to know how to get to the tree. Someone wrote a song about the tree. They go up to the tree and put American flags on it.  They've taken a fascination, I think, because they wouldn't expect a memorial tree to be in Cades Cove. It's not connected in any way with the oceans or ships or anything like that," said Myers.

Myers' roots are in Cades Cove. He's the last branch of a family tree that was born in the national park and farmed the valley.

Credit: WBIR
The hill where the home of Golman Myers once stood in Cades Cove in the Great Smoky Mountains.

"I still go back occasionally. It is good to remember where I lived. I was born on that hill in December 1936.  Dad built our house on the hill there in 1926.

In December 2015, Myers showed us the family heirloom that still stands tall where his house has long since disappeared.  The towering sweet gum tree was just a sapling when his father, Golman Myers, transplanted it to their front yard on Dec. 7, 1941.

"I put a marker on the tree so my grandchildren could find it.  The marker, it says 'Pearl Harbor' on that side. Dad kept up with the world news through a little battery powered radio. I was young at the time, but I knew it [the attack on Pearl Harbor] affected my daddy. I had two brothers who were draft age and he knew what was coming," said Myers.

The attack on Pearl Harbor killed 2,400 people and brought a world war to families in every corner of the nation.  When Golman Meyers marked the mournful moment, he planted a promise in his yard.

"He said, 'We will remember this forever.' He was a farmer and a patriot. He planted that tree knowing that it would grow," said Myers.

Golman Myers placed a tire rim around the tiny tree to make sure his boys did not run over it with a lawnmower.

As the national park took ownership of the Great Smoky Mountains, the Myers family sold their home and bought a new farm in Townsend.  Golman Myers still had some livestock in Cades Cove in early 1945 and was tending to the animals when he had a heart attack and died.

Credit: WBIR
Marker placed by Bernard Myers on the tree his father planted after the attack on Pearl Harbor in 1941.

The Myers family did its best to move on. But that little sweet gum tree kept growing. It eventually grew thick enough to split the tire rim that remains embedded in the base of the tree.

Today tourists hike to the Pearl Harbor tree and post photos on social media. The pictures include families, children, and World War II veterans posing with the memorial rooted in history.

"It has created a bond of sorts. People from everywhere go up there. I've been up there when some Japanese people were up there, actually. People of all races and nationalities go up there," said Myers.

The unified reaction of respect at the tree continues to keep Golman Myers' promise of remembrance.

"The country, we came through a rough time. And I hope that people do remember and do keep going up there and treating it with respect. People will remember it. We'll remember this forever," said Myers.

DIRECTIONS TO THE TREE

There are no marked trails to the "Pearl Harbor tree" and the National Park Service discourages off-trail hiking. Anyone venturing in search of the tree should do so at their own risk. The hill is steep, and the surface covered in leaves and pine straw can be slippery.

The closest parking area to reach the tree is the pull-off 3.6 miles from the entrance gate of Cades Cove Loop Road. The pull-off has around 20 parking spaces and is on a sharp bend .5 miles beyond the Cades Cove Missionary Baptist Church.

From the parking area, walk west for .1 miles and there will be a small clearing on the north side of the road. The point where the tree-line on the western edge of the field meets the road is the bottom of the hill you climb to reach the Pearl Harbor tree. A short walk uphill due west will put you in the vicinity of the sweet-gum tree. A chain is tied around the trunk of the tree about 7 feet above the ground. A large metal rusted rim surrounds part of the base of the tree trunk.

A rough approximate location of the tree can be seen using the following link to Google maps.