NC veterinarians are joining physicians to enforce the new STOP Act law, as they combat an increasing trend of people exploiting their pets to get opioids. 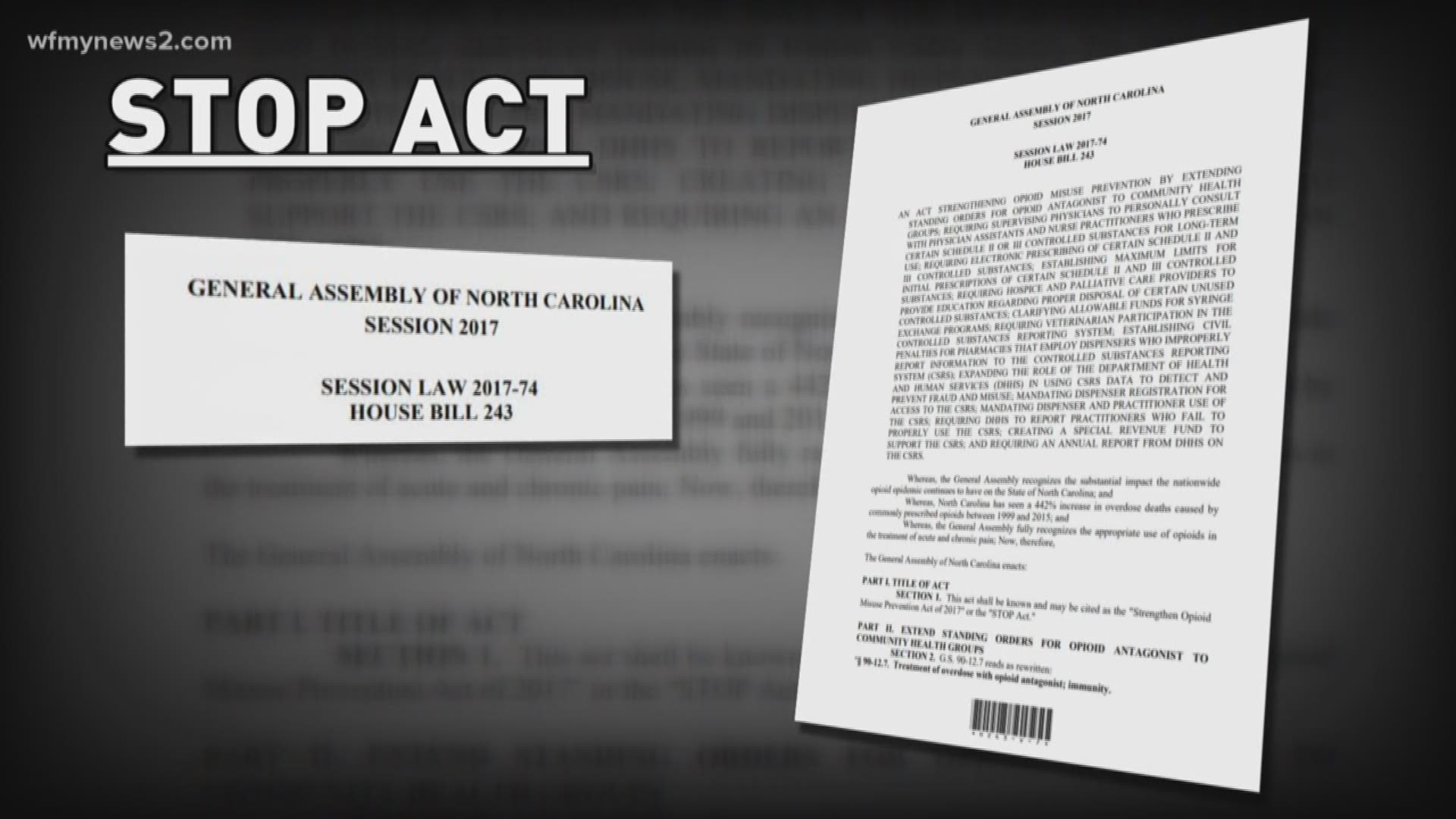 GREENSBORO, N.C. — Helping out paws; not handing out pills -- it is the philosophy Janine Oliver, DVM, owner and chief veterinarian of Benessere Animal Hospital in Greensboro. As North Carolina's opioid epidemic remains rampant, she finds her practice is saving not only animal lives but perhaps human lives, too.

WFMY News 2's Meghann Mollerus sat down with Oliver for a candid discussion.

"So when you were studying veterinary medicine, did you ever think you would be on the front lines of a human opioid epidemic?" Mollerus asked. "The only thing we were told is if you have a personal problem, there is a way to get help. We didn't talk about our effect on the human opioid problem," Oliver said.

Yet, in the last five years, she has noticed an uptick in red flags from pet owners.

"Sometimes, they'll come from another animal hospital. And, they'll say, my pet has anxiety, and the only drug that works for them is Drug X, and it's a controlled substance. Two, they (the patients) are running out of their prescriptions way faster than they should."

The trend is why, as of June 1, all North Carolina veterinarians became subject to the North Carolina STOP Act. It became law in 2017, regulating the frequency of controlled substance scripts and who gets them.

"There was never a limit on what we could prescribe before," Oliver said.

Nonetheless, she always has kept detailed logs. Now, under the new law, if she writes more than a three-day dose of opioids, she must note it on a new state data base that all veterinarians can access. It prevents so-called "shopping around."

"It prevents them from saying, 'Thank you very much for the prescription,' then going to my colleagues at Battleground (Ave.) or downtown (Greensboro), and then they've got three prescriptions for the same problem, you know?"

The problem is so concerning, Oliver keeps her supply of controlled substances under lock and key, with a double-locked safe that is bolted to the ground.

"If drugs go missing and the DEA comes and finds us, every mistake, every missing anything is a $50,000 fine," Oliver explained.

Her two security cameras caught a former kennel employee, suspected of breaking into the practice five times to try to get drugs.

"He loved the animals; I even went to his house to try to say, 'We want to help you,' and he just never responded," Oliver recalled.

"I never have to search for my pain pill patients, because they will come and see me when they need a refill," explained family medicine practitioner Zoe Stallings, MD of Primary Care at Pomona.

Physicians like Stallings were the first health professionals to use the STOP Act. In most cases, they no longer can prescribe more than five to seven days of an opioid or narcotic. Refills require another consult.

"We brought our patients back in and had them do a drug screen and pain contract. We would explain to the patient there's a new law that says we have to really track what you're taking," Stallings said.

So, is the STOP Act stopping the problem?

"It gives us a sense of accountability. It also allowed us to implement some technology," she said.

The STOP Act digitized all prescriptions and consolidated the drug reporting database, cutting down on fraud but not demand, because opioids are so addicting.

"It (an opioid) blocks the pain receptors, but it blocks them everywhere. You get that sense of euphoria and release, but it comes with a lot of side effects," Stallings explained.

Oliver has lost loved ones to the epidemic.

"I've had relatives that have been in crisis and fortunately, they have recovered. But, I also know a friend who didn't recover and died, and recovery is always a slippery slope," Oliver reflected.

But, the new law is a start...toward stopping the problem.

"Not just protecting our pets but other people's pets; protecting ourselves. It takes all of us putting a little effort into it and not just trying to Band-Aid it," Oliver emphasized.

The solution? Prescribing prevention, not pills, to cure the future.