A secluded tree in Cades Cove is rooted in history. Its planting marked the attack of Pearl Harbor and an impending war that changed the lives of people deep in the Great Smoky Mountains. 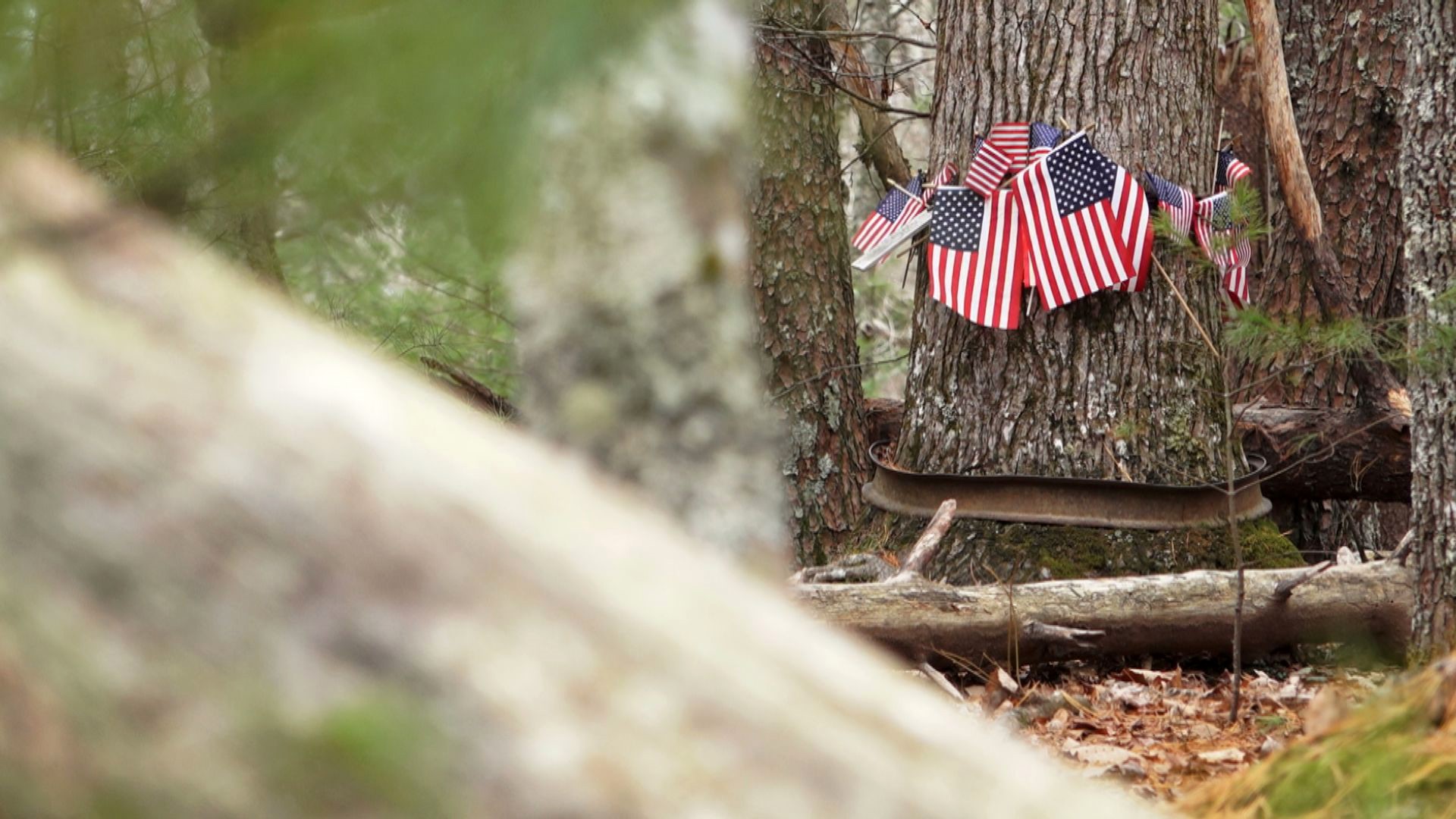 SEVIER COUNTY, Tenn. — Memorials for the attack of Pearl Harbor are scattered throughout the United States. Chances are you may have missed a secluded tribute planted on a hillside in the Great Smoky Mountains National Park.

"My daddy transplanted the tree the day of the Pearl Harbor attack. That hill the tree is on was our front yard back then," said Bernard Myers.

The Myers' roots are in Cades Cove. Bernard was born in Cades Cove in 1936 and is the last branch on a family tree that spent generations farming the isolated valley from 1870 until the mid-1940s.

The Myers family farm and house on the hill in Cades Cove in the 1930s.

"I had four brothers and a sister and we grew up here. I was the youngest. It doesn't look like it did when I was a kid," said Myers. "People look at Cades Cove now with only the really old log buildings from the pioneers still standing. They think we must have been a bunch of reclusive people cut off from the rest of the world. It wasn't that way at all. We had new homes, schools, grocery stores, and my daddy always kept up on world events with a battery-powered RCA radio."

Bernard's father, Golman Myers, grew crops and tended livestock on the family farm. In the 1940s, Myers began the process of relocating to a farm in Townsend as the National Park Service took over property in Cades Cove. Now the spot where the farmhouse stood on a cleared hill is grown over with dozens of pine trees.

"All that's left is a little bit of the chimney and there's a hole in the ground where the cellar was," said Myers.

Bernard Myers stands in a wooded area that was once his family's front yard in Cades Cove.

The house and farm are gone, but a family heirloom planted by Golman Myers still stands tall as a living memorial for the date President Roosevelt declared would "live in infamy."

"I remember my daddy hearing about the attack on Pearl Harbor on that little radio. I was really young, five-years-old, and did not really grasp the enormity of the situation. But I knew it affected my daddy. He kept up with current events, knew the war in Europe was bad, and knew with the Pearl Harbor attack that our country would be going to war. He had two sons, my older brothers, who were of draft age and he knew they would be involved in the war. This was going to affect his loved ones."

The attack on Pearl Harbor killed 2,403 people, brought war to the families of an isolated mountain oasis, and motivated Golman Myers to search the nearby woods for something to mark the mournful moment.

An old tire rim surrounds the base of a sweetgum tree that was a sapling on when Pearl Harbor was attacked.

"I remember him going and getting the tree back here on the mountain. It was just a little sapling. He pulled it up and the tree was about the size of a limb," said Myers. "He transplanted it to the front yard. He brought it here and placed an old rim from an automobile around it, I guess to keep us from running the lawnmower over it."

With the small sweet-gum tree transplanted and its perimeter protected by a metal wheel, Golman Myers made a single statement to sum up the significance of the sapling in his front yard.

"All he said was, 'We will remember this forever.' It was a somber situation really, because he knew what was coming," said Myers. "He was a patriot. He was a farmer. And I think that's why he chose to memorialize that event with a tree. He planted that tree knowing it would grow and be a reminder that people could look back on."

Golman Myers was proven correct. The tree would grow to great heights. He was also right about his two sons leaving the farm to fight overseas. Both of Bernard's older brothers managed to survive through World War 2. However, their father did not.

"In April of 1945, at the age of 51, he had a heart attack and died. We were already moved partially to Townsend and my daddy came back to Cades Cove to take care of the animals that were still here when he had a heart attack. My mother had just had a major surgery, two of her sons were overseas, her husband died, and I was just a little boy. It was hard times and sad times, but I would not say bad times because we were a close family and really stuck together and helped each other through it all."

After his father's death in 1945, Bernard Myers' family completely moved out of Cades Cove. In the decades that followed, the old family farm continued to grow into a tourist destination that ranks as one of the most popular and picturesque settings in the Great Smoky Mountains.

The wheel that once surrounded a sapling is now embedded in the bark of the Pearl Harbor tree.

All the while, the little sweet-gum tree on the hill kept growing. Today you only have to count one metal ring to see the tree's age.

"That old wheel rim is split and wrapped around the tree and grown right into the bark. It's amazing to see it. That tree has really grown. It's got to be 60 feet tall now. It makes you realize how much time has passed since that day when my daddy moved it from the woods. Not only because the tree is so much bigger, but it is surrounded by tall trees that were not here back then," said Myers.

In the mid-1970s, Bernard attached an engraved metal tag to the tree with a chain so his grandchildren could locate a link to their family's past.

Tag attached to the "Pearl Harbor tree" noting the date of the attack when the tree was transplanted.

"The metal plate says, 'Golman Myers transplanted this tree December 7, 1941' on one side and 'Pearl Harbor' on the other side. When I put the chain around the tree, I had no idea other people would find it and look at it. I was just doing it for my grandchildren. This isn't really near any of the trails and is in an overgrown area, so I was really surprised to learn so many other people found it. The corner of the tag is worn slick from so many people grabbing it to read it," said Myers.

As for why so many people have taken a special interest in the secluded tree, Myers says he has no clear answers.

"Somehow or another it struck a chord with people. I don't know if it is patriotism or because it seems so out of place. I think some people must think, 'In Cades Cove, there's a Pearl Harbor tree?' Who would have ever thunk it?" laughed Myers.

Many sweet-gum trees can live 150 years or more. For now, the tree lives on, rooted in history and the rich soil of Cades Cove. The living memorial also fulfills the promise Golman Myers made on December 7, 1941.

"So many people folks know about the tree know, I think people really will remember it and the attack on Pearl Harbor. We will remember this forever."

DIRECTIONS TO THE TREE

There are no marked trails to the "Pearl Harbor tree" and the National Park Service discourages off-trail hiking. Anyone venturing in search of the tree should do so at their own risk.

The closest parking area to reach the tree is the pull-off 3.6 miles from the entrance gate of Cades Cove Loop Road. The pull-off has around 20 parking spaces and is on a sharp bend .5 miles beyond the Cades Cove Missionary Baptist Church.

Bernard Myers at the "Pearl Harbor tree" in Cades Cove.

From the parking area, walk west for .1 miles and there will be a small clearing on the north side of the road. The point where the treeline on the western edge of the field meets the road is the bottom of the hill you climb to reach the Pearl Harbor tree. A short walk uphill due west will put you in the vicinity of the sweet-gum tree. A chain is tied around the trunk of the tree about 7 feet above the ground. A large metal rusted rim surrounds part of the base of the tree trunk.

A rough approximate location of the tree can be seen using the following link to Google maps.

Reporter's Note: The story was originally published in December 2015.