The company has been "transitioning services" away from the North Knoxville hospital formerly known at St. Mary's in recent months. 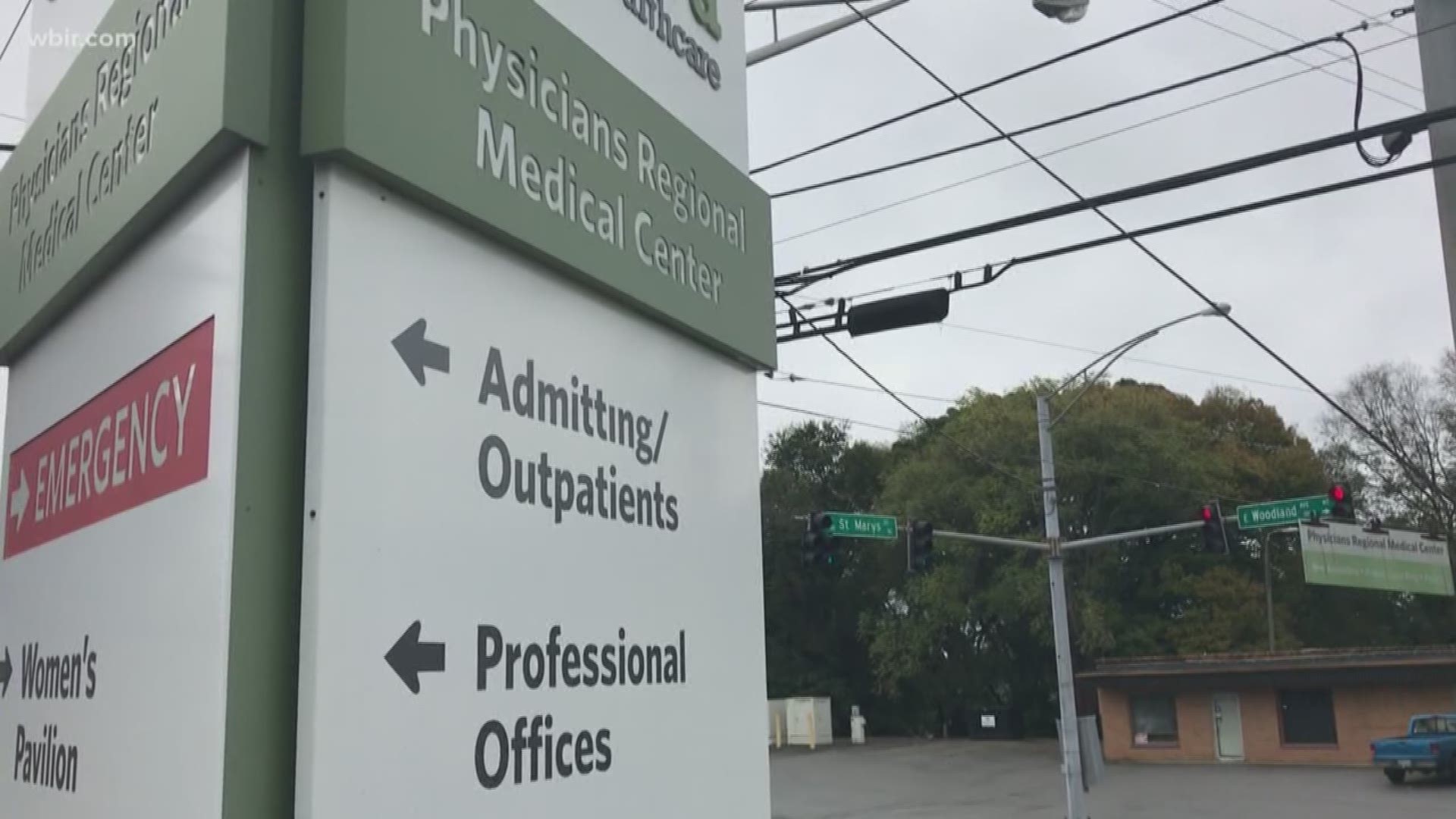 Two longtime East Tennessee hospitals are no longer accepting admissions and are making the final steps as they they prepare to close their doors Friday, according to Tennova Healthcare.

We've known for a while that the company was transitioning services from the Physicians Regional Medical Center (previously St. Mary's) in north Knoxville and had even been negotiating with the City of Knoxville to sell the building.

Now we know Physician's Regional, as well as Lakeway Regional Hospital in Morristown, stopped accepting admissions and current patients were discharged by 2:20 p.m. on Dec. 28.

"At Physicians Regional — approximately 2 percent of employees will be provided severance or early retirement packages. 110 employees will be placed on furlough with full benefits as they continue to build out services at our metro Knoxville locations," Tennova spokesperson Ann Metz said. "They have added 475 positions at other metro Knoxville locations."

At Lakeway, Metz said 38 employees have moved locations and 100 have been provided with severance packages.

“We have been working very closely with our medical staff, local EMS/first responders and other area providers to ensure a smooth transition of care for our patients,” said Tony Benton, chief executive officer for Tennova Healthcare in East Tennessee. “Strengthening our network and pursuing new outpatient strategies is critical to meet the needs and preferences of today’s healthcare consumers and support the way our physician partners prefer to practice. Delivering care in facilities designed to support current medical practices will best serve our patients and the community.”

In Knoxville, Tennova had been working to shift services to other hospitals.

At North Knoxville Medical Center in Powell, Tennova added cardiac catheterization laboratories and operating rooms to help accommodate cardiac care and orthopedic, general, vascular and other inpatient surgeries from Physicians Regional. They are also working on expanding surgery and childbirth services by next summer.

“Our teams across the region have done exceptional work caring for our patients, their families and each other while we have undergone construction, moved services and transitioned to different work sites," Benton said.

SIMILAR: Tennova to end some delivery services at Turkey Creek in April

Many employees at Physicians Regional have already transitioned to the other Knox County locations, and they are working with the remaining staff members to relocate them to another Tennova property.

“Every individual employee and physician at the hospitals is valued for their unique role in caring for patients,” said Benton. “It is through their commitment that thousands of patients have received compassionate, quality care over the years.”

"Inpatient services are less needed as medical advances allow more care to be provided in outpatient settings," according to the release.

Tennova said that it is also making improvements to the Tennova hospitals in Jefferson City, LaFollette, and Newport.

"Tennova is continuing in its work with local physician partners to pursue opportunities to develop new outpatient care sites, including the Middlebrook Pike property. The health system will announce those developments in the future as plans are finalized," according to the release.

The company has been “transitioning services” away from the North Knoxville hospital formerly known at St. Mary's in recent months.

The lawmakers said the company also said on a conference call Thursday morning that it will close the Lakeway Regional Hospital in Morristown.

The lawmakers said both hospitals will close by the end of the year and told 10News Tennova will expand services at Turkey Creek and other outpatient clinics to ensure continuity of care for patients.

The City of Knoxville was considering buying the site as a new headquarters for the police and fire departments as well as city court. Bill Lyons, City of Knoxville Chief Policy Officer, told 10News the city is still working through architectural and financial details of any potential arrangement.

“We are still at the due diligence stage,” Lyons said.

Joe Landsman, President and CEO, The University of Tennessee Medical Center issued the following statement on the change:

“Physicians Regional Medical Center and Lakeway Regional Hospital have been integral to the healthcare landscape in our region. The positive impact of these hospitals and their service to our region will be felt for years to come.

The University of Tennessee Medical Center is working with Tennova to make this transition as smooth as possible for the benefit of our community.”