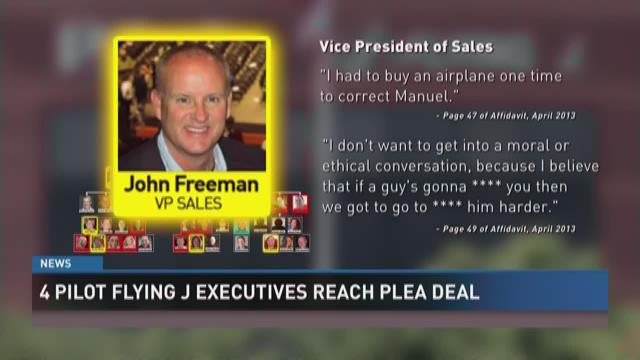 The defendants submitted plea agreements with the government in July.

They appeared early Thursday afternoon before Judge Curtis Collier, who is now handling the case after it was moved from Knoxville because of extensive publicity.

Four of the defendants have now signed plea agreements in the case, which were filed Monday in U.S. District Court for the Eastern District of Tennessee.

While they four have signed agreements, they have not yet appeared before a judge to formally plead guilty.

Documents show Freeman is admitting to conspiracy to commit mail fraud and wire fraud. He faces up to 20 years in prison and a $250,000 fine.

“We are saddened by news of the pleas of four people who worked for Pilot Flying J acknowledging that they participated in defrauding some of our diesel fuel customers. After learning of such improper activities more than four years ago, we made whole every customer negatively affected; entered into a Criminal Enforcement Agreement with the government, which included a $92 million penalty; continued to cooperate with the investigation; and made policy, procedure and staff changes to make certain nothing like this happens again.

“It is Pilot Flying J’s commitment to be a great partner to trucking companies across North America, always focusing our undivided attention on the best interests of our customers, team members and business.”

The trial for four more former employees is set to begin Oct. 31 in Chattanooga. The trial was moved out of Knoxville due to heavy pre-trial publicity, and is expected to take four to six weeks.

Pilot CEO Jimmy Haslam is not under indictment and has said he knew nothing about the alleged scheme.

Haslam answered questions during a day-long deposition in connection to a number of lawsuits filed against the company in December.

The former employees are accused of cheating some trucking customers out of fuel rebates.

Federal agents raided Pilot's Knoxville headquarters and several other nearby offices in April 2013.