The 2016 presidential election could go down as "the year of the write-in vote" in Tennessee.  The amount of people in Knox County casting write-in votes for president increased by more than seven times compared to 2012. 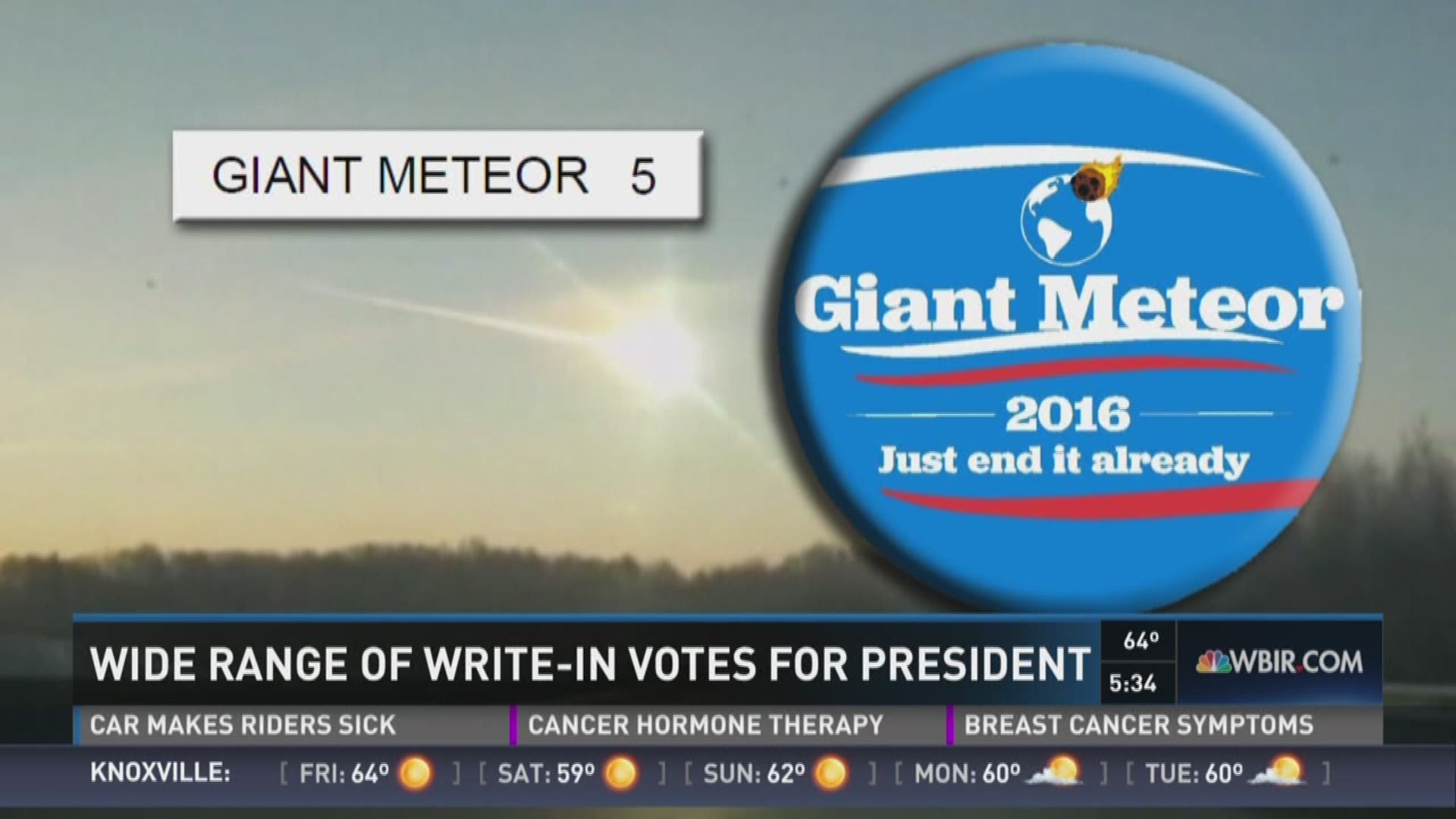 The 2016 presidential election could go down as "the year of the write-in vote" in Tennessee. The names submitted include the serious, bizarre, and silly.

In Knox County a total of 3,837 voters wrote in a name for president, more than seven times the amount submitted in the 2012 presidential election when 528 voters wrote-in a candidate.

Even Governor Bill Haslam was so dissatisfied with the major parties' presidential nominees, he wrote-in a candidate Tuesday rather than vote for fellow Republican Donald Trump. Haslam declined to say who he picked, but jokingly conceded “my person did not win.”

So, who did Haslam vote for?

Perhaps Haslam could have cast one of the five votes for "Giant Meteor."

Or did his vote go to Dolly Parton? She received three write-in votes, but we know she's not interested in the gig. Parton tweeted on election day, "I've been told a few times I should run for President, but I think there are enough boobs in the race already."

The governor himself was a popular write-in candidate in Knox County, with various spellings of his name garnering a total of 123 votes.

Those are just a handful of the 758 unique names Knox County voters took the time to write in as presidential candidates on Tuesday’s ballot, according to an 18-page list that local election officials provided to WBIR 10News.

The catch? Almost none of them counted. Write-in candidates must be certified prior to the election to be eligible for Tennessee's 11 electoral college votes.

Castle got about 120 votes; Hoefling got around a dozen; Kotlikoff neared 10; Limbaugh got three; and Fox, Schoenke and Kopitke received nada.

McMullin pulled in more than 1,300 votes, making the former CIA operations officer and independent candidate from Utah the big write-in vote winner. But he still lost.

Former professional wrestler Ric Flair received three votes from people who apparently wanted to "Make America Woo Again." If only Flair could have gotten one more vote, he would have had the figure-four.

As usual, there were many names just too lewd, crude, and rude for online news and television broadcast.

There were also names of television broadcasters. Some folks kindly wrote in votes for WBIR 10News reporter Mike Donila and anchor Russell Biven.

The write-in list goes on and on, ranging from historical figures, cartoon characters, to burnt toast.

The bottom line is thousands of people wanted a candidate other than Hillary Clinton or Donald Trump. Well, except for one voter who wrote in "Hillary and Trump."

The next local election – it’s a city primary contest only – isn’t until August 2017.

Expect the fun to continue then.