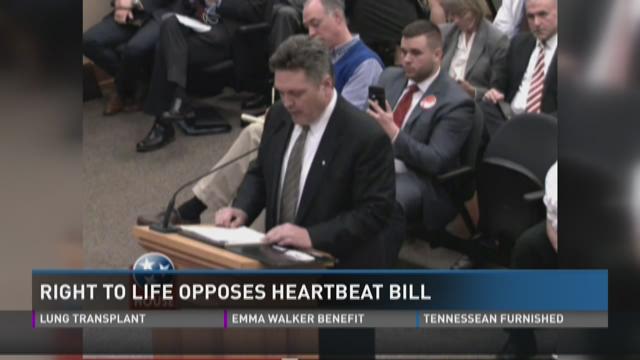 A group of Tennessee pro-life leaders said they will not stand behind a bill that would ban abortions after a fetal heartbeat can be detected.

A House subcommittee ultimately decided to delay any decision on HB108 Wednesday, after Tennessee Right to Life President Brian Harris called it "a step backward" for pro-life efforts in the state.

He said the ban is unconstitutional. The U.S. Supreme Court and several circuit courts have ruled that states cannot criminalize abortion before viability. Harris said viability is generally about 22 weeks from conception. A heartbeat is detectable anywhere from 6 to 8 weeks.

"Running legislation that is documented, is guaranteed to be found unconstitutional based on existing U.S. Supreme Court doctrine is not a good use of our resources,” Harris argued.

The bill's sponsor, Rep. Micah Van Huss, R-Jonesborough, said he believes a fetus is never not "viable" and believes that life begins at conception.

Harris said passing this bill is a danger to the work his group has already done and to existing laws in the state. He said it would be a money pit for taxpayers in Tennessee. The state of Texas recently spent $4.5 million on lawsuits filed against a similar bill.

The bill will be taken up against next week in the House Health subcommittee. It's scheduled for discussion on March 8. A Senate version of the bill, SB0244, filed by Sen. Mae Beavers, R-Mt. Juliet, will be discussed in the Senate Judiciary committee. A date for that discussion has not been set.