Protesters demand justice in death of Anthony Thompson Jr., call on leaders to work with community to end violence

Thompson was shot and killed during a confrontation with four Knoxville Police Department officers at Austin-East Magnet High School on April 12. 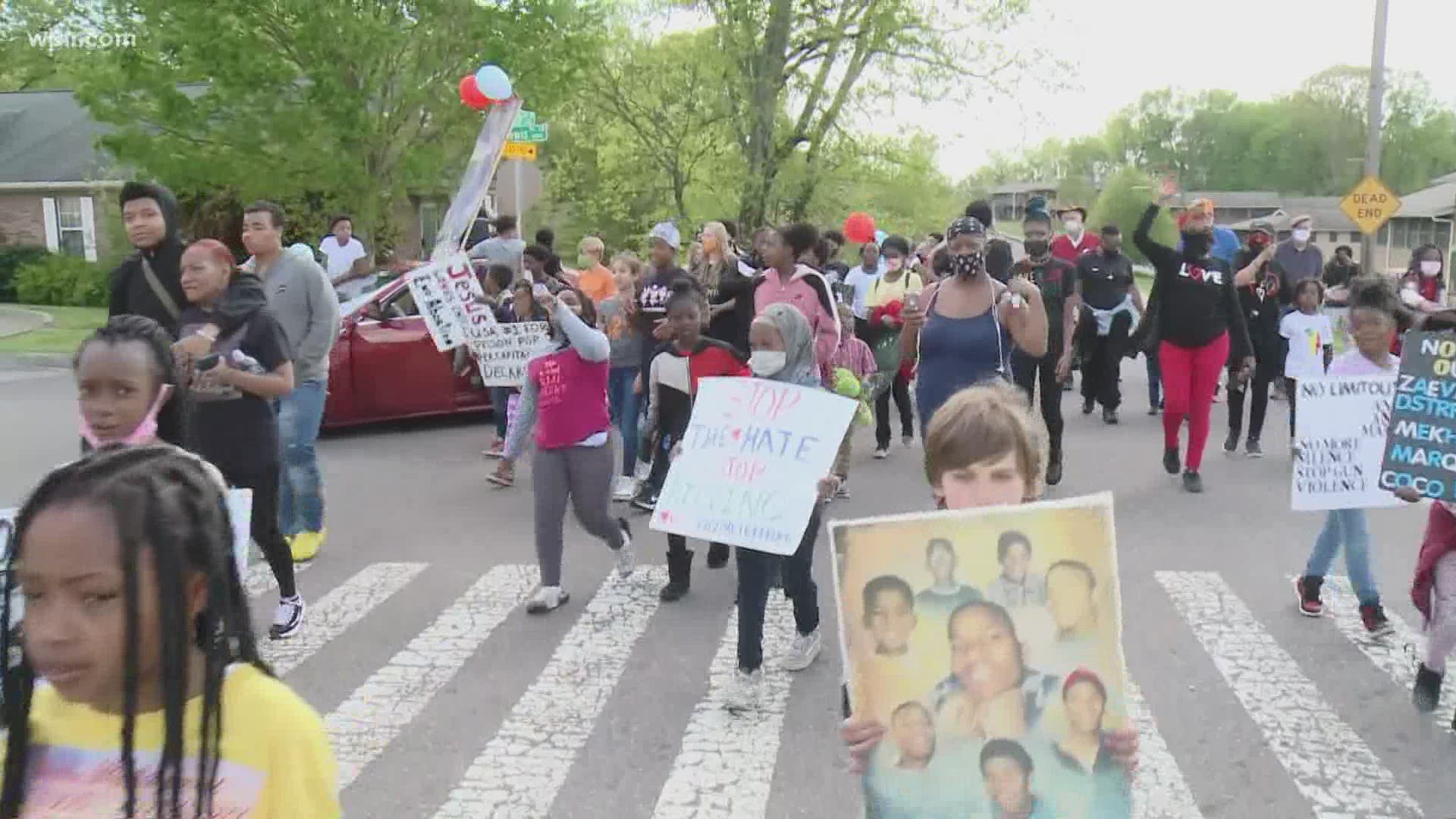 KNOXVILLE, Tenn. — People in Knox County are demanding justice in the death of Anthony Thompson Jr. and urging leaders to work with communities to fix violence and inequality.

Protesters gathered outside of what they believed to be District Attorney General Charme Allen’s home calling for justice in the death of 17-year-old Anthony Thompson Jr. on Sunday.

“In my community, we’re coming together for justice, peace and for the children like and generations,” said Kara Rhodes, a Knoxville mom of two.

Thompson was shot and killed during a confrontation with four Knoxville Police Department officers at Austin-East Magnet High School on April 12.

“I want the police to stop killing Black people,” said one child walking in the protest.

On Monday, people spoke in front of the Knox County Commission to demand answers -- calling for leaders to change policy and to invest in East Knoxville.

Officer presence at Monday's meeting was much higher than normal, with the visible presence of dozens of uniformed officers inside the meeting room and the City-County Building.

People who spoke demanded to know why they were being treated as a threat both during the protests and during Monday's meeting, saying there was no reason to respond to peaceful protests with "militarized police" and helicopters.

One person who spoke said the city and county need to stop putting the blame for the recent violence on the community, and instead should work together with them to address it.

"We’re trying to fight antiviolence in a community that has lacked investment all my life. These people are here because we’re tired, frustrated, and we’ve been ignored,” she said. 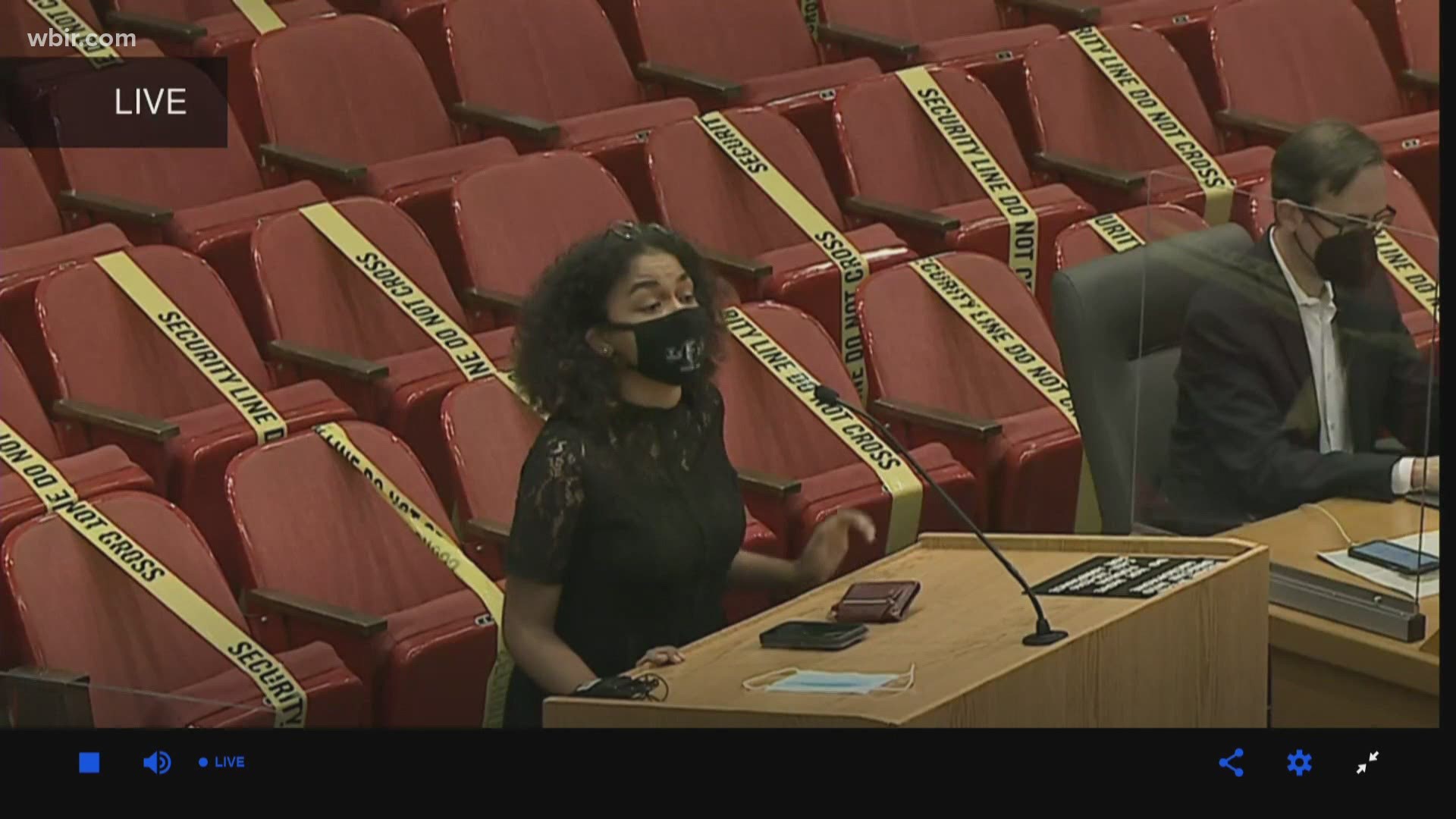 With the Tennessee Bureau of Investigation's investigation into the officer-involved shooting aspect of this case, and based on the bodycam video and other evidence, Allen said that Officer Jonathon Clabough was justified when he fired two shots in that bathroom and that he acted in his own self-defense and in the defense of the other officers.

“If you that aggressive as a job and your first priority, your number one job as a police officer is communication. If you can’t communicate, then you need to find another occupation. It doesn’t make sense. You’re here to protect and serve us, not hurt us,” said Rhodes.

The decision and body camera video were released on Wednesday, April 21, prompting protests as some disagreed with the DA's conclusion.

On Sunday, the group met in East Knoxville around noon and drove to the location.

A sheriff's office helicopter was seen flying over when the group left East Knoxville and began circling the home where the protestors gathered.

Protesters are gathering outside of the house believed to be District Attorney Charme Allen’s.

Neighbors said it was not Allen's house, but protesters did not leave. Police arrived on the scene.

Organizers began guiding protestors through the neighborhood, holding signs and voicing their message.

A heavier police presence arrived outside of the neighborhood where protestors were gathered as many of the demonstrators started to leave.

Near Downtown Knoxville, a protest led by a group of kids from East Knoxville called for an end to violence in the community.

“We can stop it if we come together and to just let them know that it only takes more than just talking about it it’s more in being about it and walking the walk,” said Ruby Herd, the mom of an Austin-East student.

HAPPENING NOW: Not far from downtown a protest led by the children of East Knoxville — PLEADING for the violence to stop...@wbir pic.twitter.com/kTRZSA1LsC

Herd said showing the youth the power of their voice and their message is a start in taking their community back.

“Just because things like this happen that you also can stand up and says something and move in love and move in peace and know that you are safe," Herd said.

As their march continues they believe their movement is moving in the right direction and serves as the first step to healing.

“I’ve never seen a lot of love like this, the community coming together and march in love and everybody just gathered so I feel like this is a big change and a big start," said Herd.