Protesters voiced their concerns outside of what is now being called Dolly Parton's Stampede on Saturday after removing the word "Dixie." 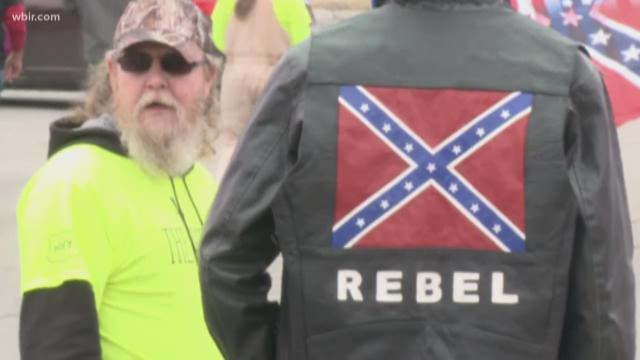 Protesters gathered outside of Dolly Parton's Stampede on Saturday after the term "Dixie" was dropped from the name of the dinner show.

More than a dozen people held confederate flags as they stood outside the dinner show in Pigeon Forge.

Many of those who came to the protests say the term "Dixie" refers to the South and its fight in the Civil War. One protester at Saturday's event said he believes the term is still part of the country's history.

"You can't mess with history," James Dell Brock, one protester outside the dinner show, said. "You can't rewrite history by taking the name out of it."

The show just reopened on January 19. More than a week ago, Dolly Parton released a statement about the change:

"Our shows currently are identified by where they are located. Some examples are Smoky Mountain Adventure or Dixie Stampede. We also recognize the attitudes change and feel that by streamlining the names of our shows, it will remove any confusion or concerns about our shows and will help our efforts to expand to new cities."

One communications expert, Mike Cohen, said in an interview more than a week ago that streamlining the brand is about selling tickets.

"Dolly Parton is an American icon. She's talented, she's smart, she's succeeded against the odds... She's the brand... I think if you Dolly's name in front of anything it totally eclipses what comes after Dolly Parton," Cohen said.

RELATED | What's the true meaning of Dixie? A Knoxville historian weighs in

"It caused us some issues because it created a mis-characterization as to what our show is about," Owens said in an interview with 10News on Jan. 10. "Dolly Parton's Stampede is about America. It's all about America."