The Knoxville Fire Department has confirmed a drowning at Fort Dickerson Quarry in South Knoxville. 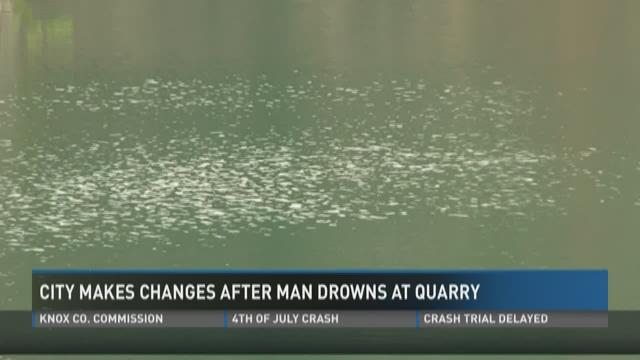 UPDATE 3:30 PM MONDAY: The man who drowned Sunday in Fort Dickerson Quarry in South Knoxville has been identified as a 27-year-old Knoxville man.

Dezayas Smith's body was removed early Monday from the quarry.

Witnesses have told police Smith jumped into the quarry Sunday night from a ledge and did not resurface.

The victim, who was located around 1 a.m., was a male in his late 20's according to the Knoxville Volunteer Emergency Rescue Squad.

Captain D.J. Corcoran of the Knoxville Fire Department said the man who drowned had not been at the quarry very long before he jumped from the rocks from a 65-foot ledge just before 8 p.m.

At around 8:30 p.m., Corcoran said Knox County Rescue stepped in to conduct the search.

The man's body was located around 1 a.m. Officials said there have been false alarms at the Quarry but this is the first drowning there this year.

In a news conference on Monday morning, Knox Co. Rescue Squad said one of its divers was injured during the search and rescue. The diver was taken to UT Medical Center.

Knox Co. Rescue said it's not rare for a diver to be injured during a mission.

Visitors at the Fort Dickerson Quarry are urged not to jump off the rocks. The city will be installing a barrier at some point and will be putting up more signs around the barrier and at the overlook.

The call came in shortly after 7:30 p.m Sunday evening.

The Knoxville Fire Department and Knoxville Police Department had crews on the scene. A water rescue squad was also at the quarry.

Captain D.J. Corcoran with the Knoxville Fire Department said the reported person jumped and never resurfaced. Corcoran said there have been false alarms in the past, so KFD was still trying to figure out the facts.

Corcoran said around 8:30 p.m. the crew would commit to two hours to try and rescue the person.

10News will update this story when more details are revealed.