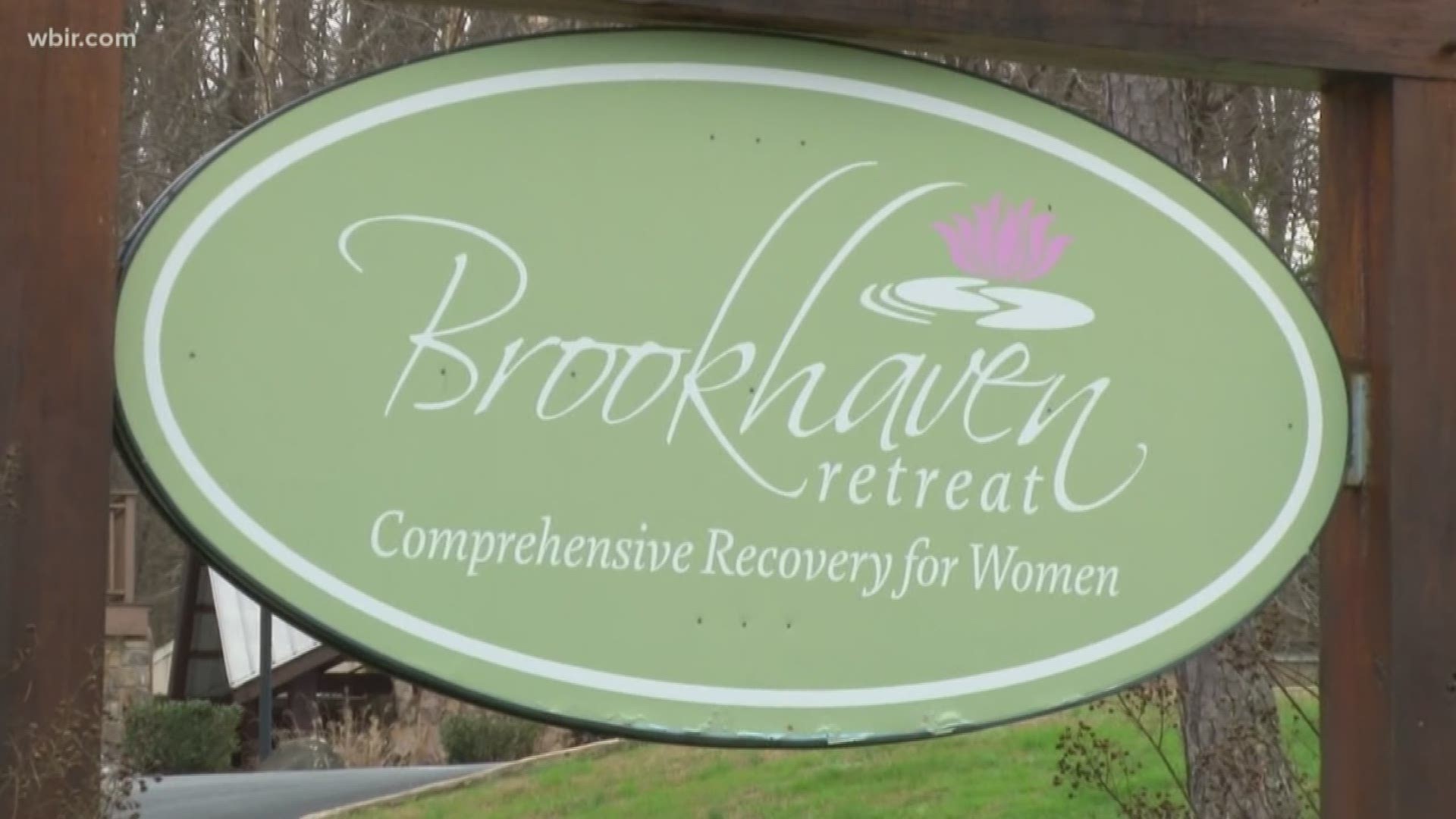 KNOXVILLE, Tennessee — An exclusive women's treatment center in Seymour faced a rising tide of legal and financial problems in the months before it abruptly closed last week, court records show.

Brookhaven Retreat, which charged $49,000 a month for its private residency program, had reneged on paying a 2017 $180,000 federal settlement with employees over unpaid wages and other labor issues. A lawyer had to sue in August 2018 to force payment in Knox County Chancery Court, records show.

In addition, documents show, Brookhaven became enmeshed in a court fight after declining to fully reimburse a Houston, Texas, couple who had paid for several months' treatment for their daughter. The woman's time at the I.C. King Road facility came to an abrupt end in December 2015 after she ran away barefoot in a rainstorm.

Credit: WBIR
Brookhaven operator Jacqueline Dawes sent out word Tuesday that the private Blount County treatment center would be closing at the end of the day.

A Knoxville attorney also has been trying since last summer to collect money owed to a Florida man who paid in advance for treatment of his daughter.

Brookhaven, founded in the mid 2000s, was licensed through the state to treat women for mental health and substance abuse problems. It often catered to a wealthy clientele.

It was founded by Jacqueline Dawes, a United Kingdom native whose daughter died in 1998 after an ecstasy overdose in their hometown in Scotland.

Dawes abruptly shut Brookhaven down March 5, directing employees to pack up and clear out. Employees, including nurses and housekeeping staff, have told 10News they are due several weeks' pay.

Clients also had to be sent back to their homes, hundreds of miles away, some while in the midst of residential treatment, according to staff. Some of those clients also had paid in advance through May, one client's mother told 10News.

Efforts to reach Dawes have been unsuccessful.

In 2016, a handful of employees sued Brookhaven and Dawes in U.S. District Court alleging they were being required to work 70 or more hours without being properly compensated.

"Dawes often represented that Brookhaven could not afford to pay employees their salaried wages, or pay other creditors..." Nelson's complaint states.

An affidavit filed by Ana Garcia Smith, twice a Dawes employee, states the staff at times would quickly have to deposit client payments in order to satisfy banks that were threatening to close accounts. Smith said she also fielded calls from utility providers about unpaid bills for Brookhaven.

Dawes, meanwhile, continued to put Brookhaven money into her own account, the lawsuit states.

"Furthermore, the viability of Brookhaven is threatened by Dawes' removal of business funds into her personal account and substantial withdraws of Brookhaven's funds," according to the suit.

Nelson feared Dawes would flee "or misappropriate funds" to skip payment. He eventually got his clients' money.

In April 2018, David and Kristi Lumpkins of Houston, Texas, sued in Blount County to recover $98,000, part of $147,000 they'd paid up front as part of their daughter's care in 2015. Their daughter spent some 21 days at Brookhaven, along with a trip to a Nashville hospital.

According to the Lumpkinses, Dawes had assured them Brookhaven could treat their daughter, who had a history of declining to take her medicine and was considered a flight risk.

She also assured them they'd get their money back for any unused time at Brookhaven, they allege.

The daughter spent two more days at Brookhaven in late 2015 after being released from the Nashville hospital. But, according to the Lumpkinses, Dawes refused to give them what they were due for unused time at Brookhaven.

Credit: Twitter
The Lumpkins' daughter fled Brookhaven in December 2015 soon after returning there from a Nashville hospital.

In practice, according to records and former employees, Brookhaven personnel strongly recommended clients stay three months rather than just one. Sometimes a client stayed even longer.

Brookhaven Retreat had formerly but did not at the time of its closure accept insurance.

Former clients and family members have praised much of the actual treatment and care offered but have objected to the way Dawes ran the center. They allege she used heavy-handed tactics to recruit people and then get them to stay.

To the Lumpkinses, the evidence shows "that Ms. Dawes is operating Brookhaven as a sham designed to perpetuate fraud against unsuspecting customers, all in an attempt to fund her personal endeavors."

They also offered testimony from employee and accountant Heather Martin, who said she'd seen Dawes take $493,000 in a direct transfer for herself from Brookhaven's operating accounts.

Dawes owns a home and about 17 acres off Gov. John Sevier Highway in South Knox County. She offered it for sale last year at more than $5 million, then took it off the market.

It's back for sale now at an asking price of $8.4 million. The estate is called Bellamont.

Attorney Charmaine Nichols sued Brookhaven in 2016 on behalf of a Florida man whose daughter left the treatment program before her full time was up. He wanted a month's worth of his deposit back, according to records.

Dawes and Brookhaven resisted but Nichols won a judgment last summer in court, records show. Nichols said she's been trying to recover the money for her client ever since, including filing garnishments on accounts.

So far she has not gotten her client's money back, she said.