On a day of remembrance for the victims of the terror attacks on September 11, 2001, we also remember an East Tennessee man who led the cleanup of the fallen World Trade Center towers. 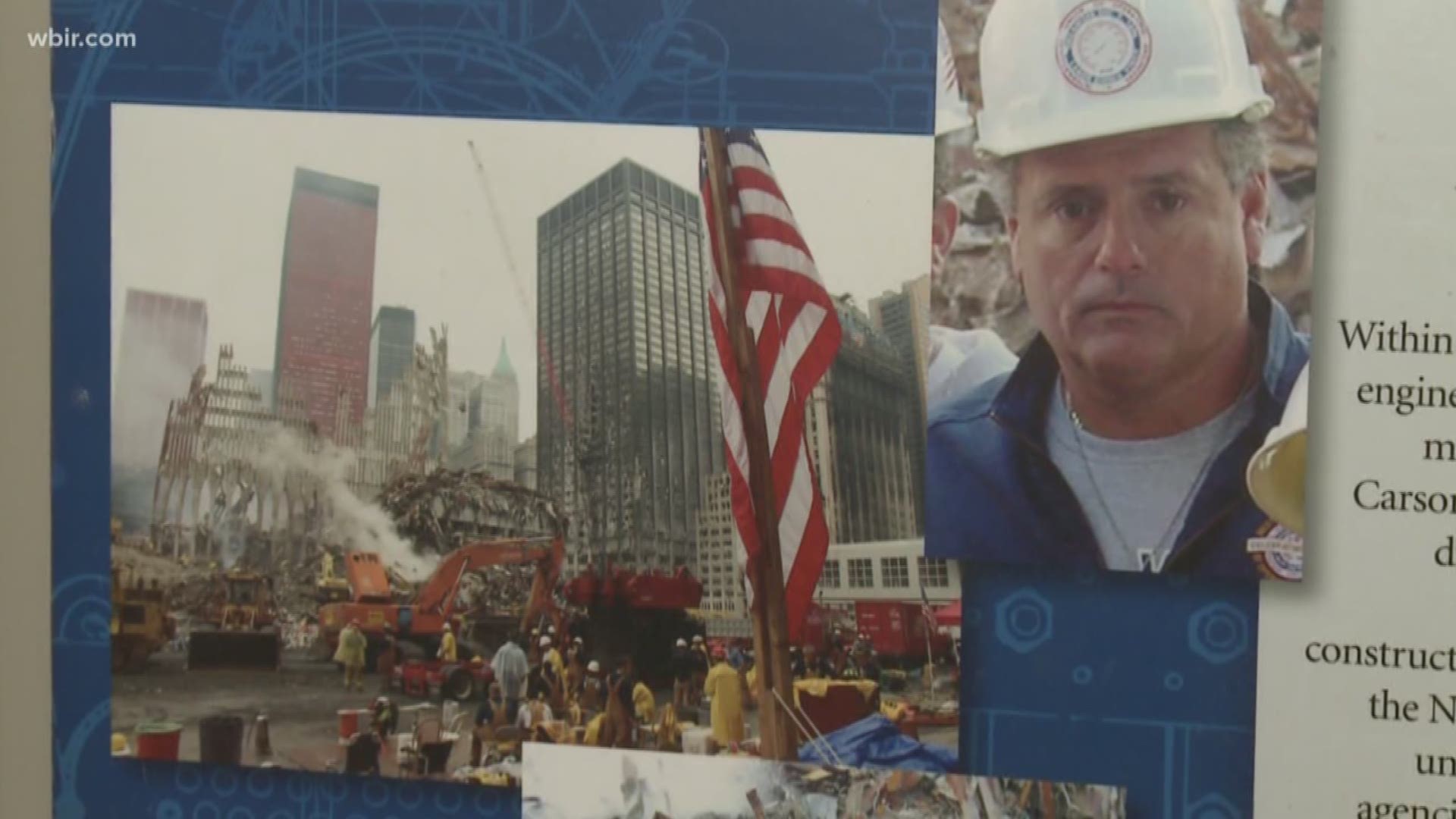 Knoxville — People across East Tennessee held remembrance ceremonies, rang bells, and placed wreaths in honor of the thousands of victims of the September 11, 2001, terror attacks. After 17 years, the term "never forget" should also apply to the lives of people who put themselves in harm's way to help the nation heal.

Don Carson is one of those men who gave much of himself to help New York City and the United States recover from the attacks on the World Trade Center. Carson was born in Oak Ridge, retired in Knoxville, and died in January 2016 at the age of 60.

In 2001, Carson led a union team of hazmat and heavy equipment operators who cleared millions of tons of rubble and debris from ground zero in Manhattan. On multiple occasions before his death, Carson opened his photo albums, shared rare photographs, and offered his unique experience with WBIR 10News.

Don Carson in 2013 with the flag given to him by New York City mayor Michael Bloomberg upon completion of 9/11 recovery operations at the World Trade Center.

"We were one of the first crews from out-of-state to help at ground zero. When we got there on September 14, it was a total shock when I saw it for the first time," said Carson in a 2013 interview. "For city blocks around, it was nothing but paper on the ground that came out of the towers."

Carson and others worked in a toxic cloud of dust and twisted steel around the clock.

"I could not name all the airborne contaminants that were in the air," said Carson. "That was a very dangerous job to move that much steel with heavy equipment. That job never stopped. It went 24-7 for almost nine months."

Photo from Don Carson's personal album of the cleanup of the fallen towers of the World Trade Center.

Every hour of every day, crews peeled away the wreckage and body parts. Workers had to deal with the trauma of months of daily encounters with human remains while performing a hazardous job. Every arrival and departure was met with grieving families in search of missing relatives.

"The worst part was seeing the families and children of people," said Carson. "I remember a lady who had a young son. He was wearing a badge around his neck with his father's picture on it. She handed him to me and he hugged me. And I remember that. It's hard to talk about and hard not to get emotional. The post-traumatic stress is for real. When your adrenaline is going 24-7 for a year, it's very hard to decompress."

Along with the rigors of the job came recognition. Carson's hard work and sense of duty earned honors and respect from world leaders.

Don Carson shakes hands with President George Bush in 2001. Carson led some of the cleanup efforts at the 9/11 WTC site.

"I got to meet a lot of people I would have never met. I got to meet President Bush. The day we finished operations, Mayor Bloomberg game me a United States flag. This flag means a lot to me and it is a symbol of what can be done and what the country did to draw together," said Carson.

Many people involved in the work at ground zero sacrificed their physical and mental health for the benefit of the nation. We remember their service and sacrifice. We also remember the leadership of Don Carson and his willingness to share a difficult and unique experience to give everyone a better understanding of history.

"When we brought the last beam out, there was a sense of accomplishment and a sense of pride among the workers. We finished it. It was a very emotional time for us getting through that job. But I was proud to be there and I'd go back again," said Carson.

Don Carson, right, leads the team of hazmat and excavation crews at the World Trade Center site after the September 11, 2001, terrorist attacks.