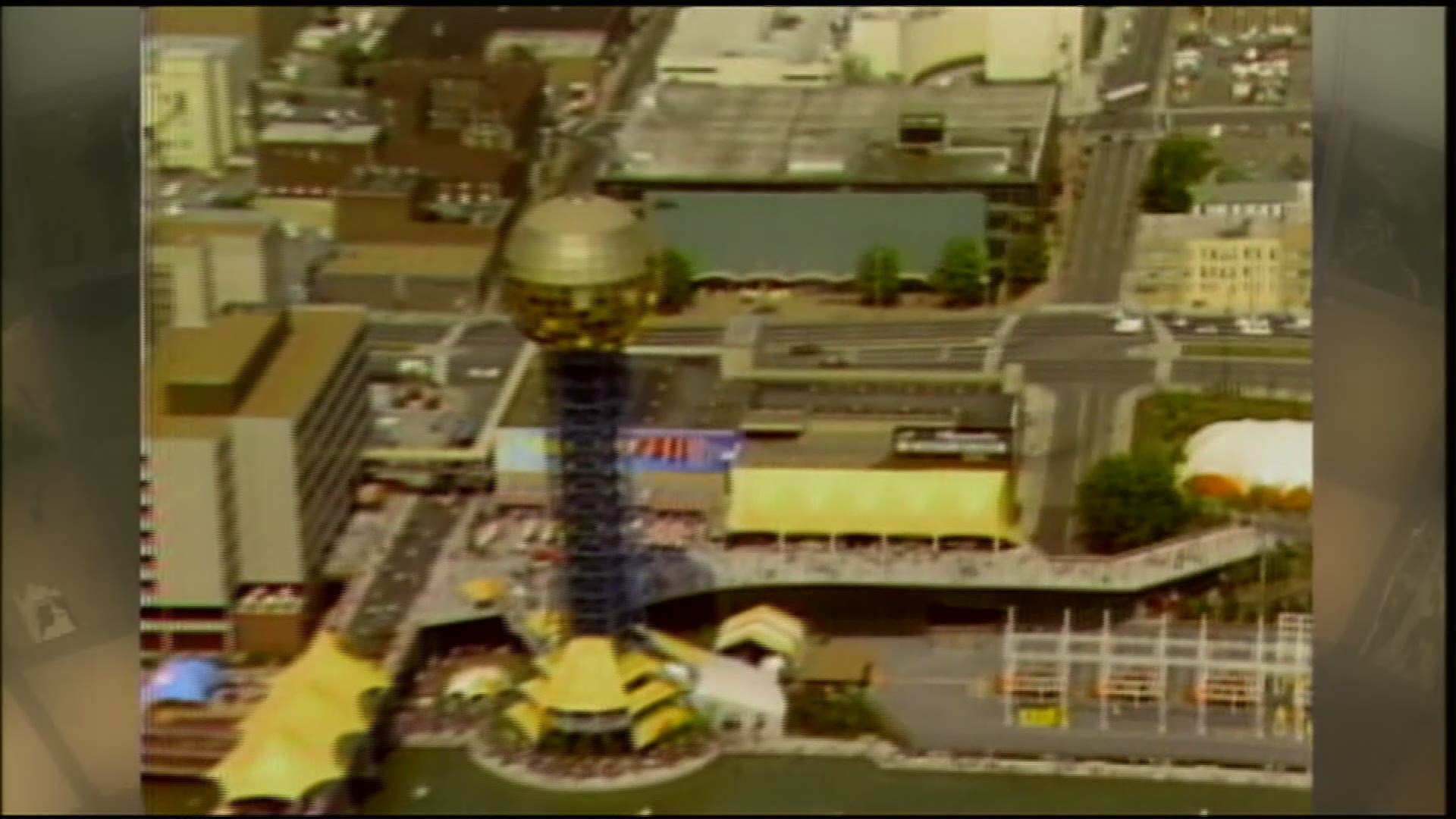 Knoxville — It was 1982. Ronald Reagan was president. A postage stamp cost just twenty cents. E.T. was the number one movie at theaters. It was also the year that the world came to Knoxville.

It's hard to believe it's been more than three decades since the scruffy little city pulled it off, despite all the naysayers.

Knoxville's World's Fair was a big success. President Ronald Reagan and the First Lady, Nancy Reagan, were here, on May 1, 1982, to officially open the fair. Actress Dinah Shore was the mistress of ceremonies, introducing the President and the other entertainers here for Knoxville's big day.

The World's Fair sprawled across part of downtown and the UT campus, over 72 acres of what used to be an old rail yard.

There was the Sunsphere, the centerpiece of the fair, that still soars over Knoxville today. Back then, it held three restaurants and two observation decks.

The Chinese Pavilion drew the largest crowds. It housed exhibits of Chinese culture and art, even pieces of the Great Wall of China.

The Australian Pavilion was memorable for its giant windmills. The Egyptians brought their cultural treasures like bronze sculptures and hieroglyphic tablets. The Hungarian exhibit was highlighted by a giant Rubik's cube, which was created by a Hungarian man. In the Japanese Pavilion, robots took center stage, even one that could write your name! The Koreans brought traditional dancers and cuisine, and built a water wheel and pagoda over their entrance.

Peru made a big splash, by actually unwrapping an ancient mummy, right on the stage of the Tennessee Amphitheatre. The mummy of a small child was then displayed in their Pavilion.

There were also restaurants and music venues featuring tastes and talents from around the globe. The popular Petro's restaurant got it's start at the fair, as Petroleum Bellies. The chili and toppings were actually added to a Frito's bag, slit down the side.

Living up to its theme of "Energy Turns the World," some cutting edge technology made its debut at the World's Fair. From some of the first green homes to an alternative fuel vehicle, ideas that are still very relevant today were on display. Texaco showed off a brand new convenience they called "pay at the pump."

"I think its the thing of the future. It's very interesting to operate," said one fair visitor in 1982. Turns out, he was right!

And this was pretty amazing-- you could actually make a telephone call from a car! Fair visitors were selected to try the technology out.

"Hello David. This is Mike.. you ain't never going to believe where I am!" one visitor said to a friend over that car phone, much to the delight of the crowd that was gathered around.

Fair visitors were also thrilled they could get their pictures developed in just one hour, at the Kodak booth.

There were lots of magical moments to capture on film from top entertainers who wowed the crowds to the nightly parades, complete with the electric train and its unforgettable theme song, and the fireworks that ended each day.

Fun for all ages

There really was something for everyone at the World's Fair.

Ask most people who were adults at the time where their favorite place was, and they'll probably say the Strohaus. It was an authentic German biergarten, complete with German food, beer, and chicken dancing, in the building that's now the Foundry. It drew a big crowd every night.

For the kids, of all ages, it was Funland, located right on the waterfront and in the shadow of Neyland Stadium. It was full of amusement rides, including a giant Ferris wheel that was the largest one in the western hemisphere, at 150 feet high. It was just one of the thrilling rides enjoyed by the fair's 11 million visitors.

Where was it, exactly?

For 184 days in 1982, Knoxville was the place to be-- a world-wide attraction, a good time that's really something to be proud of. That's probably really hard to imagine for those of you who weren't around then. Where did they put it all?

The World's Fair Park today is a 10 acre urban oasis, with sprawling lawns and water features, a playground, the Veterans Memorial, and not one, but two convention centers. It's all in the shadow of the Sunsphere, the most visible reminder of that amazing time in 1982.

"The iconic fixture of Knoxville and the World's Fair. They decided early on that every World's Fair has got some iconic structure, the Space Needle in Seattle, Eiffel Tower, so the Sunsphere is what they came up with," said John Craig.

Craig, who has served with the Market Square District Association, is one of the leaders in downtown Knoxville development. In 1982, he worked in crowd control at the fair, and he remembers it very well. He and 10News anchor emeritus Bill Williams walked the World's Fair site in 2012, trying to remember what it was like.

"John, for those not here at the time, not born yet, it's hard for them to understand the excitement, all the activity that was going on, back 30 years ago," said Bill as they walked beneath the Sunsphere.

The World's Fair covered 72 acres, from just north of Western Avenue, where the L&N and Foundry are now. It stretched from 11th Street to Henley Street all the way to Cumberland Avenue, then wound its way between the UT campus and the railroad tracks, to the river and Neyland Stadium.

What's left and what was lost

There's not much left these days. The Sunsphere, of course. Back in the day, it was home to three restaurants and two observation decks.

"The Hardees that was in the base of the Sunsphere during the 6 month period was the busiest fast food outlet in the world," remembered John.

"This is where the big shows were, we had some big names," said John.

And there was one really memorable night.

"We had the unwrapping of the mummy, the Peruvian mummy they brought in," said John.

"Yes, Dr. Bass was involved in that," said Bill, speaking of UT's revered forensic anthropologist and author, who is famous for creating the Body Farm.

"He was. I remember it was a really hot summer night they were up there, unwrapping and unwrapping. Turned out to be the mummy of a small child," said John.

The Knoxville Convention and Exhibition Center was the Technology and Lifestyle Center back then. That's where many corporations set up exhibits showcasing their latest innovations, like Ford's alternative fuel car or Texaco's credit card gasoline pump. You could also see sports memorabilia, and maybe meet some athletes, at the Gatorade Sports Hall of Fame.

There was also "The Biggest Little Show on Earth," an amazing circus in miniature. Most everything from those days is gone now.

"Yes, this was the lake that extended from down by the Amphitheatre up to the north end of the fair site. Just on the other side was the Court of Flags," said John.

That's where the flags of 22 nations, and several states, flew over the fair. It was the site of the opening ceremonies and a real "hot spot" for entertainment.

"During the fair, the Court of Flags was where the high school band got to perform, cloggers would be out here clogging away. It was the centerpiece. Also brutally hot," remembered John.

The U.S. Pavilion made it to 1991. It was the largest and most impressive of the pavilions.

"The pavilion was right here in this area, right?" asked Bill, pointing between and to the south of the Sunsphere and the Tennessee Amphitheatre.

"Yes, the U.S. Pavilion ran across from basically the railroad tracks up to east Cumberland here. It had an IMAX Theater, the largest in the country, maybe the world at the time, all of the exhibits. It was a huge typewriter shaped building that ran right down to the edge of the water," said John. After sitting empty for years, the city finally took it down. A new use for it could never be agreed upon after the fair, and eventually, the land was worth more than the building itself.

Most of the other buildings from the fair were never meant to be permanent. They were temporary structures that were dismantled and sold for other uses. That included all those international pavilions.

"There were many pavilions over here on what was the west side of the World's Fair Park," said Bill.

"Exactly," answered John, indicating the area that borders 11th Street. "The international pavilions ran the length of the fair, over here you had the Saudi Arabian. Next to that Korean. Up the hill, you had the Candy Factory, with its restaurants and nightclubs."

The Candy Factory building is another one that's survived the three decades since the fair. It was next to the Japanese Pavilion. But before the Knoxville Museum of Art was built next to it, there was the Elm Tree Theater, one of the favorite entertainment venues of the fair. Bill remembers it as a "very popular venue."

"Exactly. It was shady, which was always a premium on World's Fair site, but also great entertainment," said John. The Elm Tree Theater was built around a huge old elm tree, that survived a few years after the fair. It was later struck by lighting and had to be cut down. Behind the Elm Tree Theater was the Hungarian Pavilion.

"The Hungarian Pavilion was memorable for the giant Rubik's Cube out front," said John. "Then to the north end of the fair site you had the Strohaus, where many a Chicken Dance was danced on the tables," said John.

"Great parties every night, people from all over the country would be here, and that was the place you could go and relax," remembered Bill.

Bill "heard there was some beer consumed up there" which John agreed was what "resulted in the Chicken Dance afterward."

The new Knoxville Convention Center now sits where more exhibit buildings and kiosks once were, along with a big parking garage.

"You may remember Miller's Department Store across the street. This was Miller's parking garage. During the fair and construction of the fair, this was the unofficial observation deck. People would show up every Sunday to hang off the railing and watch what was going on," said John.

There was more to see to the south, towards the UT campus and Tennessee River.

"Beyond the U.S. Pavilion, you crossed the railroad bridge (over Cumberland), you had the Australian Pavilion, they had windmills on the hillside and the Down Under pub. After that was Canadian pavilion, then the Fed Ex Pavilion. The longest lines of the fair were at the Chinese Pavilion. Egypt and Peru shared the same space, which is now a UT parking lot up off Neyland Drive. Beyond that was Funland, which stretched along Neyland Drive past Neyland Stadium, roughly where the G-10 parking garage is now.

For six months, the crowds streamed in. Locals would visit often, buying passes that allowed them to stop in for lunch or after work. Visitors came from all over.

"For a little town like this to be able to have that, to get that recognition, have those events going on, really was a coming of age for us. It created a lot of excitement, people are very proud of those days and what we were able to pull off," said Craig. "At the end, we had the huge closing ceremony. Those who worked the fair ended up in the Waters of the World Lake to celebrate. It was sad when it ended, but it was great to have that time in Knoxville. It created so many memories for those of us who got to participate."