A report from federal surveyors says a nearby quarry is causing sinkholes by a Sevierville bridge, but the company that owns the quarry says the study is flawed. 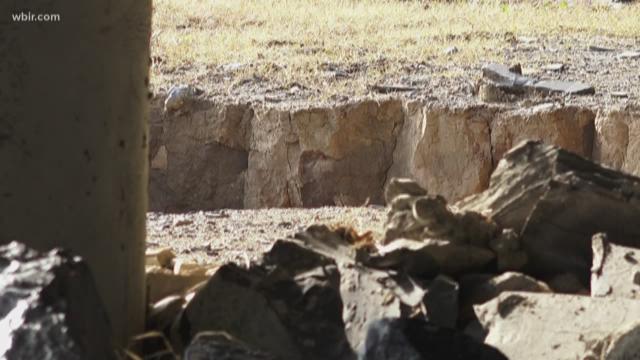 A new federal report has found the cause of chronic sinkholes near a Sevierville bridge, but others believe the report is incomplete.

At issue is the bridge where Collier Drive crosses Middle Creek, near Veterans Parkway.

According to the city of Sevierville’s proposal for an assessment by the U.S. Geological Survey (USGS), sinkholes have been forming upstream of the bridge since 2010. This diverts the creek into the water table, the city said.

“Formation of the initial, largest collapse features required the need for two major projects to fill the sinkholes and stabilize the Collier Drive bridge piers with rock and concrete, and to construct a concrete channel structure beneath and upstream the bridge…” the proposal states.

City officials declined interviews, but instead sent the proposal to 10News.

The same document points to the nearby Sevierville Quarry as a possible culprit. It says the quarry reaches 300 feet below the surface, and operations there currently include significant water removal, or "dewatering," from the pit. The city believes water from Middle Creek is funneling into the quarry after a tracer dye test.

The mound of dirt removed from the Sevierville Quarry off Collier Drive.

“Dye was injected into Middle Creek at the point where the creek loses flow just upstream of the bridge and was detected where the discharge from the quarry flows into the West Prong Little Pigeon River,” according to the proposal.

The report from the USGS, released Friday, affirms that suspicion. Between October 2015 and October 2016, the USGS found groundwater levels near the quarry are lower as a result of "dewatering" in the quarry.

“The lower groundwater levels likely are a contributing factor to the formation of sinkholes near the Collier Drive Bridge at Middle,” authors of the report wrote.

Vulcan Materials, which owns the quarry, disputes the report’s findings. In a statement, the company said the report has "glaring omissions," and says sinkholes appeared only after the bridge was built.

Vulcan also noted the quarry opened 50 years before the bridge.

“While we disagree with the incomplete report’s methodology and conclusions, we remain committed to work with the city to address any issues associated with the bridge,” Vulcan’s statement read.

Vulcan claims the USGS also failed to assess nearby development and the bridge’s impact itself.

“As a neighbor and a partner, we have a strong interest in helping identify the geological and hydrological conditions in the area that could have impacted the bridges,” Vulcan said.

Officials at the city of Sevierville declined to comment on the report’s findings until it can be reviewed further.