The man began a hike in Rhea County's Pocket Wilderness area Monday, May 10. Crews found and recovered his body Saturday. 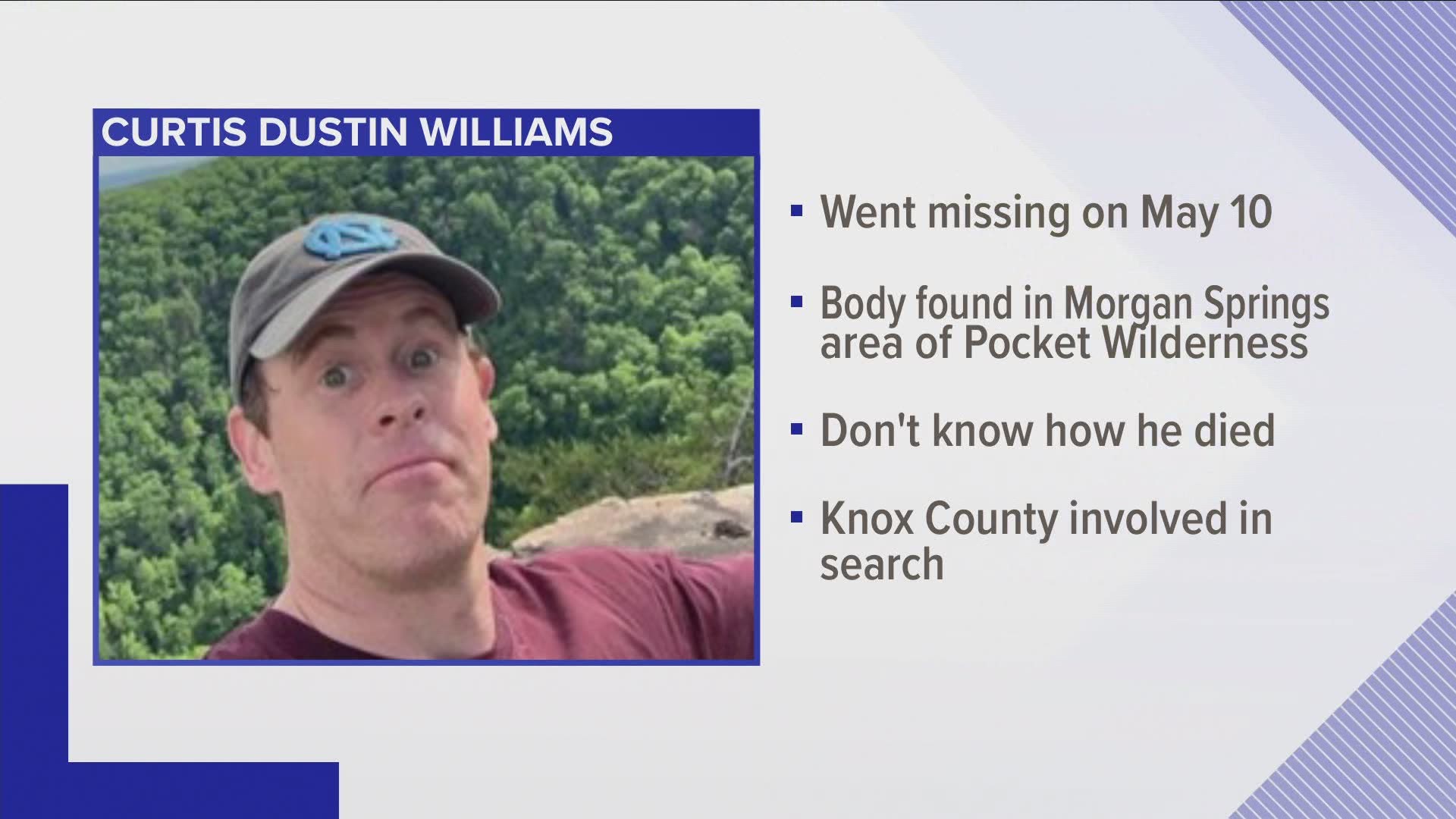 RHEA COUNTY, Tenn. — UPDATE (May 22, 2021): The Rhea County Sheriff's Office said crews have recovered the body of a North Carolina man who disappeared in the Pocket Wilderness on May 10.

According to Detective Rocky Potter, search crews were able to recover Curtis Dustin Williams' body on Saturday afternoon after they had widened their search, bringing in extra volunteers and rappel teams from several counties -- including Knox County.

Authorities said they located the body in the Morgan Springs area of the Pocket Wilderness. They said it is unknown precisely how he died at this point.

Officials said in a tweet that the team was been deployed to Rhea County on Saturday morning.

The Knox County Rescue Cave & Vertical Team was requested and has since deployed to Rhea County, TN this morning in an effort to assist with the search for Curtis Dustin Williams, who went missing in the Pocket Wilderness area earlier this week.

EARLIER THIS WEEK: After four days of searching, a dog that was walking with a missing hiker from Rhea County has been located and returned to its owner. Search and rescue crews are still looking for the man.

Investigators say finding the dog is a huge piece of the puzzle. They were initially searching the entire area of the Pocket Wilderness. Now, they believe they can narrow it down to the contained space where the dog has been.

Curtis Dustin Williams, in his mid-forties, left for the woods around Pocket Wilderness in Rhea County Monday morning. He had shared his adventures with family and friends on Facebook but was last heard or seen from that evening.

"He's an avid hiker. He'd been to several different areas before and hiked in remote areas. He knows the woods, he knows survival," said Rocky Potter with the Rhea County Sheriff’s Office.

Search efforts have been going on for four days now. They have had around eighty people involved — on foot, four-wheelers, planes, helicopters, and drones.

A break in the case late Thursday morning is giving everyone a renewed sense of hope.

"The dog has been returned to the family," Potter said.

This narrows the search immensely.

"We have a cornered area that we believe the dog was in," said Potter, "We got an area that we know we can work."

Now he says efforts will focus on using their K-9s to figure out where the dog had been to hopefully lead them to Mr. Williams.

"Has heightened a lot of people's awareness now. That's a good point to be, we got a major piece of the puzzle, is the animal," said Potter.

Loved ones have been there throughout the search and Potter says they're optimistic for a good outcome.

"They always study his topography before he goes into the woods, so I believe everything will be fine," Potter told us.

Since Mr. Williams was reported missing, they have been searching every day from daylight to dark. If you know anything, contact the Rhea County Sheriff’s Office at 423-775-7837.

PREVIOUS STORY: Crews from across the Tennessee Valley returned to the Laurel-Snow State Natural Area to search for a man who's been missing since the beginning of the week.

On Monday morning, a man in his 40s began a hike in Rhea County's Pocket Wilderness area. Then on Monday evening, his phone was detected in a different section of the area. He hasn't been seen since.

Potter is part of one of the many crews scattered across the Pocket Wilderness area.

“We had the state airplane and the state helicopter, we had a few drones that were out here, we got multiple agencies out here with the search and rescue," said Potter.

They're all searching for the man and dog who went off the grid Monday night.

“He did have a dog he was dog-watching or sitting for," said Potter. "We haven’t located the animal as of yet.”

Potter said the area is huge and they don't have any leads, so there's no estimate as to when crews could find him by.

“He’s an avid hiker," said Potter. "I’m sure he knows how to take care of himself, family says he does, so we’re still optimistic.”

He said volunteer searchers aren't needed right now and the public is not allowed in the Pocket Wilderness area, but there are still things people can do to help.

“If that animal comes up into someone’s yard and they’re not familiar with it or comes across the road, just let us know," said Potter.

Rescue crews are looking for a hiker and dog who went missing in the Laurel-Snow State Natural Area in Rhea County on Monday.

According to Rhea County Emergency Management, Curtis Dustin Williams and his dog were last seen via Facebook Live at Buzzard Point around 3:30 p.m. on Monday.

Sheriff Mike Neal is asking for the public’s help in trying to locate a missing hiker in the area of Pocket Wilderness....

Posted by Rhea County Sheriffs Department on Tuesday, May 11, 2021