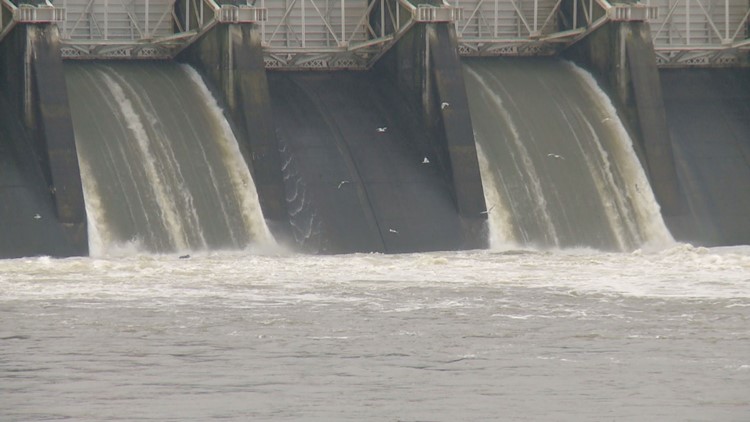 As we finish the fall season and head into winter, the risk of flooding increases.

The combination of reduced evaporation from less sunlight, fewer plants actively absorbing rainwater, and greater precipitation at the end of fall through winter increases the amount of water that flows into our area streams and eventually the Tennessee River.

This increase in rainwater runoff forces TVA to drop the water levels seasonally.

TVA manages these levels with the use of their dams along the Tennessee River and its tributaries.

"Each fall, TVA starts lowering the water levels, and that is to ensure that we have space available for heavy runoff," Scott Fiedler, TVA spokesperson, said.

In the winter, 9 out of every 10 raindrops will make it into the river.

This is significantly higher than what happens during warmer months.

"In the summer, only about 3 of those raindrops make it into the reservoir because you've got evaporation and plants absorb it," explained Fiedler.

Therefore, reservoir levels can be higher during the summer without fear of flooding.

TVA places a priority on preventing flooding, but they also manage the river with navigation and the availability of recreation in mind.

"When you're out on the water during the winter, we've lowered the water levels in the reservoirs, so that's going to bring up some of those rocks that may not be there during the summer. So we need people out there to be careful, be vigilant,” Fiedler advised.

You can better monitor the water by using TVA's lake level app.

"It's a great tool. It gives you our forecasted water flows and generation, so it allows you to know how much water is flowing through the dam," described Fiedler.

It can be used as both a fishing and a safety tool.

Fiedler added that the current river levels are within their normal operating guide, and TVA continues to manage the river in a scientific way.

"What we do is look at our previous summers and winters and want to be able to project and forecast into our models what we think Mother Nature is going to throw at us that year," Fiedler said.

2019 has been a year of weather fluctuations from tremendous rainfall in February to extreme short-term drought in October.

As we head into our colder and wetter months, TVA is ready with their dam system.