Beauford Delaney has been called the most influential Knoxville artist of the 20th century -- but many in his hometown do not even know his name. Now several organizations are working to bring awareness to his legacy. 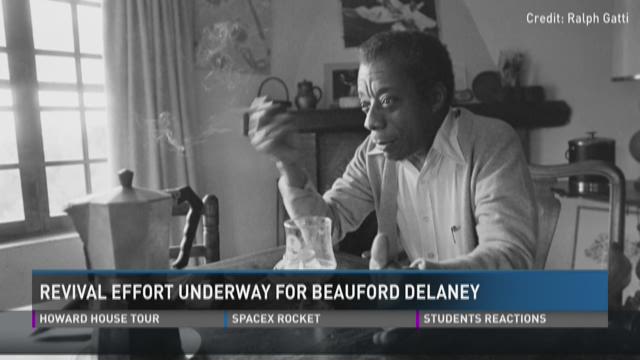 Who is Beauford Delaney?

Historians call him the most influential Knoxville artist of the 20th century -- but many in his hometown do not even know his name.

After gaining prominence in the Harlem Renaissance, some of his work now easily sells for up to $1 million.

"He's not the most famous artist, but he's one of the most influential because of the networks of artists, intellectuals, and cultural figures that he cultivated," said Knoxville Museum of Art Director David Butler.

Beauford had a complicated relationship with his hometown.

He and his brother Joseph grew up in East Knoxville in the early 20th Century at the center of Jim Crow South. There, the brothers’ artistic talents captured the attention of Lloyd Branson, Knoxville’s first full-time professional artist, who helped usher them out of Knoxville and up north to art school.

"They had no future here, because of the color of their skin," Butler said. "As a gay man and as an African-American in mid-20th century, imagine what that's like. The degree to which you can't be yourself."

Butler said Beauford’s complex relationship with Knoxville shaped much of his work, art and life.

"I think he had conflicting feelings about Knoxville. It was a place he loved and a place he hated,” he said. "He carried that around with him his whole life. It was very much a formative part of who he was."

By the mid-1940s, Beauford had gained recognition for his portraits of prominent African-American figures such as Duke Ellington and W.E.B. duBois. He later moved to Paris, where he lived for several years before dying in 1979 in an asylum.

“We're lucky that so much of his work survived,” said Butler. “When he died penniless and in an insane asylum, his brother Joseph gathered up all his stuff and got it back over here.”

Butler said the museum is working with the Beck Cultural Center, the East Tennessee History Center and the Links, Inc. to launch a campaign to bring awareness of Beauford’s story to his hometown.

A part of that push involves bringing a Delaney exhibit from Paris to Knoxville.

"We would like to make him as well known in his hometown as he is in Paris,” said Butler.

It is no easy task. As the value of Beauford’s work rises, acquiring his pieces becomes increasingly difficult for the museum.

"African-American art has been devalued for years. Like other African-American artists, the prices for Delaney's work has now gone up," said curator Stephen Wicks, adding that many of classic works now sell for six to seven figures.

Beck Cultural Center President Renee Kesler said some people in Knoxville are already familiar with the Delaney family name, as Beauford's father was a well-known preacher in the community. However, since Beauford did not return to Knoxville after moving away, she said he was less well-known than his brother Joseph, whose artwork received more recognition locally.

Although the home the Delaneys grew up in no longer exists, Kesler said Beauford’s older brother Samuel owned a house that sits adjacent to the Beck Cultural Center.

"We're looking to renovate it as the Delaney house, so when the community and when the world comes to visit, they can see where [Beauford] would've visited and where he would've stayed," she said.

Beauford's story is a complicated one ripe with highs and lows, but Butler says it's a story with a universal lesson:

"Be who you are -- no matter how hard it is. If you have no money for canvas, you take your raincoat and paint on it."

The Knoxville Museum of Art will hold an exhibition of Delaney's work this summer, in addition to the exhibit they hope to bring from Paris in the fall of 2018.