The list of concerns is growing for detour routes around the I-75 rock slide, as homeowners all of the up to Grainger County worry about the condition and safety of the their daily commute. 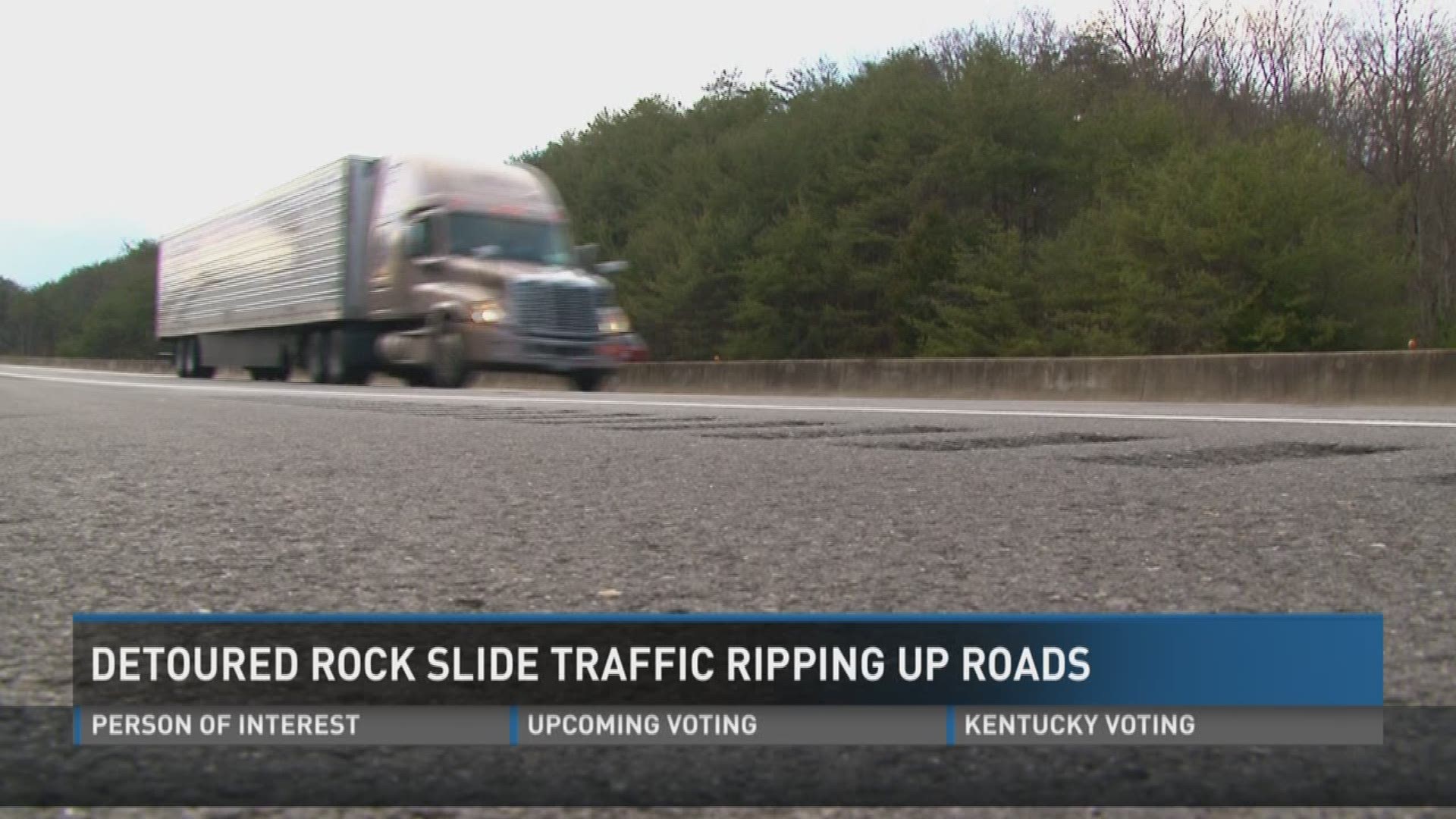 The list of concerns is growing for detour routes around the I-75 rock slide, as homeowners all of the up to Grainger County worry about the condition and safety of the their daily commute.

Since last Friday, drivers have been re-routed to U.S. Highway 25 to stay away from the rock slide, which is right where Laura Samsel has been watching the traffic spike, and the roads falling apart.

“These trucks are so heavy, and it’s constant," Samsel said. "My windows rattle with some of these trucks that come jarring through here, so it’s pretty bad.”

She said the massive amount of trucks keeps her awake at night, and is taking home care to a new level.

“By the time these trucks come down that slope, that incline, all I smell is brakes, and it’s nasty," Samsel said. “The output from these diesels, it coats the grass. You can go barefoot in the grass and your feet turn black. I’m going to have to pressure wash this house. I’ve had to bring cushions in. It’s a mess.”

Residents said the amount of trucks barreling down the highway is not only a nuisance, but a safety concern.

“Since the rock slide, there are so many trucks that are coming down through here that it’s really scary just pulling into your driveway," James Howerton said.

Howerton drives his truck on the detour every day, and said he's watched the heavy traffic rip up the roads.

“If a thousand trucks come up this driveway, and this is just a short driveway, how much damage would be done to the driveway," he said. "This is a road, you know. It’s a highway.”

“When a truck stops or it goes around a curve, it just mushes the asphalt up," Samsel said. "If there’s any heat involved, it all goes to one side, so the roads are in bad shape, it will cause an accident.”

TDOT spokesman Mark Nagi said, “We realize that those detour roadways are not meant to support the heavier than normal traffic counts. Unfortunately, there aren’t many options if the interstate is closed."

"We are working towards getting I-75 opened back up as soon as possible. We appreciate the patience of local residents while the rock slide is being repaired,” Nagi continued.

Until the interstate reopens, residents hope drivers can be conscious of the new dangers outside their homes.

“It’s the necessary of two evils to have people come this way," Howerton said. "But they need to realize they need to slow down.”

Nagi also said TDOT does not have any specific plans to resurface the detour routes, and the closed interstate section is scheduled to open by April 15.

“They just did a wonderful paving job just a couple years ago," she said."I was so proud, and now they’re just going to have to do it again. They’re going to have to start all over. I wish they’d start tomorrow.”