The county would rent the 12-floor TVA Tower East, move KCS's central office there, and sell the Andrew Johnson Building on Gay Street. 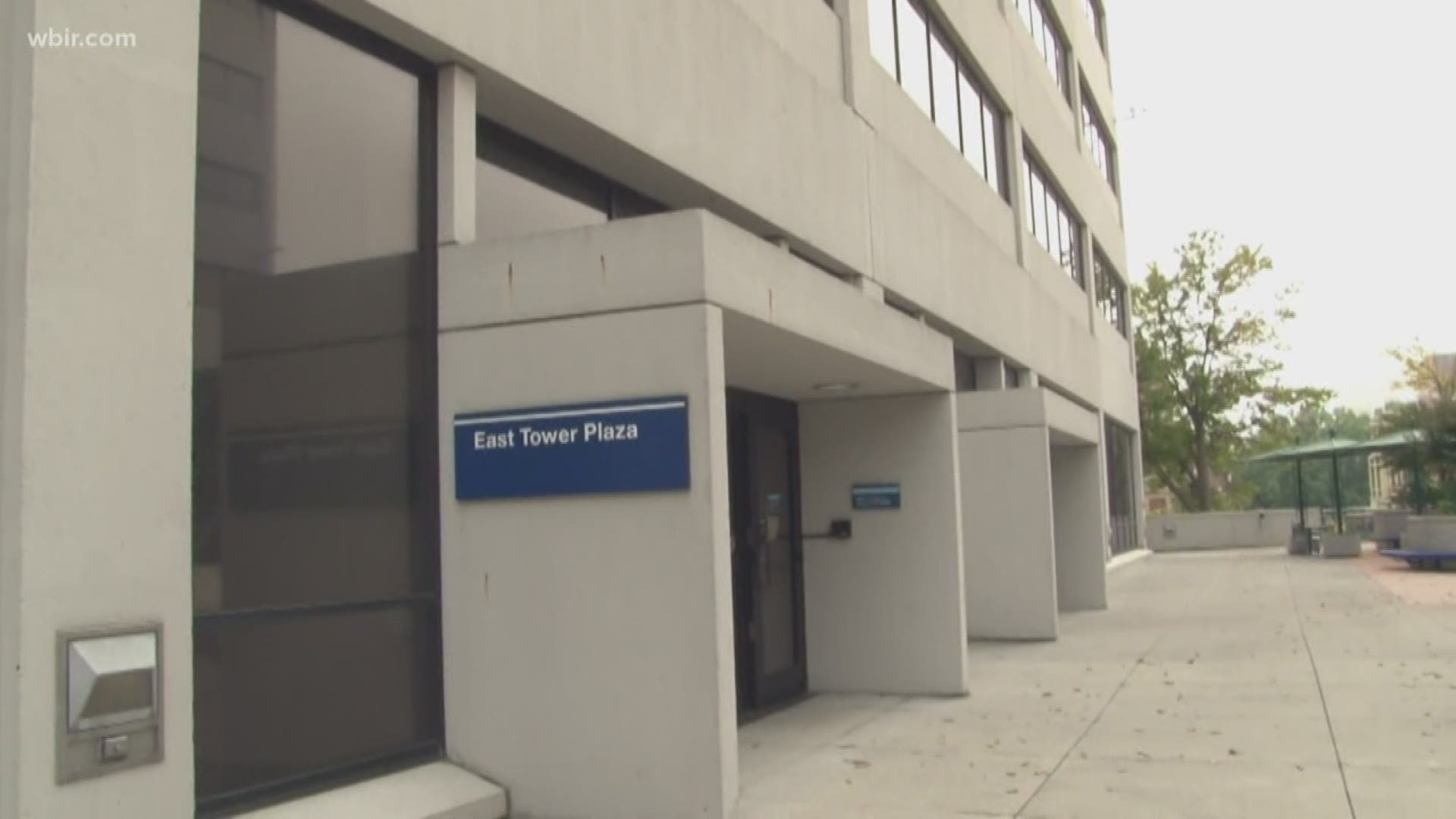 KNOXVILLE, Tenn. — After about two years of negotiation and planning, a complex real estate deal that would shift key Knox County educational offices into a vacant TVA tower and put the Andrew Johnson Building back on the market has more questions that need answering before such a deal becomes final.

County leaders had been confident a vote on the deal would happen before the end of the year, but legal questions raised in the past week has caused that confidence to wither. Before the vote Monday, Knox County Mayor Glenn Jacobs asked commissioners to delay the vote until January 2020.

"What we plan on doing is asking for a deferral to ensure everything is in order, to make sure the commission has all the information that they need... but there is going to be a vote one way or another in January," Jacobs said.

The commission agreed to the request -- deferring the vote until January. Mayor Jacobs asked for a special meeting next month so he can go over why the move would be good for the county.

The Knox County Board of Education met to vote on signing into the agreement on Dec. 11 and voiced support for the move, but board members decided to defer the signing until the county can confirm such a move is legal after concerns were raised at the Knox County Commission's work session on December 9.

The legal challenges were raised over moving Knox County school board administrative offices into the building by law director Bud Armstrong, who  suggested the move could face problems over school personnel custody and control conflicting with federal security measures in the building.

The contract states Knox County will be required to adhere to TVA and federal security requirements, including mail screening.

The question was then posed: Is it legal to put school board administrative offices in a facility that has to live up to those federal security standards?

Given the stricter standards, legal analysis suggested there could be issues if a school employee is deemed to be a security threat to TVA, which means they could be asked not to work in the building by TVA.

Armstrong cautioned the commission with moving forward -- saying the contract is still 'incomplete' at the moment and some unanswered questions need to be addressed.

County leaders then discussed the possibility of petitioning state lawmakers to get a legal opinion from Tennessee Attorney General Herbert Slatery III -- which could take months to make happen.

Regardless of the legal issues posed, both bodies must approve the deal.

Knox County Mayor Glenn Jacobs, following months of work by his staff and that of former Mayor Tim Burchett, wants to begin leasing the 12 floors of TVA Tower East. The bottom six would be for the school system's central offices, and the top six could be used by the University of Tennessee system.

The school system has been in the Andrew Johnson Building on Gay Street more than 20 years. The building is an old hotel, built in the late 1920s. Its space is chopped up and narrow -- not conducive to open office space.

If school administrators leave the AJ Building, private developer BNA Associates of Nashville is prepared to buy the building for $6 million and turn it into a boutique hotel.

Jacobs and his county staff favor the deal for several reasons. It'll put the AJ Building back on the tax rolls, improve the KCS's working space and allow UT educators to become neighbors, creating possible options for working together.

What the AJ Building would be valued at for tax purposes still must be determined. It's been off the tax rolls many years.

Records distributed last week to county officials and obtained by 10News lay out the terms of the deal.

One document, a memo of understanding between the mayor, County Commission, the school board and Superintendent Bob Thomas, states the county "will use proceeds to offset buildout costs of floors P-6. Additionally, Knox County government will pay all buildout costs associated with the TVA East Tower, and cover moving expenses."

By then, it's even possible the county could end up acquiring the building.

The county will start out paying TVA 37.5 cents a square foot for the space, with 1 percent increases each of the first five years.

"The rate is back-end loaded with the Year 6 rate stepping up to (64 cents) a square foot with 1 percent annual increases for the rest of the term and any extended terms," a contracts summary states.

Downtown office space goes for much more per square foot.

TVA will be responsible for building repairs and replacements.

Knox County will have to pay for security, custodial services, trash removal, pest control and mail delivery. The government will have its own building entrance security measures, according to the county.

"Knox County will be required to adhere to TVA and federal security requirements, including mail screening," the contracts summary states.

As part of the deal, TVA also will sell its Summer Place parking garage and office space near the TVA East Tower, which sits alongside the West Tower at the head of Market Square. Summer Place features 700 parking spaces.

With downtown traffic increasing and parking space limited, acquisition of the parking garage is considered a premium. The garage and adjoining office space would cost $1.6 million.

Knox County will have to provide its own chilled water to cool Summer Place starting in June 2021, records state.

TVA will have the right to keep 20 of the parking spaces in the garage's first floor for as long as TVA keeps its primary corporate headquarters in the West Tower.

It also gets an option to use "up to 400 parking spaces (at Summer Place) at fair market rates for up to 40 years after closing..."