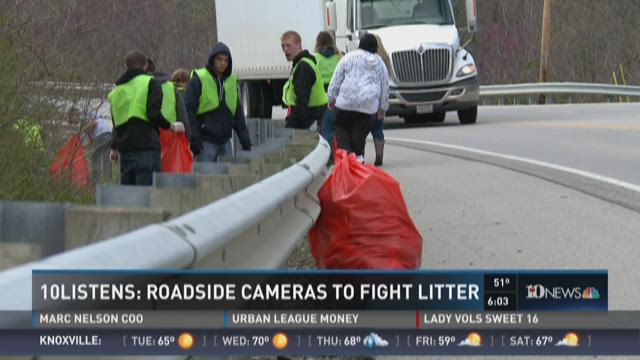 Officials in Scott County say illegal dumping has become such an issue, they are planning to buy roadside surveillance cameras.

“They keep getting heavier and heavier,” said Yancey, holding a large orange bag full of garbage.

County officials hope picking up that litter might help local business pick up as well. Scott County has the third highest unemployment rate in Tennessee at 9.3 percent, according to state data from November. They are hoping to attract new business, and get more people working.

“We want them to come into Scott County and see a clean Scott County,” said Stacey Kidd, executive director of the county Chamber of Commerce.

She said history is at the heart of the issue.

“People just weren’t educated,” she said. “Use to be back in the old days, you had to burn your trash, or you did dump it, so I think that mentality has just followed us through. Our job is to educate our youth to clean this problem up.”

Officer Dustin Burke, of the Oneida Police Department, is helping to coordinate the purchase of several trail cameras, which will be placed at the most-popular dump sites. The cameras are wireless, and usually used to track game. Now, they will provide round-the-clock surveillance – a way to catch and prosecute violators, but also a deterrent.

Burke said he was approached by a group of residents that wished to remain anonymous. They’ve established a fund for donations at Citizens First Bank in Oneida, he said, under ‘Litter Control.’ He said so far they’ve raised several hundred dollars. He believes it will go a long way towards helping police.

“There’s only so many of us to go around and we can’t be there every time to see them,” said Burke.

The county is also looking to chip in a few thousand dollars from a state grant, he said.

“It’s going to be a big deal once it gets going, and once we start seeing the results it’s really going to take off,” Burke said. “I wouldn’t doubt if other law enforcement across the state starts picking it up and rolling with it.”

“Yeah, it made us realize we’re definitely not going to be doing this,” said Yancey. “It’s not fun to pick up.”