Sevier County continues to have one of the highest case loads across East Tennessee and is considered a COVID-19 'hot spot' in the state. 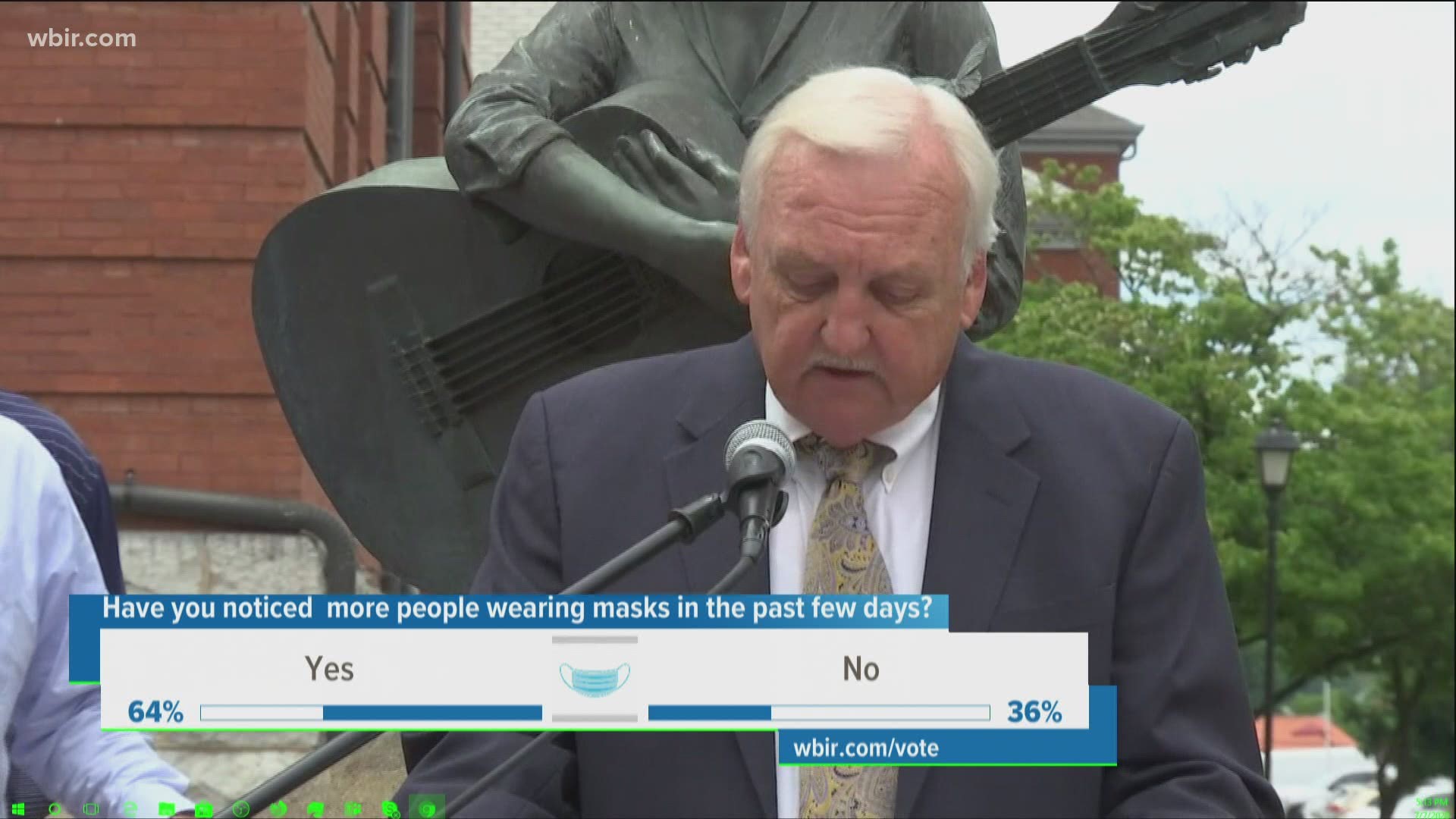 “I am extending the mask mandate for the health and safety of the residents, employees, and visitors of Sevier County,” said Waters in a statement released Monday afternoon. “We are still collecting data from the tests performed during the original mandate, and I do not feel that we have enough information to end the order. The Sevier County School Administration also believes extending the mandate would be beneficial with regards to opening school later this month.”

Waters said he had support from area governments.

The order will remain in place through Aug. 29, according an announcement by the county. It extends a Waters order put in place July 10.

The mandate is a "temporary inconvenience" that can help slow the spread of COVID-19, according to Waters.

“We’ve heard a variety of opinions, including those of the city leaders, health care providers, local businesses, and tourism officials regarding wearing a mask. The majority of the people we’ve spoken to are in favor of continuing the mandate,” the longtime mayor's statement reads.

PREVIOUS STORY: People in Sevier County will be required to wear masks inside most public places to help prevent the spread of COVID-19 as the number of cases continues to spike in Gatlinburg, Pigeon Forge and Sevierville.

The order begins on Friday, July 10 and will last through August 3 and applies to public indoor areas and businesses. Masks are not required outdoors, as the county said it would be "impossible" to enforce.

Businesses are asked to clearly place proper signage that matches the new regulation. People and businesses who do not comply would potentially face penalties such as fines as allowed by the law, but the mayor said he hoped most offenders would be given warnings and educated on the purpose of the order. He also hoped the county could order additional masks that could be made available to give out to people who didn't have one.

County leaders announced the decision Tuesday afternoon after Governor Bill Lee issued an order giving local leaders in 89 counties the option to issue mask mandates in their communities. Sevier County Mayor Larry Waters said the decision was not political and was done out of concern for public health and safety.

"It's something I feel like is necessary... unfortunately," Waters said. He was visibly uncomfortable with the decision, which he said was made jointly by city and tourism leaders. Those leaders, all wearing masks, gathered behind Waters at the foot of the Dolly Parton statue in downtown Sevierville. The statue, serving as a good example, was also wearing a mask.

Waters admitted he wasn't necessarily happy about Gov. Lee's order, which put the pressure on county mayors and other local leaders to make the decision.

"What I'm getting ready to do, we certainly don't take lightly. It's controversial, probably 50/50, 50 percent of people in support, 50 percent will oppose it. It's never good to have the community split," he said.

Sevier County is considered a COVID-19 'hot spot,' according to the Tennessee Department of Health. As of Monday, the county had 368 active cases and was averaging 28 cases a day per 100,000 people -- more than twice that of Knox County and nearly three times the state's threshold for allowing nursing home visitation.

Waters said the decision was made for several reasons. The first was for the health and safety of residents, workers, and visitors. He also said the county could not afford another shutdown and leaders also thought this would give local schools the best chance of reopening this fall.

RELATED: Does your East TN county require a mask?

In addition, Waters said they were very concerned about older citizens and those with pre-existing conditions who are most impacted from COVID-19.

He said he and city and tourism leaders have had hours of meetings since Gov. Lee's announcement on Friday, consulting with lawyers and law enforcement.

He's also heard from the community.

"People are passionate about this, arguments for and against. I understand and appreciate those," he said.

"This was a collective decision, though I'm empowered to do it," he said, adding that he didn't want to do it unless other local leaders supported it.

RELATED: 'Jesus would have worn a mask too' | Some churches now requiring masks for Sunday worship

He said with the help of the health department, they will monitor the positive results to see if the mask mandate is making a difference.

You don't have to wear a mask everywhere

The mandate only applies to indoor areas that are accessible to the public where maintaining six feet of social distancing is not possible. There are exceptions, including houses of worship and private businesses that can impose social distancing guidelines.

You also don't have to wear a mask in your home or car, or when you are eating and drinking at a restaurant, or exercising indoors.

Children who are 12 and under are also not required to wear a mask.

People who have a medical condition which makes it difficult to wear a mask are also exempt.

This does not apply to the school system, which will implement its own guidance.

The mask mandate does not apply to outdoor spaces, though Mayor Waters hopes people will try to maintain a safe social distance from others. He acknowledged that will be difficult in some areas, like downtown Gatlinburg's crowded sidewalks.

RELATED: Gun owners can still lawfully carry while wearing a mask to prevent the spread of COVID-19

Numerous attractions that bring in thousands of tourists to Gatlinburg, Pigeon Forge and Sevierville have remained busy since reopening. People who live and work in Sevier County have told 10News since reopening there's been a massive lack of social distancing and few tourists have been wearing masks.

County leaders said weeks back they had done everything within their power to encourage people to spread out and wear masks, but said they lacked the ability to truly enforce any hard rules locally under the Tennessee Pledge -- that is until the governor made the change Friday evening to allow counties to individually mandate masks.

The Tennessee Department of Health, Knox County Health Department, numerous other public health agencies, doctors and many other experts continue to stress that face coverings are one of the most effective tools available to combat the spread of COVID-19 along with good hygiene habits, hand washing, and maintaining at least 6 feet of distance from others when out in public.

Health officials said that cloth face coverings are not meant to protect the wearer, but to stop people who don't know they're sick from spreading it to someone else.

TDH said there has been a significant increase in the past month in the number of people contracting COVID-19 from strangers while out in public, particularly in small enclosed indoor spaces such as bars, restaurants, and at large gatherings where most people admitted to being close together and not wearing masks.

RELATED: 'Why is it taking so long?' | East Tennesseans wait for COVID-19 results as laboratories see influx of testing