For more than a decade, Knoxville city leaders have been planning for waterfront development on the south side of the river. Now, construction is well underway. 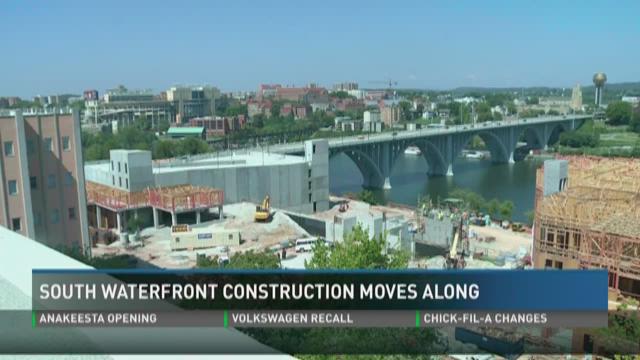 If you drive south on the Henley Bridge coming out of downtown Knoxville, you'll see major construction projects on both sides of the water.

The city’s South Waterfront construction project is bringing apartments, business buildings and a riverwalk to the area.

The dream of a development on the South Waterfront has been in the works for more than a decade. City leaders say the master plan began in 2006, and now construction is now well underway.

On the east side of the Henley Bridge is Regal Entertainment Headquarters, and next to it city leaders say is a 300-unit apartment complex.

“It’s going to be coupled with some great public amenities, including a public riverwalk, a public event space and a public plaza that’s going to sit in the center,” said Knoxville Director of Redevelopment Dawn Michelle Foster.

On the west side, construction has started adding onto the riverwalk near the Cityview complex. Crews are starting to work on building 303 Flats, a 135-unit student housing complex. City leaders hope the housing is finished by fall of 2018.

City leaders say the waterfront project has about $160 million in private investment. They hope the project is mostly complete by the end of 2018.

“All in all, it's going to be a great opportunity, great vibrancy brought to the South Waterfront,” Foster said.