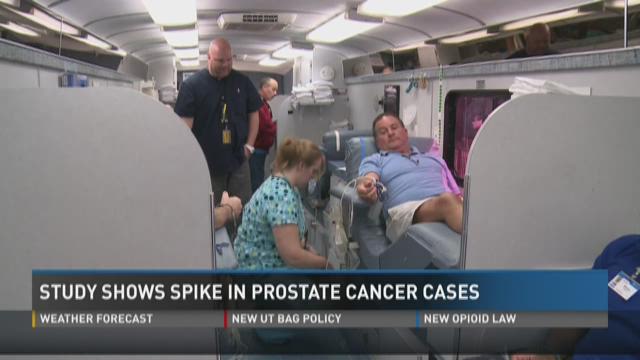 A new health study shows a 72 percent increase in the number of metastatic, or widespread, prostate cancer cases in the last decade.

The study, reported by Northwestern Medicine, considers whether the rise of cases is because the disease becoming more aggressive or men are getting fewer screenings.

“The findings of the study were a little bit controversial," Dr. Wesley White, urology specialist at University of Tennessee Medical Center, said. “The problem is is we don’t know if we’re comparing apples to apples here. Maybe there’s been an overall growth in the number of men diagnosed with prostate cancer, and that’s why the numbers went up."

White said because the use and effectiveness of PSA screenings, which measure the blood level of a certain protein produced by cells of the prostate gland, have been debated for the last few years, the study may not be as scary as it sounds.

“In 2012, there was a governmental task force that came up and said, based on some studies that had been done, that PSA screening was really a bad idea for men," he said. "They didn’t think that it was actually beneficial in helping men live longer and avoid dying from prostate cancer.”

"I don’t think it’s quite you know, the sky is falling sort of a scenario like we think," he continued. "But it does start to bring up questions again about the appropriateness of PSA screening and seeing a urologist in order to have screening for prostate cancer.”

Jack Evans credits a free PSA screening he got at UT Medical Center in 2001 for saving his life.

"I remember thinking, 'Well, maybe they mixed up my specimen with somebody else.' There’s always that possibility, denial,” he said. “Fortunately, today my PSA is zero. I’ve been cancer free for those 15 years.”

Now 74 years old, he fell right into the age bracket targeted by the disease.

“We really feel that the men who benefit the most though are between the ages of 55 and 70," White said. "That’s where the main studies that have shown a decreased risk of dying from prostate cancer, those are the men that really need to have it done every year.”

He said UT Medical Center has taken more steps to screen patients who really need it, using an MRI to better give a diagnosis, and even practicing surveillance instead of jumping to rash treatments.

White said 30,000 men die each year from prostate cancer, and 180,890 new cases are expected to be diagnosed just this year.

As those numbers increase, Evans stays proactive as he gears up for the Ninth Annual Man Run.

“It’s just another way of bringing awareness to men in our community," he said. "Every one of us has a man in our life, whether it’s our father, brother, uncle, someone is going to be affected by either getting a check or not.”

Becoming the honorary chairman of the event when it started, Evans said he hopes to see 1,500 people there.

“We were kind of one of the first in the country to do this," Evans said. “We value life. Every life matters."

The Friday following that event, White and others will offer free PSA screenings at UT Medical Center.