On Wednesday, the Memphis City Council unanimous approved the sale of two public parks, each for $1,000, that had statues of Nathan Bedford Forrest and President Jefferson Davis. 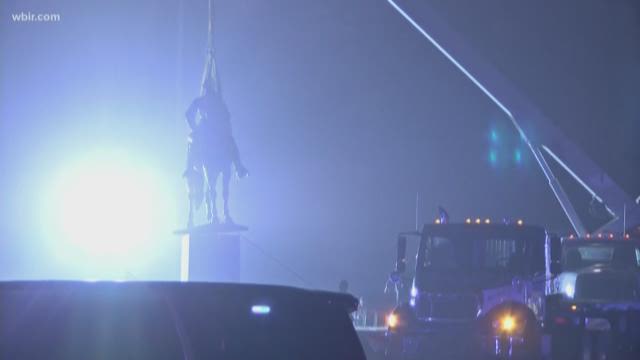 On Wednesday, the Memphis City Council unanimous approved the sale of two public parks, each for $1,000, that had statues of Nathan Bedford Forrest and President Jefferson Davis.

The sale, made to a nonprofit Memphis Greenspace, circumvents a state law that required the city to get approval from the Tennessee Historical Commission in order to seek the statue's removal. Approval was necessary because the statues were on public property.

Noting that the state Historical Commission denied the city's application to remove the statues, Casada and Williams said the council's action violates the spirit and intent of state law.

"We are governed by the rule of law here in Tennessee and these actions are a clear infringement of this principle and set a dangerous precedence for our state," the Republicans said.

"We look forward to beginning this investigation and addressing this important constitutional issue as we prepare for the 2018 legislative session in Nashville."

Among the questions Casada and Williams are asking are whether the city violated sunshine laws by coordinating with the private company on the sale of the property. They also asked whether anyone would personally gain from the "rapid and clear undervalued sale" of the properties and whether existing state laws were violated with the statue's removal.

Lt. Gov. Randy McNally said Thursday afternoon he was "saddened" by the city's decision to "make an end run around the law and the explicit intent of the General Assembly."

Admitting that Forrest and Davis had "troubling histories," McNally said it was important to consider the entire historical narrative while deciding which aspects of history to honor.

"The apparent violation of the sunshine law in the selling of the parks is concerning," McNally said, noting that the city's mayor and council must uphold state laws. "Whether they ran afoul of the letter of the law is not clear. That they violated the spirit of the law is undeniable."

The removal of the statues and the action by Memphis officials was met with praise and criticism on social media by legislators on both sides of the aisle.