Bobcats can look like oversized cuddly house cats, but a woman learned looks can be very deceiving in more ways than one. 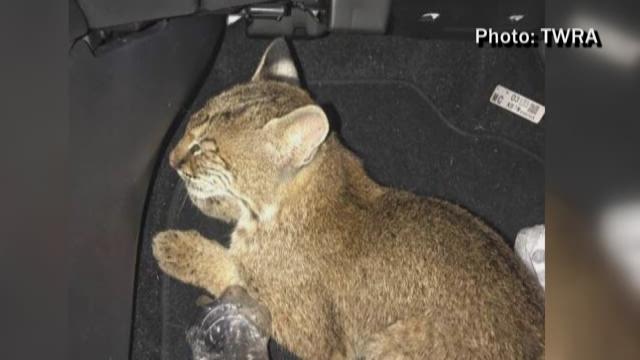 The Tennessee Wildlife Resources Agency posted the story Friday morning to Facebook. Apparently, the woman found what she thought was an injured bobcat on the road and decided to take control of the situation. She soon learned there is no controlling unpredictable wild cats.

Fearing for the creature's safety, the woman picked up the bobcat and put it in her car in hopes of getting it the care it looked like it needed. Honestly, looking at the pictures that TWRA shared it's easy to see how someone could be disarmed by such a docile-looking and adorable-but-definitely-wild cat. Buckle up, buckaroo!

Up to this point, the bobcat had been as tame as a tabby. The woman brought the cat inside her home and closed it inside the laundry room for the night with hopes of taking it to a licensed rehabilitator. Well, at least she INTENDED to keep it there for the night, but the bobcat had other plans.

A woman kept an 'injured' bobcat in her laundry room before it recovered and caused a ruckus in her home. (Photo: TWRA)

Later in the night, the bobcat showed its true colors as a magnificent and cunning beast and decided it wanted out of that laundry room. To put it one way, the woman said it became "unmanageable," so we can only imagine what kind of noises were coming from that laundry room.

The woman decided it was best to leave this situation in the hands of experts, so TWRA officers were called to come to the rescue.

The officers caught the bobcat without trouble, but here's the kicker: The animal was completely healthy and had been all along. Perhaps it was stunned at the time she first found it, but there's no denying this was one clever cat.

TWRA officers released the bobcat back into the wild where it belongs and emphasized, as always, not to pick up injured or orphaned wildlife no matter how cute or innocent they look. Consider it lesson learned!