They're back! Two elk repeat trip to Tennessee side of Smokies

In 2018, three elk from N.C. made a surprising trip over the highest peak in the Smokies to hang out in Tennessee a few weeks. Two have repeated the trip in 2019. 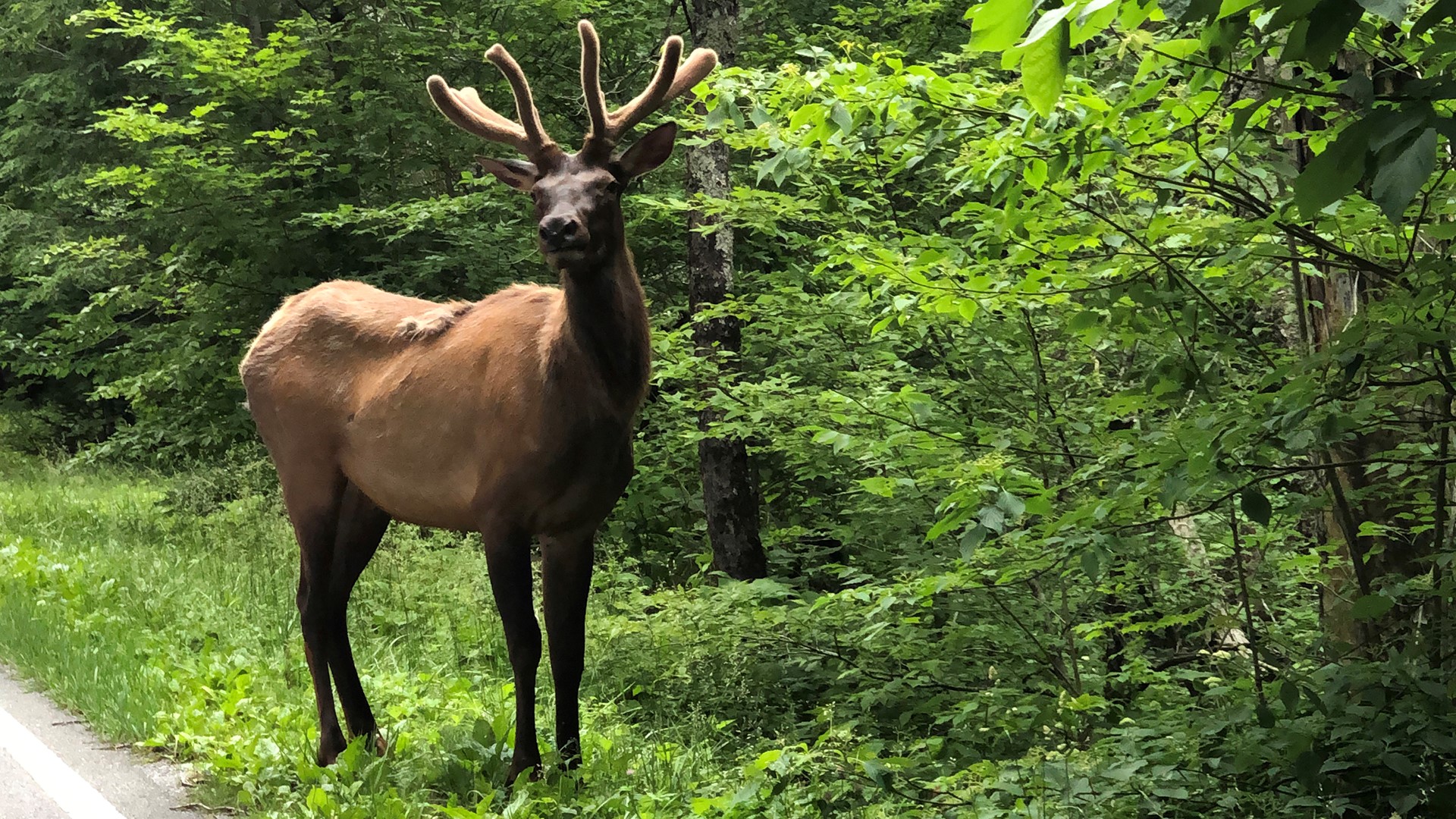 GATLINBURG, Tenn. — Drivers in the Great Smoky Mountains National Park (GSMNP) are hitting a rare traffic jam on Newfound Gap Road.  Two juvenile elk have casually made their way from North Carolina to the Tennessee side of the park near the Chimney Tops trail.

Three young elk shocked biologists by making the same trip in 2018. The surprising part was the route the elk took across Clingman's Dome, the highest peak in the GSMNP.  The trip in 2018 marked the first time wild elk had roamed in the mountainous part of Tennessee in a couple of centuries. The young bulls later returned to North Carolina.

RELATED: Elk wanders away from the Smokies, ends up in the SC low country

In June 2018, biologists were unsure if these particular juveniles wandering into Tennessee was a one-time occurrence.  The park placed a GPS collar on one of the three young bulls in 2018.

Credit: WBIR
Traffic jams beside two juvenile elk on Newfound Gap Road on the Tennessee side of the Great Smoky Mountains National Park.

"Of the three that came over [in 2018], the one we collared is currently in Bryson City.  We assume the other two bulls are the two that are here now," said GSMNP wildlife biologist Ryan Williamson.  "It tells me they definitely have a travel path selected."

When the elk showed up near Chimney Tops trail head in 2018, biologist John Yarkovich accurately predicted elk would return at some point.  What he was unsure about was how soon it would happen.

RELATED: Fall in the Smokies: Experience the Elk Herds

"We've seen elk have an uncanny ability to follow a trail from another elk years after that elk has been there. So, even if we don't see any other animals cross over the next couple of years, the next to come across are likely to take the same path these came over," said Yarkovich in 2018.

As with all wildlife, park biologists are warning visitors not to feed the animals or approach them.

Credit: WBIR
Juvenile elk bull along Newfound Gap Road on the Tennessee side of the Great Smoky Mountains National Park.

"Just be extra cautions when driving. There is not a lot of room for those elk and these two tend to be right on the roadside," said Williamson. "If you see an animal, give it its space. You don't want to alter its behavior. Stay back 50 yards. You don't have to get close enough to get a selfie."

RELATED: Antlers and bugles and elk, oh my!

Elk were hunted out of existence in the Smokies a couple of centuries ago.  The GSMNP reintroduced a herd in 2001 in North Carolina, where they've mostly stayed put.  Some elk from the North Carolina herd have ventured to Tennessee before, mostly along the I-40 corridor in Cocke County.

The two young bulls that make the trip across Clingman's Dome and Newfound Gap have a big reason to wander away from home.

Credit: WBIR
Traffic slows to a crawl in both directions on Newfound Gap Road in the Great Smoky Mountains as visitors watch two elk graze on the roadside.

"Mainly because they're getting pressure from a dominant bull in the hierarchy. It is usually the juveniles that wander around into new territory because they've been pushed out by the big bull," said Williamson.

These two young elk have taken a Tennessee vacation away from the big bully for a couple of years in a row.  For now, they will graze in peace.  But like 2018, biologists predict they'll go back across the mountain to North Carolina when they get in the mood for love.

"We have not substantiated any females being over here yet. Until there are females over here, there is not going to be a permanent population," said Williamson.  "But these young juveniles will eventually grow to be dominant bulls. Who knows where they will lead their harem of cows in the future?"