The DA announced Wednesday a skull and other belongings had been found during the search for Kevin Hamby, missing since November 2017. 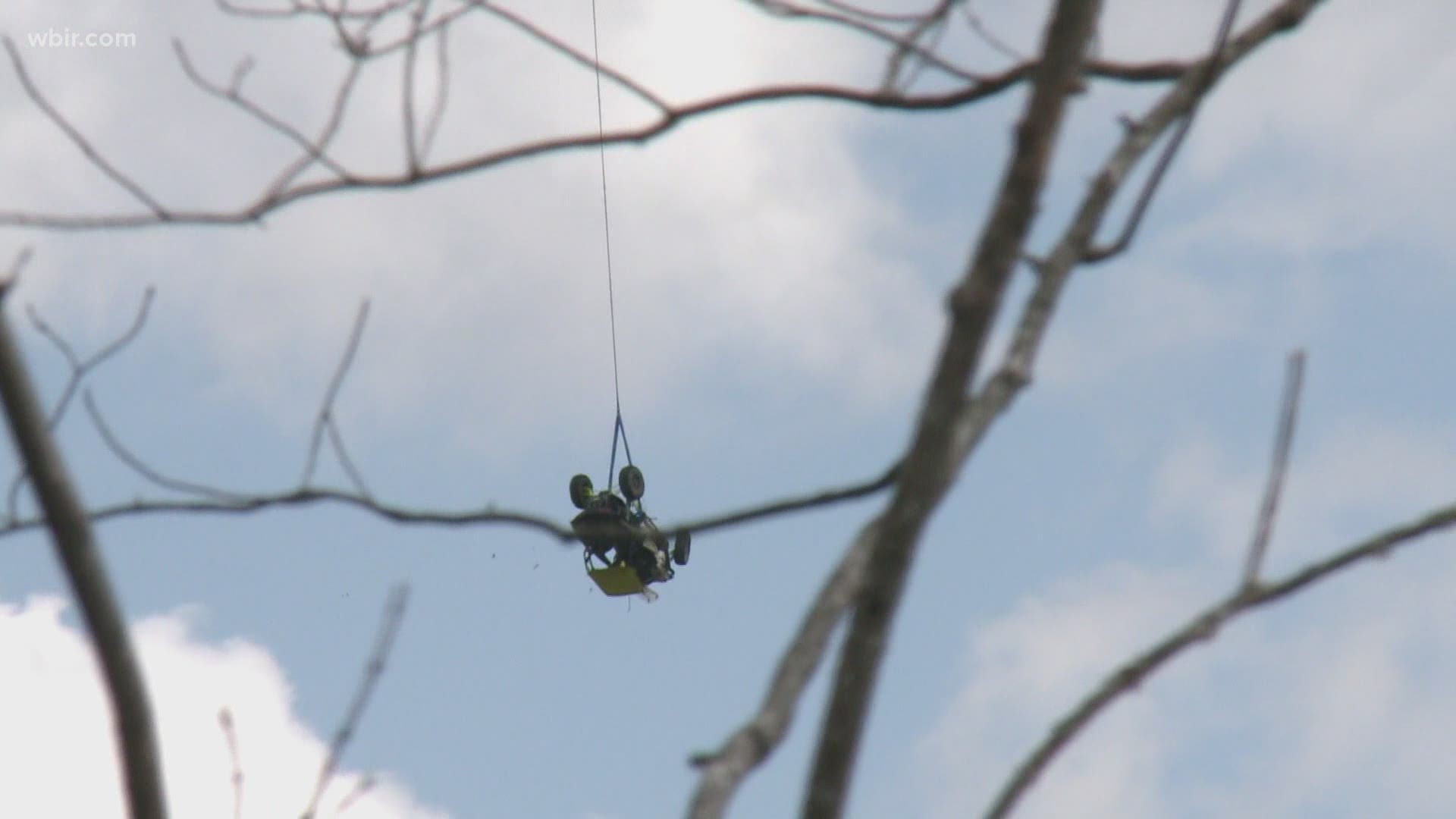 MORGAN COUNTY, Tenn. — UPDATE (MARCH 29): New details in the investigation into what happened to missing Morgan County man Kevin Hamby supports the theory he had crashed the day of his disappearance more than three years ago.

Last week investigators discovered a human skull and items belonging to Hamby after locating his missing Polaris RZR side-by-side vehicle. Investigators said evidence supports the theory Hamby had crashed into a tree at the time of his disappearance, saying an inspection of the tree revealed it had gone through three growing seasons since the initial impact.

Investigators believe Hamby may have tried to walk home after the crash. The skull and belongings were found roughly 100 yards away from each other south of the crash site.

After locating Kevin Hamby's missing Polaris RZR Monday near Pilot Mountain, authorities said a grid search of the area Tuesday revealed a human skull, a belt, pants, and T-shirt about 100 yards away from each other.

Johnson said Hamby's wife positively identified the belt as belonging to him.

"I mean that's what we've been praying for, every minute of the waking day, every night, but when you are faced with it," said Connie Hamby, Kevin's wife.

On Wednesday, a pocket knife purchased shortly before Hamby disappeared was also discovered. Hamby's father told authorities he purchased it for him.

Authorities at the scene speculated in a Wednesday afternoon press briefing that Hamby might have wrecked the vehicle, tried to walk away and had been ultimately unable to survive.

That would explain why various items were found a distance from each other. For example, his pistol was found in water at a waterfall some distance from the wrecked vehicle.

The skull that has been recovered had no marks to indicate violence or deliberate trauma, authorities said.

"It's a whole other kind of pain," said Bailey Craigo, Kevin's stepson.

1 / 7
Russell Johnson/Morgan County Sheriff's Office
38-year-old Kevin Hamby disappeared on November 14, 2017, and had last been seen on the RZR leaving his home in the Gobey area.

Around 3 p.m., a Tennessee Highway Patrol helicopter airlifted Hamby's Polaris off the side of the mountain.

The search for a Morgan County man who disappeared more than three years ago has reignited after state authorities found the vehicle he had been seen riding the day of his disappearance in a remote location of the county.

The 38-year-old Hamby disappeared on November 14, 2017, and had last been seen on the RZR leaving his home in the Gobey area.

A THP helicopter pilot spotted the wreckage near Pilot Mountain, 250 yards from a road used to service the county's 911 tower.

Authorities had searched and followed up on numerous leads, rumors and tips over the years to no avail. Johnson announced Monday they had finally located a key piece of the puzzle in discovering what had happened to Hamby.

Johnson said he hopes a forensic examination of the Polaris will show how it ended up off the ridge and how long it has been there.

Because of the rugged terrain and unsafe conditions where the RZR was located, authorities paused a grid search of the area with a K9 team until Tuesday morning.

On Wednesday, they planned to call in a THP helicopter to lift the wreckage of the Polaris out of the woods.

Johnson said investigators are also bringing in local forestry experts from the University of Tennessee and state forestry division to identify damage to the tree the Polaris hit as well as sapling growth around the vehicle to determine how long it rested against the tree.

"This will help determine whether the timeframe is consistent with November 2017 or if we have something totally different with the RZR possibly being taken to the ridge and maybe pushed over the slope," Johnson said.

The sheriff notified Hamby's family, saying his father recently heard new information from an individual. Authorities interviewed the individual, which gave them a general location that led to the THP flyover and discovery Monday.

"There have been so many rumors and conspiracy theories about Kevin Hamby‘s disappearance, we are trying to eliminate any possibility other than him become lost, driving off trail and crashing into this tree," Johnson said.

Anyone with information about Hamby's disappearance is asked to call Johnson's office at (865) 346-6262.

"Sheriff Potter is glad to have found the RZR and hopes that it and the search will provide clues to Kevin Hamby’s disappearance, but at the same time, realizes the new grief and questions that the discovery of the RZR may bring for Hamby’s family," Johnson said.