Lt. Governor Randy McNally and Rep. Bill Dunn say it is time for Glen Casada to step aside. 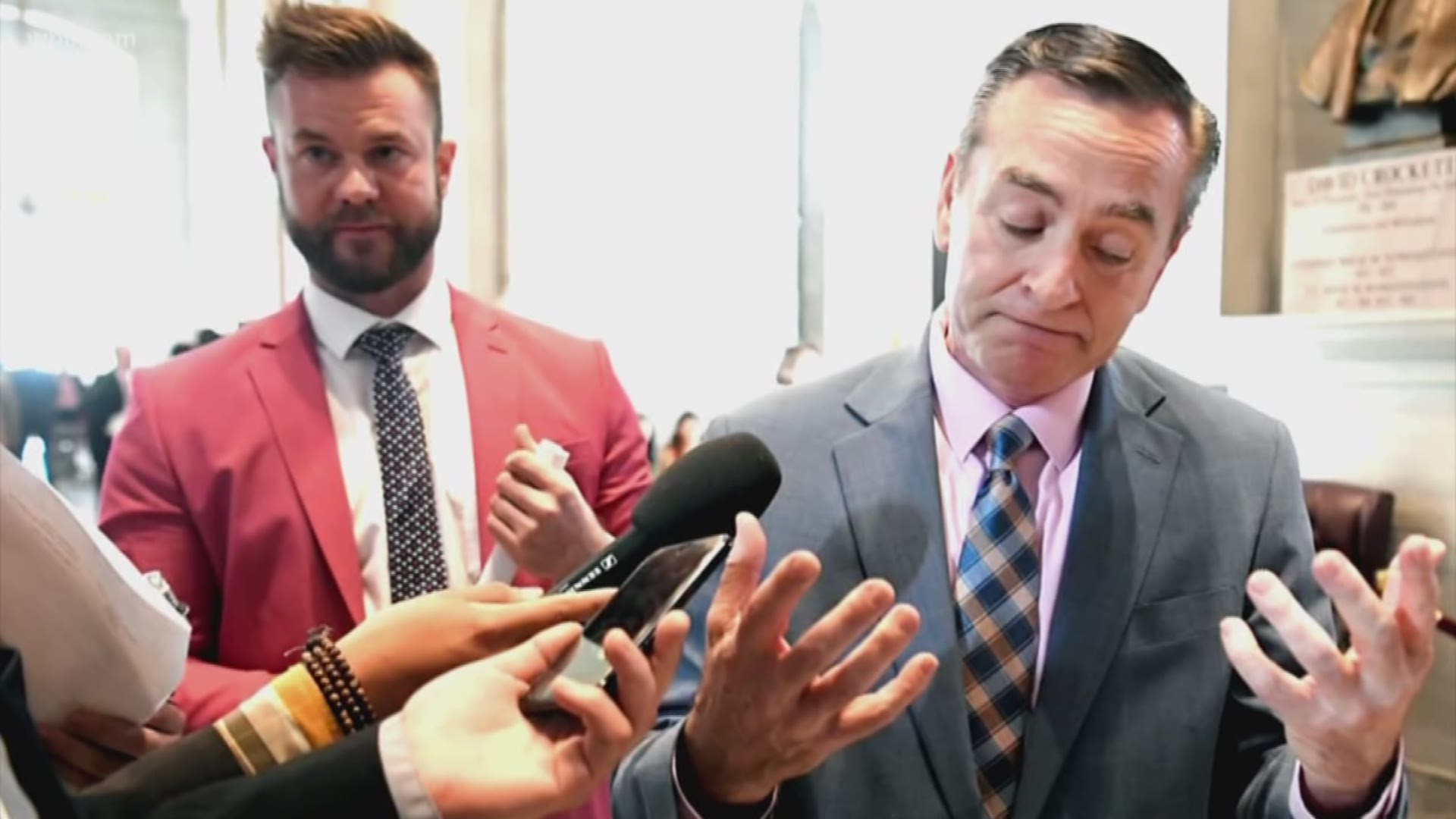 KNOXVILLE, Tenn. — Two top East Tennessee lawmakers are now publicly calling for the resignation of Speaker of the House Glen Casada. In interviews with 10News, Lt. Governor Randy McNally of Oak Ridge and Rep. Bill Dunn of Knoxville also decried allegations that lawmakers bought and sold votes for the controversial voucher bill after a report from WTVF-TV in Nashville stated the FBI is investigating whether improper incentives were offered.

“I feel that he should,” McNally said when asked by 10News if Casada should resign. “That’s a decision the house has to make. I feel that they’ll treat him fairly and that they’ll do what’s in the best interest of the state.”

If Casada resigns or is forced out, Dunn would rise to become Speaker. Acknowledging that the succession puts him in an awkward position to speak publicly on this topic, Dunn detailed a private phone call he had with Casada on Tuesday during which he told the Speaker to step down.

“I said I thought he needed to step down,” Dunn told 10News in his first interview on this topic. “I went into details the reasons why. He didn’t agree with me obviously. I’ve let it be known my feelings and each member needs to search their heart and make their decision.”

Casada released a statement Friday afternoon announcing the appointment of a special prosecutor to investigate an email sent by his former Chief of Staff. He submitted a letter requesting the House Ethics Committee issue an advisory opinion regarding his actions related to the resignation of his former Chief of Staff Cade Cothren, related to racist and vulgar text messages.

Casada stated the state District Attorney General's Conference has appointed a special prosecutor to investigate an email that student activist Justin Jones sent to Cothren, who forwarded it to the local District Attorney.

"My desire is for this independent review to be completed as quickly and thoroughly as possible and for all of the facts to come out. To that end, I have instructed the Speaker's office and the joint Legislative Information Services staff to fully and immediately comply with all requests for information related to that email made by the special prosecutor," the statement said.

Dunn brushed off the possibility of soon rising to take the position of Speaker. On Wednesday he told 10News, “I have not directed any member on what action or position they should take.”

During a “Capitol Connections” event hosted by the Knoxville Chamber of Commerce Friday morning, Dunn seemed reluctant about the possibility of becoming speaker in this manner.

“A lot of people are calling me. I’m not calling a lot of people,” Dunn told 10News following the event. “These are serious times and I think each member needs to prayerfully consider what they think is the best approach and we’ll go with what happens. If I have to be the temporary speaker, I will serve in that capacity to the best of my ability.”

Calls for Casada's resignation came after sexually explicit text messages sent between Casada and his former chief of staff Cade Cothren became public. Cothren resigned as other allegations were also leveled against him.

Casada described the lewd conversations about women as "locker room talk" between adult men while talking to a Nashville radio station on Tuesday, but other General Assembly members did not appear to see it that way.

On Thursday, WTVF-TV in Nashville reported the FBI is investigating whether any improper incentives were offered to pass the controversial school voucher bill. Knoxville Representative Jason Zachary switched to vote in favor of the bill after the vote was left open for 40 minutes. The bill passed 50-48.

Lt. Gov McNally spoke freely about what may have happened.

“I think that at best, probably what might have happened would be that there were suggestions made that they might be able to get a project in the individual’s district or something like that,” said McNally. “There has to be a quid pro quo, first of all. A direct relationship. And there has to be some type of financial gain for the person that’s there. If I simply say, ‘if you vote for it, we’ll be glad to see what we can do to help UT,’ that’s a little bit different.”

In an interview with 10News in late April, Rep. Zachary denied receiving any improper incentives in exchange for his vote.

"I got zero, anything personally, zero. That would be illegal. I did not ask for anything from my district," said Zachary. "We are not taking any money away from public schools. We have increased funding to public schools."

McNally also confirmed reports that a white noise system was installed in Speaker Casada’s office in Nashville. McNally told 10News he believed it cost about $2,000 and was also installed in offices around the speaker’s, including the reception area to his office.

RELATED: State confirms that noise machines were placed inside & outside of Casada’s office

“There’s a system called white noise that was installed in his office, not in mine or any other offices,” McNally said. “What it does is it prevents people who are outside the office from hearing what is going on. To some extent, it could make it more difficult to record a conversation.”

As lawmakers huddle to decide how to deal with the slew of controversies, Dunn regrets that the scandals are overshadowing the legislative session.

“It’s not what you want to be the view of people,” said Dunn. “We had a great legislative session. The state is fiscally sound, and all that is being lost because of this controversy.”