Officials in Cumberland County said that the time between October and December is the second most active storm season of the year. 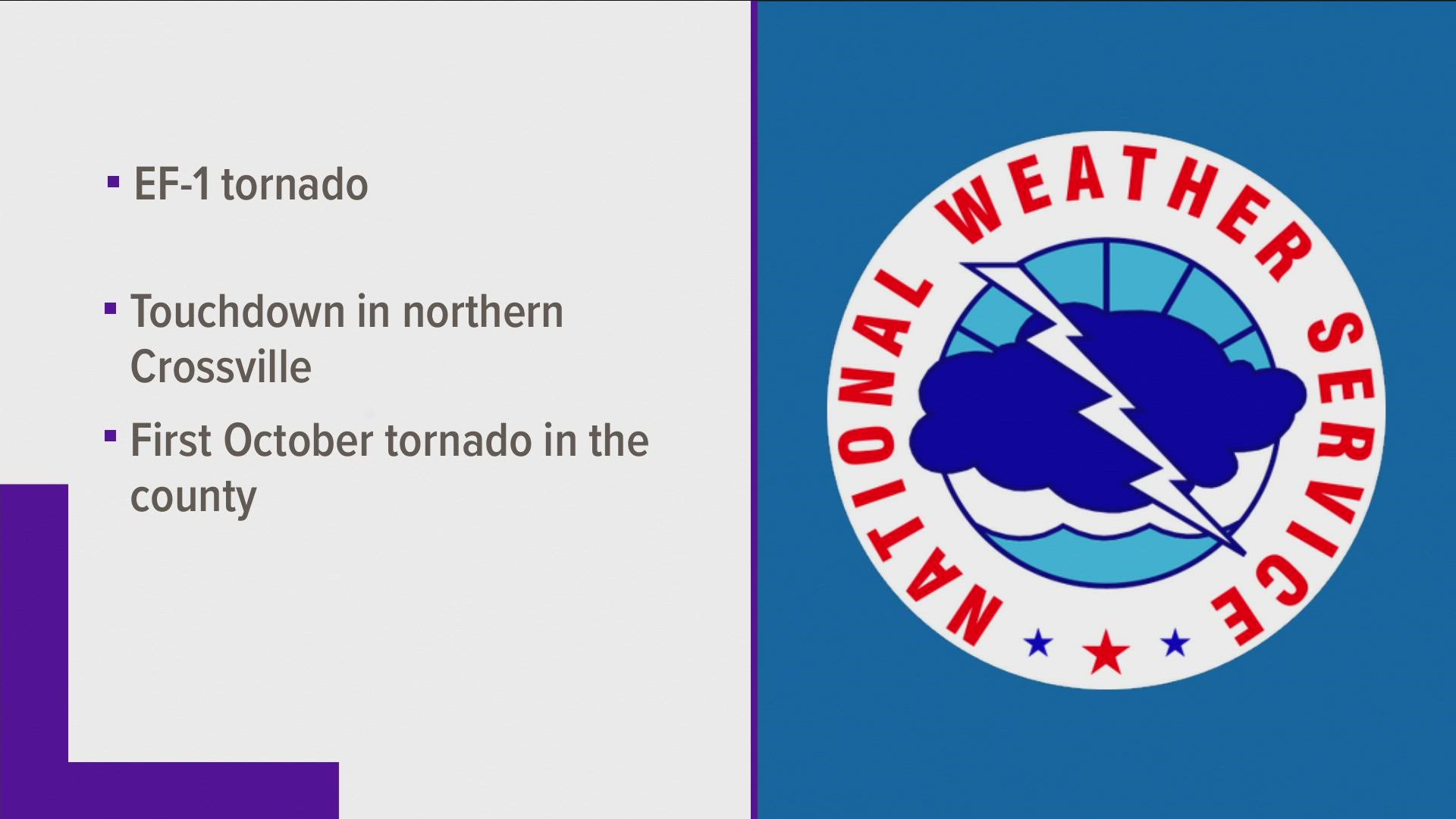 CUMBERLAND COUNTY, Tenn. — Storms swept through the Cumberland Plateau Wednesday evening, placing parts of Fentress and Cumberland counties in a tornado warning. After the storms subsided, responders said that no injuries were reported.

However, they said seven homes were damaged as a result of the storms. Two of those homes also had major damage, they said. The damage included smashed windows, destroyed roofs and lawns covered with cars and debris, according to reports.

The National Weather Service in Nashville said that an EF-1 tornado touched down in northern Crossville, with maximum winds of 90 mph. They said it was around 50 yards wide and the path was around 1 mile long.

It was the first-ever known October tornado in Cumberland County, the NWS said.

Based on a damage survey by @CrossCumbema, an EF-1 #tornado with max winds of 90 mph touched down in northern Crossville (Cumberland County) yesterday, Wed 10/6. Path length ~1 mile long & path width 50 yards. This is the first ever known October tornado in Cumberland County

Officials with the Crossville and Cumberland County Emergency Management Agency said that the time between October and December is the second most active storm season during the years. They urged families to have plans in place in case of severe weather.

Those plans should include two ways for people to receive notifications and they also urged people to have a functioning NOAA All-Hazards Weather Radio.

The agency also shared a post from an independent meteorologist on social media who said he received 4.6 inches of rain Wednesday evening.

The agency also said they submitted pictures and information to the National Weather Service in Nashville. That information will be used to determine the type and intensity of the storm.

Crews were working to clear roads, according to the agency.

They said the storm traveled almost directly north over the Lake Tansi community and the City of Crossville. It caused damage on Rye Woody Rd., Lawson Rd., and Tabor Loop before continuing north into the Woody and Rinnie communities, according to officials.

The storm eventually left the Cumberland County area and entered Fentress County, according to officials. By 9 p.m. on Wednesday, the tornado warnings were over and the storm had left.