President Donald Trump is promising to put coal miners back to work in Appalachia. But critics argue he’s stirring up false hope by pushing an industry that helps him politically but realistically can’t compete in the free market. 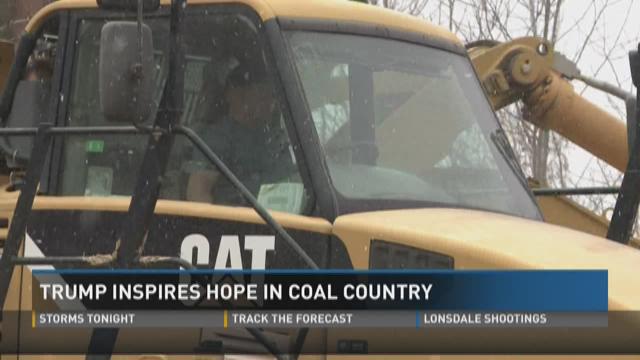 President Donald Trump is promising to put coal miners back to work in Appalachia. However, critics argue he’s stirring up false hope by pushing an industry that helps him politically but realistically can’t compete in the free market.

“A lot of coal miners are going back to work. As we speak we are preparing new executive actions to save our coal industry and save our wonderful coal mines from continuing to be put out of work. The miners are coming back. Our new EPA administrator, Scott Pruitt, a Kentucky native, will turn the EPA from a job killer into a job creator, you watch,” Trump said on March 20 at a rally in Louisville.

The president already issued an executive order in February aimed at helping the coal industry.  The order essentially eliminates an Environmental Protection Agency rule to protect streams. The White House said it harmed coal workers and the communities that depend on them.

Trump said the first executive order was “just the beginning.”

Mining ramps up in Appalachia

Trump’s enthusiasm is renewing hope among miners and their families in southeast Kentucky.

“I'm excited for the people in Bell County [Kentucky] and excited for the coal industry. If you mine it right, this thing should go on forever,” said Wade Hoskins, a third-generation miner who supervises small surface mine operations for Jamieson Construction.

Hoskins said his company had laid off all but a few people, and were preparing to shut down Bell County operations before the election, even though they had an EPA permit to mine 1 million tons of coal in the area.

Hoskins said the EPA regulations had become too burdensome and costly. He was convinced if a Democrat won the White House, the mining operations would be over. He said the EPA’s stream rule would have made it impossible for his company to continue to mine.

"When we got the news in November, we actually started [mining] in December. We've been full-force ever since, actually hiring people and really getting a grip on this thing. It's coming back," Hoskins said.

Hoskins said he’s hired nearly 20 miners, working 60 hours a week, since the election and has buyers lined up.

Coal isn&#39;t just a job for the people of southeastern Kentucky, it&#39;s part of their identity.

Bell County's Judge Executive Albey Brock, the equivalent of a county mayor in Tennessee, said Trump’s election has been “a shot in the arm for the coal industry.”

“It has sent a wave of optimism through the coal industry that some of the industry-killing regulations that took place in the previous eight years will be turned around,” Brock said. “And we’re already seeing that. When he effectively wiped the stream rule off that instantly created more requests for permits all throughout Appalachia because there’s a lot of coal there they can access easily. That they were stopped with that rule.”

Brock said coal-fired power plants that were scheduled to shutter, convert to natural gas or add scrubbers will no longer have to do that.

“What that does is it allows them to enter into longer term contracts so now mining operations can go to presently operating power plants and enter into long-term agreements. That was not taking place prior to President Trump being elected,” he said.

Bell County&#39;s Judge Executive Albey Brock is &quot;cautiously optimistic&quot; about the future of the coal industry.

Coal on the free market

The boost in mining is a win for President Trump politically and the people of Appalachia financially, but in the free market coal is losing. A nationwide decline in coal usage stretches back at least a decade.

The largest public utility in the country, the Tennessee Valley Authority, pledged to cut its dependence on coal and replace it with non-carbon emitting energy. TVA supplies power to local power distributors serving 9 million people in parts of seven southeastern states.

The power provider pledges to use only 15 percent coal by 2027 with growing focus on natural gas. It aims to have 24 percent natural gas, 38 percent nuclear, 9 percent hydro and 3 percent wind and solar as energy sources.

“Natural gas continues to beat coal hands down. Other technologies are right on the heels, clean renewable technology, that are going to continue to beat coal in the marketplace,” said Stephen Smith, executive director of the Southern Alliance for Clean Energy, a non-profit that promotes clean energy.

Smith argues Trump shouldn’t promise coal miners jobs when he has no control over the free market. He also points out natural gas and renewable energy options are cheaper, more efficient, and cleaner. He said many utility companies, like TVA, have put plans to reduce carbon emissions into place that they will not likely reverse.

“The overall market dynamics for the coal industry have been set into motion and they're beyond the even the president’s control,” Smith said.

He said the conversation should instead be focused on diversifying the economy in Appalachia.

“I'm not saying it's going to be easy and I'm not naive about the fact that there's going to be disruptions but let's have an honest conversation about it,” Smith said.

But Bell County's Judge Executive Albey Brock said he’s had a difficult time recruiting new industry without the necessary infrastructure and facilities to entice companies to set up shop in Appalachia.

“How do we compete when there’s already a 50,000-square-foot empty building in Knoxville and we would have to build them one here?” Brock said.

The decline of the coal industry has crushed the economy of Southeastern Kentucky impacting population, schools and hospitals. Brock said each mining job provided three other jobs in the region.

“I've seen families sell their life's possessions on the side of the road in yard sales when they were losing their homes, their cars,” Brock said. He added there are fifth generation miners in Bell County.

Brock said he is encouraged that President Trump has followed through on his campaign promise to negate the regulations of the EPA.

But he says he’s only cautiously optimistic that coal will return to pre-Obama-era levels. He puts the blame on the decline of the industry squarely with Obama and the EPA.

“Some of the damage that has been done in the last eight years is going to be hard to undo. Even though you have a president and an EPA that’s going to be more respectful and friendlier to the coal industry. We’re cautiously optimistic as to how much of a difference it can make.  We are seeing improvement. We know it’s going to be better than it was. How much better? That’s yet to be seen. It’s still early yet.”

Hoskins doesn't want to see his way of life disappear, but the miner is encouraging his children to look for a future away from coal.

“As a parent, you're always looking out. I've seen the ups and downs of coal mining so I don't want them to have to deal with that struggle,” Hoskins said.