The TVA uses its River Forecast Center to manage water levels across the Tennessee Valley. It's especially useful during and after rain storms to prevent flooding. 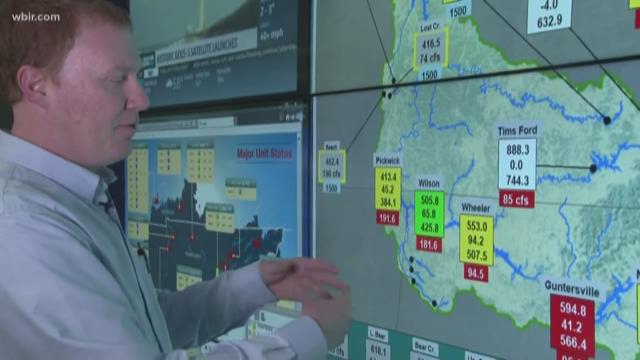 The recent rain has caused flooding all over the Tennessee Valley.

TVA is using its sophisticated system to make sure the damage doesn't get out of control.

Even when the waters rise in Tennessee, the TVA knows how to handle it.

"We are highly prepared for this type of weather event," said Everett.

The storm rolled through, giving East Tennessee its fair share of flooding in places like Sevierville, Monroe County and in the Smokies.

But Everett has an even wider map to look at.

"As we get down to Northern Alabama, we've had a tremendous amount of rainfall," said Everett, as he pointed at the huge wall of screens in the office.

He can see everything at the River Forecast Center -- all the water levels and data he needs to control the dams.

"Flows are a lot higher, which is why we're trying to hold back as much of the water as we can up in the eastern part of the valley," said Everett.

So here's how it's worked with this latest storm: when it rains, water levels across the Tennessee Valley go up. It rained a lot in the western part of the valley in the last couple of days.

The water flows down the Tennessee River, from east to west, so the TVA slowed that water down using reservoirs.

If they hadn't, the lakes in the western part would've flooded with not just the rain water, but the water coming down the river as well.

"When we get these rain events, we're using dams like Douglas, Cherokee and Norris, these are tributary dams," said Everett. "We're going to use those dams to store water."

It's all controlled in a room in downtown Knoxville.

"The brown line is how high the river level could've been, and the red line is where we actually regulated the river to," said Everett, as he points to a line graph on the wall. "The difference is about 15 feet, which in terms of damages avoided that's about $26 million in flood damages that we were able to prevent, just be operating Norris Dam the way we did."

Everett said the water they're storing will be released slowly, so that the lakes can lower again, should it rain a lot again this spring.