Uniformed officer asked to leave restaurant because he had service weapon

A Tennessee Wildlife Resources Agency officer was asked to leave the Outback Steakhouse in Cleveland Friday night because he had his service weapon on him. 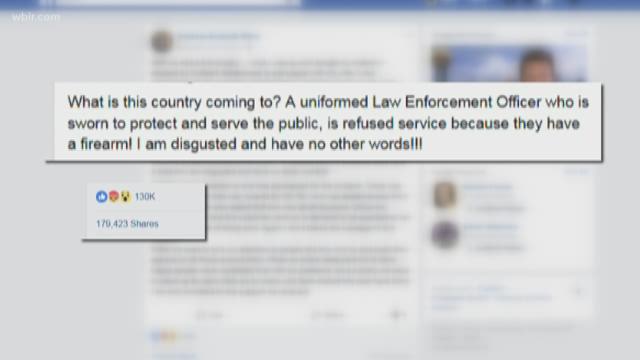 (WRCB) - A Tennessee Wildlife Resources Agency officer was asked to leave the Outback Steakhouse in Cleveland Friday night because he had his service weapon on him.

In a public post on Facebook, Andrew Ward shared the experience. He said he was asked by a manager to remove his weapon and put it in his vehicle. He explained that he had to have it on his person because he was in uniform.

According to the post, the manager made a phone call, and then asked the officer to leave citing company policy that makes Outback a gun free zone.

Ward said Outback contacted him and apologized. They also gave him a $100 gift card.

In a follow-up Facebook post, Ward shared why the manager confronted him. He says a patron at another table reported being scared for her life.

"She said police are shooting people, and she could have gotten shot in the parking lot, and the manager had to walked her and her husband to their vehicle," Ward wrote in one of three posts he published about the incident. "We were told it was a policy they don't allow guns - if we would have known there was a complaint we would not have went anywhere! Seriously, she was scared for her life? We were joking and laughing with our server as we ordered, then prayed. What was scary about that?"

Ward said he and his family have accepted Outback's apology. He said they understand that a mistake was made.

"There was a mistake made and that’s it... We all make mistakes and must move forward with our lives," Ward wrote.

A spokesperson from the corporate office of Outback Steakhouse said in an email that the manager made a mistake:

"We’ve always allowed uniformed law enforcement officers to carry their sidearms while dining with us. A manager made a mistake. We have contacted the guest personally and apologized."

A second spokesperson with the corporate office at Outback Steakhouse said law enforcement is an exception to its policy.

"We've always allowed uniformed law enforcement officers to carry their sides arms inside our restaurants. A manager made a mistake and we have discussed this with her. We have contacted the guest personally and apologize. Law enforcement is the exception to our policy. We are a restaurant where families often dine and where liquor is served and merely want all of our guests to feel comfortable."