Three Black student-athletes started planning the march in June, in collaboration with the athletic department and university leaders. Around 1,000 showed up. 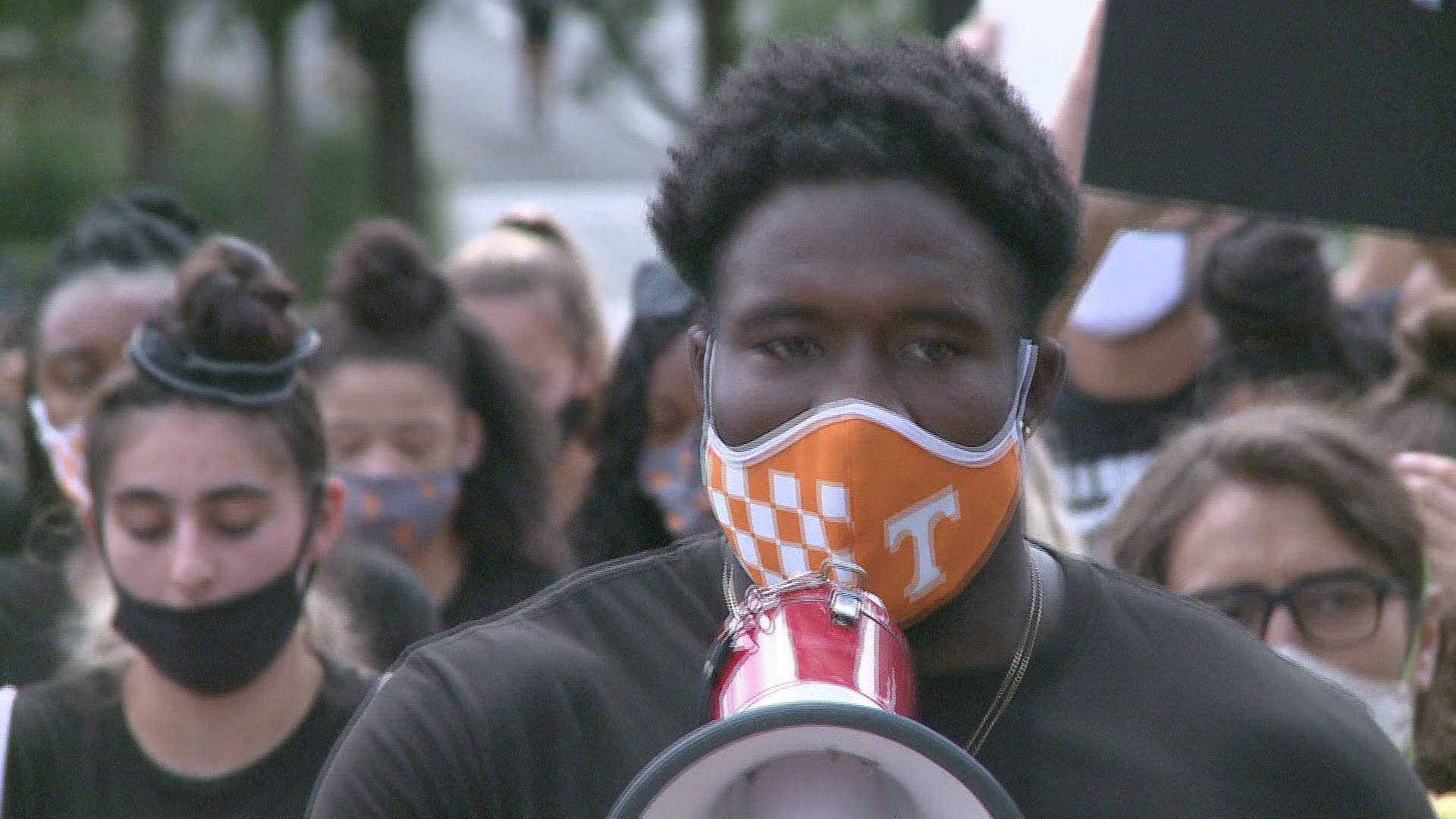 KNOXVILLE, Tenn. — UT student-athletes led a march through campus against systemic racism on Saturday. Different teams with hundreds of students, coaches and school leaders joined in to make their voices heard.

By noon at the University of Tennessee, marchers gathered at Circle Park and prepared to step foot on a march through campus.

Through Rocky Top, the group chanted messages like, "hands up, don't shoot!" and "no justice, no peace!"

Every chant, step and sign marching down Volunteer Boulevard was a symbol of support for Black lives everywhere.

"The statement Black Lives Matter is a reminder that we matter too, because people always seem to forget about us," organizer and track and field athlete Vanessa Watson said to the crowd through a megaphone.

Three Black student-athletes started planning the march in June: Mariah Smith who is a UT women's golfer, Trey Smith who is a defensive lineman for Vols Football and Vanessa Watson, a track and field athlete. It started as an idea and was all in collaboration with the athletic department and the university.

The goal was always to gain support and to help fight against systemic racism.

"We're just gonna march, you know, we wanna see a change and we're using our platform to do that, so hopefully we will garner a lot of support and we will help move our community and our campus in a better direction," Mariah Smith said.

Hundreds of UT athletes, coaches, campus leaders and students showed up with masks on to support. The university displayed signs encouraging social distancing at the event.

"If you look around, not everyone looks the same here, not everyone comes from the same backgrounds," Trey Smith said. "So that's the beauty of it, having the understanding to unite for a common goal because we are all just human beings."

They marched down the road, through campus, up to Ayres Hall. Some said it was symbolic of the uphill battle against racism.

"We're asking for equality," UT senior Kelsey Hollis said. "I feel like when we say that there's always a but or a maybe, but all we're asking is to be treated equally, regardless of our skin color."

The speakers screamed for supporters not to grow weary.

"Because at the end of the day, there's only one race, the human race," Trey Smith said as claps erupted.

"We're ready to collect on all the broken promises that America gave Black people," Watson said. "We're fed up and we're ready for a change."

All they want is change, justice and equality every step of the way.

Voices from the march also chimed in on social media. Tennessee football's Alontae Taylor called this a successful march, Athletic Director Phillip Fulmer gave his approval of the proceedings and Chancellor Donde Plowman posted pictures with students and signs.

I’m so proud of our young men and women who organized, gathered, and executed a very powerful, successful and peaceful march today. Your voices were loud and strong! Thank you for your courage and fortitude to bring about change !