UT Chancellor: 'Together, we will unite against racism and hate'

University of Tennessee leaders are making their message crystal clear: White supremacists are not welcome on campus. 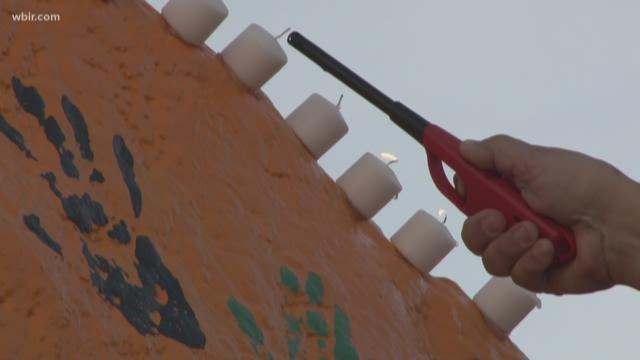 Chancellor Beverly Davenport issued the following letter to students this afternoon in regards to plans for if a white supremacist group decides to come to campus this month.

The University of Tennessee said it is working with UTPD to develop a security plan and has said they will not meet in McClung Museum if they arrive on campus. They will be reassigned to Buehler Hall with security restrictions.

Several events have been planned to educate and unite campus.

"I want to reiterate: We don't want them here. They were not invited, and they are certainly not welcome," Davenport wrote.

On Friday at 3:30 p.m., people gathered on campus for "United at the Rock Against Racism." Davenport said more events like this will be announced over the next several weeks.

On Tuesday, the Student Government Association is sponsoring a panel discussion on the upcoming white nationalist event, the hate speech surrounding that group, and how it affects campus.

On Thursday, the outreach director for the Southern Poverty Law Center Lecia Brooks will give a presentation on specific white nationalist groups, their tactics, and how to stand against hate.

Her full letter can be read here:

"As I wrote earlier this week, a white supremacist group reserved a space to meet on our campus on Saturday, February 17.

I want to let you know that after consultation between UTPD and senior advisors, we have decided that this group will not be allowed to use McClung Museum due to safety and security concerns. If they decide to gather on our campus anyway, they will be reassigned to Buehler Hall with security restrictions. UTPD has consulted with local, state, and federal law enforcement and assured me this location will provide the safest and most secure environment and minimize disruption to other activities on campus.

I am meeting daily with senior advisers, including law enforcement, as we prepare for a potential gathering. As always, the safety of our students, faculty, and staff is our primary concern. I want to reiterate: We don't want them here. They were not invited, and they are certainly not welcome.

I appreciate the outpouring of support, suggestions, and sentiments of our campus and the Knoxville community. We will continue to focus on educating and uniting our campus.

We have scheduled a number of events beginning today with United at the Rock Against Racism, beginning at 3:30 p.m. This event is sponsored by the UT Campus Ministers Council, Student Government Association, and Faculty Senate.

On Tuesday, SGA is sponsoring a panel discussion on the upcoming white nationalist event, the hate speech surrounding that group, and how it affects our campus.

On Thursday, I have invited Lecia Brooks, outreach director for the Southern Poverty Law Center, to give a presentation to our campus. Lecia will discuss specific white nationalist groups, their tactics, and how we can stand against hate.

Together, we will unite against racism and hate. "

The University of Tennessee is sending a strong message to a white nationalist group that is planning to launch a touring lecture series on the Knoxville campus later this month.

The Traditionalist Worker Party is recognized by the Southern Poverty Law Center as a hate group and is one of many within the "Nationalist Front" coalition comprised of neo-Nazis, white supremacists and neo-Confederate groups. The TWP claims it will be visiting UTK's campus on Feb. 17 as part of the "National Socialism or Death!" tour. The talk will be led by the group's co-founder, Matthew Heimbach.

The University of Tennessee System is getting ahead of the planned talks, saying the group and white supremacists in general are not welcome on campus despite having been able to reserve a space for the lecture.

UT released a Q&A about Free Speech at UT and the upcoming event, saying Heimback was able to reserve the room under the name "WALNUT" using the name of a local church as a reference. After making the reservation UT said someone called to change the name of the contact person as an out-of-state man with ties to a racial separatist group.

The church in question said they were unaware of the event and have no affiliation with the person who made the request. UT said it cannot deny members of the public to rent space at many campus facilities because it violates the First Amendment. The University said it does not base decisions to decline a venue on a person or group's viewpoint. More information about the University's response can be found at this link.

"At UT Knoxville, the white supremacist group Traditionalist Workers Party was not invited to appear on campus, but followed UT policy on use of campus facilities by non-University speakers in seeking to conduct an event," he said.

DiPietro said the Chattanooga campus has also had vandals try to cover posters for Black History Month with posters referencing Adolf Hitler. The posters have been removed because the group did not have a permit to be active on campus.

"Now, let me be clear: Every campus and enterprise of the statewide University of Tennessee system respects and upholds the constitutionally protected First Amendment right to free speech which, history has shown, also can include ignorant, repulsive speech," DiPietro said. "The statewide UT system also respects and upholds principles that run counter to hateful speech – inclusion, tolerance and civility – that I emphasize here for every person who reads these words."

You can read his full statement in the link below:

My statement on extremist activity: There's no place for hate anywhere in the #UT System:https://t.co/3mThaET0yG

On Wednesday, UT Chancellor Beverly Davenport addressed the TWP's plans to hold the event on campus, saying they were not invited and are not welcome anywhere on UT's campus. Davenport echoed a messaged painted on The Rock Tuesday directed toward white supremacists: "Stay Out."

"The message on our Rock yesterday imploring white supremacists to 'stay out' captures our collective sentiment. We do not want them here. But they appear intent on coming," she said. "We don't, however, have to give them an audience or the attention they seek."

The Rock was painted with other messages Thursday, including "Cancel TWP" and "Diversity Matters!"

Davenport said UT is planning and preparing to minimize fallout and keep people safe during the proposed event, saying leaders are talking daily with law enforcement and sister institutions.

"As I have said before, hate is wrong. Racism is wrong. Advocating for the exclusion of all but one race is clearly wrong. Also, this group could not be more wrong," she said.

Well said and I agree! Nor welcome on any of our other system campuses and facilities across the state.

UT said faculty and students are organizing discussion sessions and special seminars directed at combating racism and hate. On Friday at 3:30 p.m., people will be gathering on campus for "United at the Rock Against Racism." Davenport said more events like this will be announced over the next several weeks.

In the event announcement to TWP members, Heimbach claimed the event will follow the example of American Nazi Party founder George Rockwell to bring "the message of Nationalism Socialism" to university campuses across the country, calling universities "centers for Jewish intellectuals" and "the most radical forces of the anti-white leftist movement."

Heimbach said he hopes for a "fruitful and respectful exchange of ideas" at the session, which will limit access to 'vetted nationalist comrades' and select students and faculty allowed entry by the TWP.

UT has dealt with a few issues dealing with outward hate speech on campus since the start of 2018. On Jan. 22, students woke up to The Rock being painted with symbols and speech associated with white supremacist groups, including the TWP.

The Rock at the University of Tennessee; photo taken by UT professor on January 22, 2018: pic.twitter.com/8hpzblEBKS

At the time, Davenport encouraged students to take immediate action to reduce displays of hate speech, particularly on The Rock. Here's the letter the chancellor released at that time:

In the past month, our Rock has been painted several times by a self-described racial separatist group. At the core of their beliefs are racial segregation, prejudice, bigotry, and exclusion. I know many of you have been offended by their presence on our campus and what they have written on our Rock. Please know I share your sentiments entirely. I find their values and teachings despicable, hateful, divisive, and incendiary, and as I have said before, they are completely at odds with our Volunteer values and ethics.

Across the country, white supremacist groups are targeting colleges and universities, hoping to promote their beliefs and recruit members. Groups like the one that has been writing on our Rock have been described as being closely aligned with neo-Nazis and other hardline racist organizations. They are coming to our campuses precisely because of our commitment to inclusion and our mission to promote free speech.

Even though the First Amendment to the Constitution protects hate speech, that does not mean we must remain silent about it. In fact, we have a responsibility to condemn what we know is wrong. Hate is wrong. Racism is wrong. Advocating for the exclusion of all but one race is clearly wrong.

So I encourage all of you to be guardians of our campus. Protect it and make it a symbol of what you honor and love. Take care of it and each other. Be mindful of what’s hurtful and hateful. If you see something hateful or hurtful on the Rock, say something and/or enlist the help of others to paint over it.

If your classmates, colleagues, or friends feel vulnerable or targeted, reach out to them and to us. Support them. Make sure they know they are valued and protected. Kindness matters. Words matter. Support matters.

This is our campus and our community. It’s on us—all of us—to make it our University of Tennessee. We will not stand by and let those words and symbols define us. We will be defined by our stance against words, actions, and deeds that demean, threaten, divide, and harm our campus community. Here in Knoxville, in a place we call Rocky Top, we are all torchbearers for a just, welcoming, and safe campus. We are all Volunteers for life.