UT hikes the Hill in heels to spread awareness about sexual assault on campus. 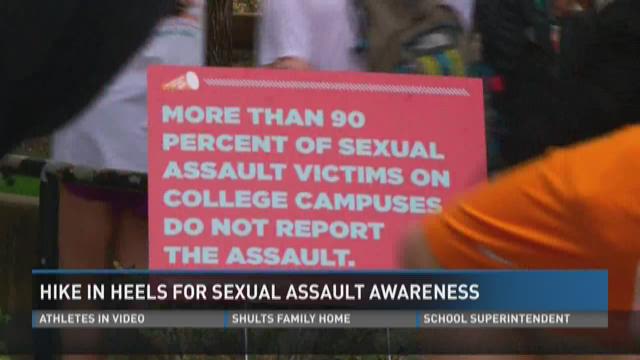 (KNOXVILLE) University of Tennessee students marked the first day of Sexual Assault Awareness Month by hiking the Hill on campus in heels.

More than 200 students and staff made the hike, wearing high-heeled shoes to feel off-balance.

“We put the focus on being uncomfortable, and the shoes are just a metaphor for that," UT Health Education and Wellness Center Director Ashley Blamey said. "A lot of people come out and won't be able to wear heels for various reasons and we are totally fine with that. The goal is just to take the time and be mindful of this issue and to be engaged in the topic in a way that's different."

Both students and athletes felt it was critical to participate in the second annual event, as UT faces a gender discrimination lawsuit, which accuses the university of having a culture that protects athletes from bad behavior.

“This isn’t like a joke when you see those signs on campus," UT student Tiffany Tavares said. "Consent means this and whatever – there’s like a lot of jokes about that. But it’s a big deal. This stuff really does happen and people need to take it seriously.”

Tavares is a tennis player for the university, and said the presence of athletes made an important statement.

"It really is comforting to see guy sports and girl sports here coming together and saying this is something that needs to be addressed,” she said.

"When we go out to tournaments, we go out to games, competition, we represent the University of Tennessee, so it's really good to be a part of it," UT student and golfer Juan Carlos Serrano Guevara added.

However, Blamey, who's also a deputy Title IX coordinator, said the "Hike the Hill in Heels" event didn't happen just because of the pending lawsuit.

"This is an issue that faces college campuses across the nation," she said. "It's not in response to anything. This is our commitment long term."

But students said it felt the university was moving in the right direction.

"A sexual assault culture here at UT is real, and ignoring it is only contributing to the problem," Tran said. "It's better to address it and then start fixing it."