Knox County still must clear the lease deal. The UT System would sub-lease six floors of the tower from the county. 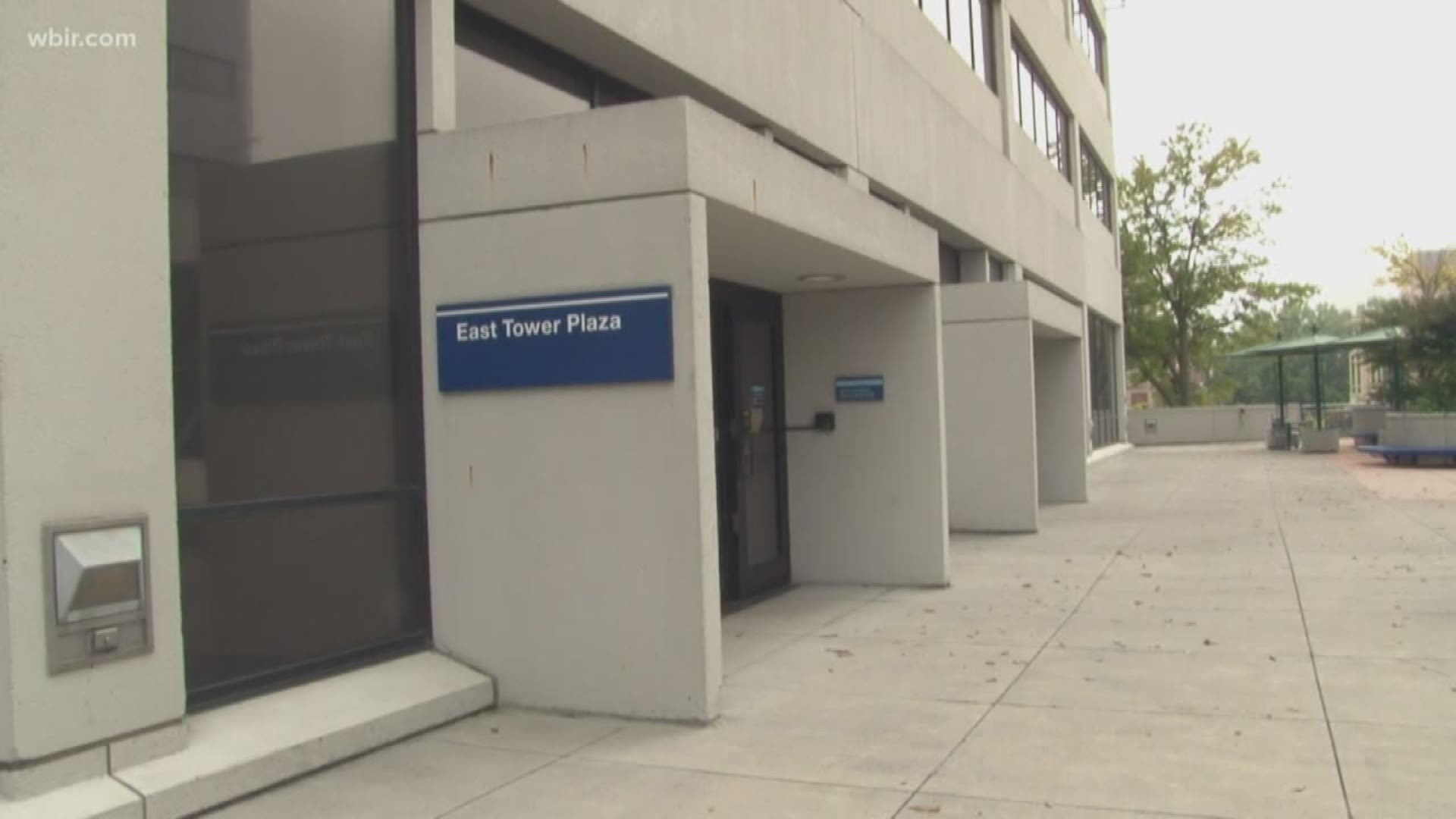 KNOXVILLE, Tennessee — The University of Tennessee Board of Trustees cleared the way for a possible move to the TVA East Tower downtown, contingent on Knox County sealing the deal as the main tenant.

The board's Finance and Administration Committee reviewed the potential move Friday morning at a trustees meeting in Knoxville. They agreed to let staff and CFO David Miller start preparing all the contracts and agreements that would be needed to sub-lease six floors of office safe so they could move system personnel from several different Knoxville locations to the tower at the north end of Market Square.

But any move depends on Knox County Commission and the Knox County Board of Education authorizing the county to lease the tower's 12 floors for at least 15 years. The idea is to centralize county school system offices in the building, moving them from the Andrew Johnson Building on Gay Street.

Some school board and commission members have questioned and resisted the idea.

Boyd actively pushed for the move behind the scenes. He touted it Sunday morning on WBIR's "Inside Tennessee".

"For the University of Tennessee, it would be a great opportunity to bring everybody together in new space," Boyd said. "I think it also would be great as a way to bring TVA, UT, the city and the county all in a closer proximity so we can strengthen that relationship."

UT has talked internally about making such a move for years. Knox County leaders including Mayor Glenn Jacobs and former mayor Tim Burchett have held ongoing talks with TVA about securing an easement for nearly two years to put it in place.

Much of the tower has been empty for years, although TVA, the federally authorized utility giant, has continued to maintain it and even upgrade it.

It contains more than 200,000 square feet of open office space. There's room for kitchens and conference space on each floor.

Knox County could get the space for what many consider a steal.

Jacobs said it could lease the building for 37 cents a square foot. That's a fraction of what downtown office space goes for today.

The county would have an initial 15-year deal with five options covering another 25 years. It would have to cover costs to prepare the space for move in.

In addition, TVA would throw in its nearby Summer Place office tower and parking garage for $1.6 million. The building has 700 parking spaces at a time when parking has become a desirable asset downtown. It also has some rentable space that's now occupied by a paying, income-producing tenant.

UT would sub-lease about 105,000 square feet from the county on six floors. County school personnel, and a few other offices, would take up the first six floors.

The base rate for UT would be $1 a square foot annually, to be escalated at 1 percent a year.

"In addition, the University would pay actual annual operating expenses estimated to be less than $5 per square foot in 2019," according to an agenda memo.

"The space would require tenant improvements at the cost of approximately $125 or less per square foot."

Boyd told 10News that UT must act soon because of its own building needs.

Most system staff are in the Andy Holt Tower on the Knoxville campus. It's a 50-year-old building that needs refurbishment and upgrades which amount to perhaps $51 million, he said.

For example, it needs a new HVAC system.

"Everything is outdated," he said. "It takes eight years to fix it so we've got some issues we have to solve for."

Moving out of Andy Holt eventually would free that space up for other campus uses.

In addition, UT has to move people who now work at the old conference center on Henley Street to make way for a move by the Audiology and Speech Pathology Department, which has to get out of Neyland Stadium ahead of renovations there.

The department takes up about 20,000 square feet, Boyd said.

There also are employees scattered at the Metron Center building off Cumberland Avenue and employees located in a old warehouse off Middlebrook Pike, he said.

Administrators envision perhaps at least a 20-year lease in the tower, documents show.

"The system administration estimates that the cost of relocating to the TVA East Tower (for 20 years) is about half the cost of finding alternative rental space for personnel at UT Conference Center and performing necessary renovation at (Andy Holt)," the memo states.

Staff is recommending trustees approve the sub-lease in principle -- dependent on the county going through with the deal.

It's being asked Friday to give CFO Miller the green light to work out all the agreements and present them to the trustees for final approval.

The sub-lease also requires approval by the State Building Commission in Nashville.

"Right now, the county has to get their lease done first before we really can have serious conversations," Boyd said.

Jacobs, Chris Caldwell, the finance department director, and other staff are working on that right now.

Jacobs and Caldwell showed off the building to media last week. They've been preparing contracts to present to the commission this month.

Caldwell said if the deal wins approval, the move would take time. A few county offices or departments could make the move in time for school next fall, but others would have to follow gradually.

The AJ Building, which the county owns, has been the home of school system administrators more than 25 years, according to Superintendent Bob Thomas. It's an old hotel that dates to the late 1920s.

Space is chopped up with some school departments spread across multiple floors.

Burchett wanted to sell the building so it could go back on the tax rolls. A Nashville developer has pitched a proposal that calls for buying it for $6 million and redeveloping it into a boutique hotel.

Some critics have questioned whether the county would get full value with such a price. Jacobs said the bid likely is about as good as the county can expect and actually might be higher than what would be offered today.

The building will require millions for renovation, whatever its future use, according to Caldwell.

Some commissioners have questioned whether the move to the TVA tower will block the public from gaining access. Public meetings would continue to be held at the City County Building.

The public could gain access to the building after passing through TVA screeners. TVA has a higher security screening process than the Public Building Authority, which now handles building access at the AJ.

Jayne Burritt, PBA chief, said an estimated seven to 15 members of the public access the AJ Building a day now.