Verify: Are more threats made after mass shooting events?

10News sought to figure out: do more threats happen after mass shooting events, or are we simply more sensitive to threats? 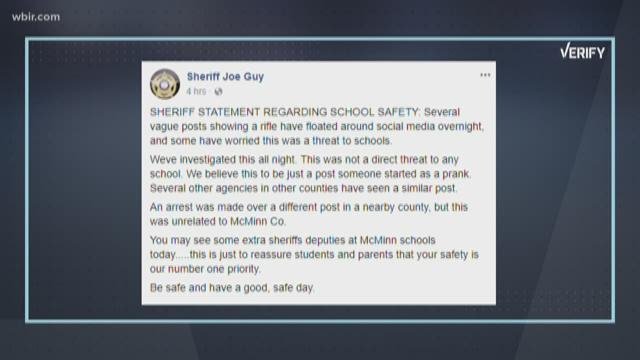 McMinn County Sheriff Joe Guy said Friday there were no specific threats to any schools after posts showing a rifle floated around on social media. But some students saw an increased police presence at school.

So, are there more threats made after a mass shooting event? 10News took this question to former FBI agent Ricky Hill.

Hill said yes, there are more threats, but the reason why is two-fold.

"We do notice there's an increase in the number of threats that are coming in, and that comes in two versions," Hill said. "The first version being there has been an increase in threats, but also there's a greater awareness during that time, and so people are reporting them more readily during those periods right after a major event like in Florida."

10News considers this claim to be verified.

Hill added social media plays a significant role in threat investigations. He said to report any threats you see to police, as they take all threats seriously.