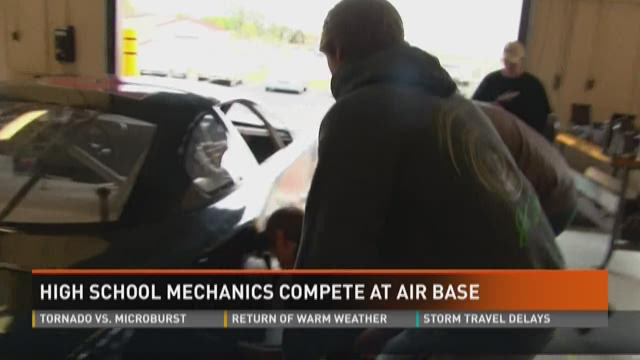 Area vocational students squared off against each other in the Top Wrench competition on Thursday.

The 134th Air Refueling Wing hosted the students on base, challenging them in areas such as a pit crew race, basic engine troubleshooting, and analyzing a troubled engine using computer diagnostics.

Students in the pit crew race were asked to change a tire on a race car as quickly as possible. Sevier County High School junior Dakoda Cardwell explained that he was looking forward to the pit crew challenge, "to see how well I'm going to do, because I have practiced for it."

Cardwell's team was able to shave two seconds off the winning time to take the lead, but later lost that lead to a team from Union county.

During the engine troubleshooting challenge, air base crews would bug the ignition system of an engine, and students had to repair that engine and successfully start it up. Similarly, students used computer diagnostics to troubleshoot an ailing engine on a late model pickup.

The skills used in this competition help foster teamwork, communication, and problem solving, according to organizers.

"They're a prime example of what we need in the Air National Guard," said Master Sgt. Richard Payne. "They're mechanically inclined, they're motivated and they're a perfect fit for the 134th Air Refueling Wing."

After competing, the students were given tours of the air base, exploring military aircraft, and checking out some new and vintage cars. Top Wrench also offers scholarships for selected students to attend the Tennessee Technology School in Knoxville.