Nostalgia runs deep for people who remember the 1982 World's Fair in Knoxville, and some local brewers are betting they'll be excited to get a drink from the past. 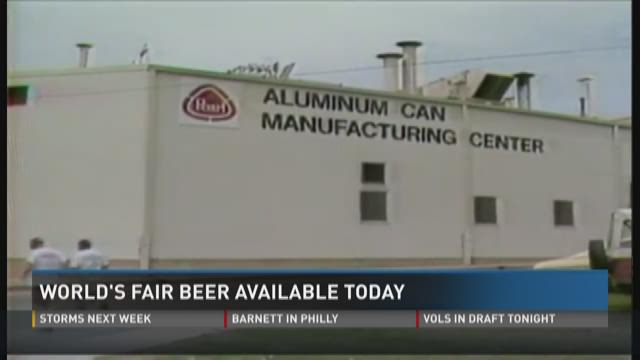 Thirty-five years ago, the world came to Knoxville for the 1982 World's Fair.

More than 11 million people came to town to enjoy exhibits from 22 countries, a midway full of rides and unique food and beverages.

Nostalgia runs deep for people who remember the six months when the fair took over parts of downtown Knoxville, and some local brewers are betting they'll be excited to get a drink from the past.

Rick Kuhlman came up with the idea of World's Fair Brew back in the '80s. It was a light lager, brewed in another state, that sold for six months in Tennessee.  Now, he's part of the team that's bringing it back.

The 2017 version of World's Fair Beer will be labeled the same, but there are some differences. This time around, it is a pale ale, brewed right here in Knoxville.

"In 1982, it was a collector's item and if you drank it, you were doubly sorry. One - it tasted terrible. Two - you ruined the value of your collectors item. We're bringing it back on tap so that people can taste it and know that this is a really great beer," said Harrison Collins, a member of the World's Fair Beer team.

Here's how the brewers describe it: "Smooth and approachable, but also bold and flavorful enough for those who crave an experience every time they crack one open. It has a deep orange color like a sunset over the Smoky Mountains. The aroma is bright like the reflection of the Sunsphere in the summertime. The flavor is bustling with tropical and piney hops. This beer greets you with a fruity aroma and finishes with a restrained bitterness, balanced with a crisp flavor."

The beer will soon be available at Fieldhouse Social, Cool Beans, Half Barrel, Carolina Ale House, Back Door Tavern and Three Jimmy's.

More information will be available here.

The relaunch of the beer will be the subject of a documentary produced by documentary students in UT's School of Journalism and Electronic Media.

Students get the entire semester to create a seven to 12 minute film, and one group picked the beer's revival as their subject.

Their professor said the idea started when they heard about the beer from a friend who was involved in the reboot.